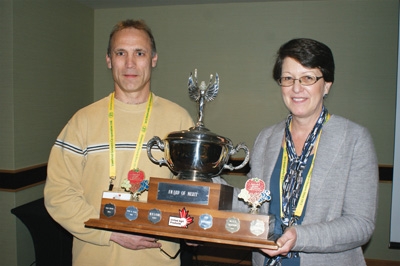 University of Guelph researcher Becky Hughes was surprised and “very, very honoured” to be the recent recipient of the Ontario Berry Growers’ Association (OBGA) Award of Merit presented during the organization’s annual meeting held in mid-February.

“I’d like to thank you very much,” she said after coming forward to accept the large trophy. “I’m very honoured. I would have to say of all the groups I work with, I really enjoy working with the Ontario Berry Growers’ Association.

Not only are you very organized but you’re enthusiastic and it’s a young group who’s willing to innovate. I’ve really enjoyed working with you over the last 25-some years.”

Hughes, who has a bachelor of science in ornamental horticulture and a masters degree in plant physiology, both from the University of Guelph, is the manager of the Northern Horticulture Research Unit, known to the berry industry as the SPUD unit, at the New Liskeard agriculture research station in New Liskeard, Ont. She has been with the SPUD unit since it began producing nuclear seed potatoes for the Ontario seed potato industry in 1984.

John Cooper of Strawberry Tyme Farms, located near Simcoe, Ont., presented the award to Hughes and shared some of the work she has done with the OBGA over the years.

“It is under the leadership and guidance of Becky Hughes that the OBGA has been able to achieve the status it has in the micro-propagation industry in North America,” said Cooper.

In the mid-1990s, the propagation program for small fruit in Ontario had become very fragmented. Parts of the program were being carried out in Harrow, Ont., and Vineland, Ont., as well as a bit in New Liskeard, Cooper explained. The OBGA approached Becky to see if the organization could move the facilities it was using in Harrow and Vineland to New Liskeard and amalgamate everything in one location.

“A deal was worked out and the OBGA invested in a screen house facility at the site in New Liskeard so Becky could take full control of the beginning stages of the propagation program, said Cooper. “Since this move to New Liskeard, the OBGA – along with input from Becky, Pam [Fisher] and [Dr.] Adam [Dale] – have designed a program that is second to none anywhere in the world.”

At the New Liskeard facility, Hughes is responsible for heat-treating, virus indexing, tissue culture production, DNA testing and storage of cultivars that are no longer being used in the OBGA strawberry breeding program.

“She has designed a program that is industry leading and this program has been adopted by the Florida Strawberry Growers’ Association as the model with which they want to move their industry forward,” said Cooper.

Hughes has also been involved in numerous small fruit research projects as part of the berry research team in Ontario.

“My first contact with the Ontario Berry Growers’ Association was [John Cooper’s] dad [Gary Cooper], when he was chair of the research committee for the OBGA and I was a researcher in Northern Ontario looking for some funding to put in an observation trial,” recalled Hughes. “I hate to say how many years ago that was but I’ve been doing the observation trials since 1983.”

Hughes has been involved in many published projects and research showcased on poster boards at conferences across North America. “In fact, she’s been involved in so many projects that I couldn’t list them all here because it took six pages when I printed it off,” said Cooper.

The OBGA does not present the Award of Merit every year. The award is presented on the occasions when a member of the industry performs a job or service that demands recognition.