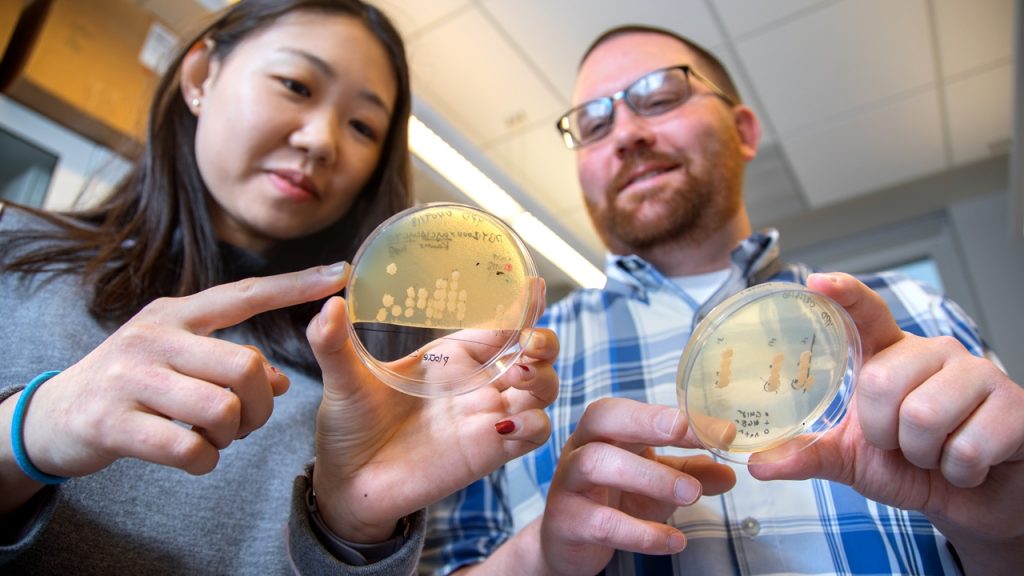 Patrick Gibney, assistant professor and the E&J Gallo Sesquicentennial Faculty Fellow in the Department of Food Science, is applying his expertise in yeast biology to improve production across the wine industry. Cornell University

The single-celled organism responsible for turning sugars into alcohol experiences stress, which changes its performance during fermentation. For vintners, stressed yeast introduces difficult production dilemmas that can change the efficiency and even flavour during winemaking.

Patrick Gibney, assistant professor in the department of food science at Cornell University, is on a mission to help New York state wineries. Gibney is working out how metabolic pathways within a yeast cell determine those changes, with implications for how wine is produced.

“Yeast has many significant, perhaps underappreciated, impacts on the public,” said Gibney. “It is critical for producing beer, wine and cider. Yeast is also a common food ingredient additive and is used to produce vaccines and other compounds in the biotech industry. This tiny organism has an enormous impact on human life.”

Yeast has a long history as a model to understand the inner workings of eukaryote cell biology. Gibney, who has been researching yeast for the last 15 years, is interested in factors that affect whether cells become more resistant to stress.

“In other industries, product uniformity is prized, but for winemakers, the year-to-year variations are often more valuable,” Gibney said. “There are dozens of fungi and bacteria that could all make the process go very wrong – or they might add combinations of flavors or odors that are really good. It’s very complex.”

Gibney is collaborating with E&J Gallo Winery scientists and research teams as he applies his expertise in yeast biology to improve production across the wine industry.

In the summer of 2017, the company invited Gibney to meet people involved with wine production from different perspectives: microbiology, quality control, systems biology, and chemistry. Those conversations are already reaping benefits, as Gibney has outlined several major projects for which he and Gallo scientists are crafting research plans.

One project would tackle sluggish fermentations. “Sometimes you’re fermenting and it slows or stops completely. It’s often a microbiology problem,” Gibney said. He plans to gather samples from New York state wineries that have had this issue and inspect them at their most basic levels.

For Gibney, the research is an opportunity to benefit the wine industry in New York and beyond.

“It’s exciting to contribute to the scientific research already coming from CALS and help make advances that will help winemakers innovate with their products,” he said.