News
Which direction are herbicides heading? 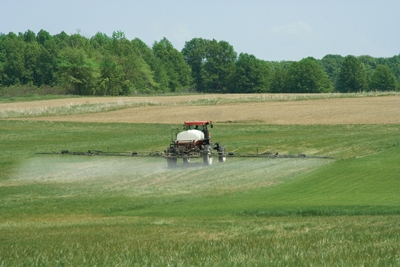 Some farmers are concerned about going back to 2,4-D and other auxin herbicides because they are considered old compounds that tend to drift and move off-target to sensitive plants.

2,4-D is coming back. What many might consider a dinosaur may be the best solution for growers fighting weed resistance today, said Dean Riechers, University of Illinois associate professor of weed physiology.

“Farmers can’t imagine going back to 2,4-D or other auxin herbicides,” Riechers said. “But herbicide resistance is bad enough that companies are willing to bring it back. That illustrates how severe this problem is.”

In a recently published article in Weed Science, Riechers and his team of research colleagues suggest that tank-mixing auxinic herbicides with glyphosate may be the best short-term option available to farmers interested in broad-spectrum, postemergence weed control.

“Resistance has become a big problem,” Riechers said. “In 1997, researchers predicted that glyphosate resistance would not be a big issue in Round-Up Ready crops. For the most part, they were right. But they underestimated a few weed species and resistance mechanisms.”

Ideally, chemical companies would come up with a new herbicide to fight these resistant weeds. But new herbicide development is expensive and time-consuming. Riechers said he does not know of any new compounds on the horizon.

“If we don’t find completely novel and new herbicides, our next best bet is to mix glyphosate and another herbicide with relatively minor resistance problems,” Riechers said. “Auxin resistance is not considered a huge problem in the United States, particularly in corn, soybean and cotton. It has only occurred in isolated incidents.”

Why have auxinic herbicides escaped the resistance problems of the more modern herbicides used today?

Riechers said there are three major reasons that help explain why resistance to auxin herbicides has not become a big problem yet. First, the auxin family of herbicides has a very complicated mode of action. In theory, a weed would have to develop a very complicated resistance method to overcome it. Riechers said the auxin herbicide family is very unusual because it has multiple target sites, which were only recently discovered.

“In addition, resistance to these compounds is rare because a plant that evolves resistance may have a fitness cost,” he said. “The resistance mechanism that overcomes the herbicide could have a negative consequence to the plant in absence of the herbicide. Basically, for auxin herbicides there may be a ‘penalty’ to having resistance.”

The third explanation is that auxin herbicides have rarely been relied on by themselves and are normally mixed with other herbicides. A good example is the frequent use of several auxinic herbicides in tank mixes for weed control in home lawn care and golf course applications.

Some farmers are concerned about going back to 2,4-D and other auxin herbicides because they are considered old compounds that tend to drift and move off-target to sensitive plants. Riechers said Monsanto and Dow AgroSciences have announced that they are working on new formulations to reduce drift, and agricultural engineers are exploring spray application technology to reduce the problems, too.

“This is a risk/reward decision,” Riechers said. “If you have a huge resistance problem in your field and are concerned about losing yield, this may be your best solution for now. The alternative is to give up and do nothing. For some growers, this technology may be worth the risk because they have no other choices.”

So the question remains – how long will it take for plants to form resistance to the combination of auxin herbicides and glyphosate?

“We are trying to predict the future, but all we can do at this point is speculate,” Riechers said. “However, we can use the past to help us make wise choices for the future. We have resistance to almost all herbicide families now. Tank-mixing auxin herbicides with glyphosate may work for the short term, but I expect that auxin resistance will likely increase over time. Nature always finds a way.”

Until the next novel herbicide comes out, Riechers said you only have to look back at what happened with glyphosate to see how important it is to be a good steward by using herbicides in a sustainable, beneficial way.