Nova Scotia looks to strengthen its local economy and reduce reliance on imports through supporting farms in the change from field raspberry production to long cane berries. 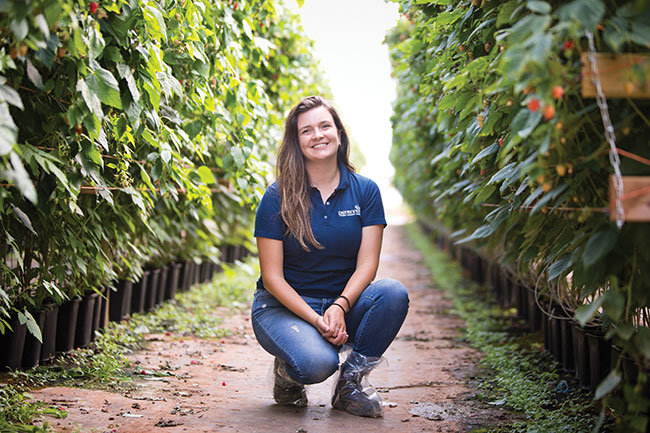 Currently, raspberry and blackberry acreage in Nova Scotia is estimated to be about 100 acres, with a farmgate value of approximately $1 million. Despite a good market and price potential for local producers, most raspberries sold through the four major retailers in Atlantic Canada are imported from elsewhere. Total annual consumption of raspberries in Atlantic Canada is estimated at 1.5 million kilograms (kg), with 600,000 kg of that sold in Nova Scotia. With limited growth in the industry over the last few years, innovation and re-evaluation of current production practices is necessary to re-invigorate local production and meet the growing demand for raspberries.

Recognizing the significant opportunity surrounding bramble production in Atlantic Canada, the Nova Scotia Department of Agriculture teamed up with Horticulture Nova Scotia and Perennia Food and Agriculture to launch a two-year pilot program to support farms in their adoption of the novel production system for long cane raspberries. An alternative to field-grown berries, long cane raspberries are grown in semi-permanent tunnels using a soilless substrate as the growing medium. Vital Berry Farms in Centreville and Webster Farms in Cambridge were the two successful applicants to the Nova Scotia Long Cane Raspberry Pilot Program.

The main goal of the project is to increase local raspberry production to alleviate Nova Scotia’s reliance on imports and strengthen the local economy. Using this setup, producers can harvest raspberries for a period that is four to five times longer than a traditional setup, meaning a larger market share for local farms. This novel production system will also help to safeguard local producers as climate change challenges current food production practices.

There are a few key differences between a traditional raspberry setup and the novel long cane production system:

The plant stock purchased from the nursery consists of fully grown canes, which are held dormant until it is time to plant. Once pulled from storage, these canes can produce a crop within weeks of planting. Controlling the dormancy period allows for staggered planting dates, which will effectively extend the harvest of fresh berries on farm. The 2022 growing season saw the first batch of canes planted in April. The first harvest took place on July 1, with continual harvests since then. The final harvest in 2021 took place Oct. 31 – by that projection, we have four full months of raspberry harvest compared to a traditional window of three to four weeks.

The long cane raspberry production system facilitates a transition from soil to containerized production filled with soilless substrate. This allows for the precise and timely delivery of water and nutrients to best support the crop throughout the season. With rising fertilizer costs and uncertainty around water availability in some regions, ensuring that these inputs are realizing their full potential is extremely important.

Long cane raspberries are grown under the protection of high tunnels. Soft fruit are extremely sensitive to precipitation. Farmers have routinely suffered significant losses due to unavoidable weather events. Creating a physical barrier between the crop and Mother Nature has significant implications on berry quality and shelf life. Yield forecasting and projections for retailers become much more reliable, and the percentage of unmarketable fruit can be significantly reduced.

Long cane raspberry allows for the introduction of new varieties, as well. As in most of Canada, winterkill is an important selection factor for outdoor operations in Nova Scotia. Removing the requirement for survival through harsh winter conditions comes with a lot of opportunity for the producers and local consumers.

Two varieties focused on through the duration of the project have been Kwanza and Tulameen, which have yielded large, tasty, high-quality berries so far. Both varieties have been characterized as producing fruit with an average weight of 5 grams per berry (g/berry). Early harvests off these canes can produce raspberries up to 8 or 9 g/berry, making them significantly larger than traditional varieties, which typically weigh in around 3 g/berry.

“We were very happy with the fruit quality from the Tulameen raspberries. Berry size was larger, we had sweeter berries with excellent coloring, and our customers were always demanding more,” says Jordan Eyamie, farm manager at Webster Farms. “Our yield was also approximately three times that of our field raspberries.”

This new raspberry production system comes with a handful of other benefits, many of which are generally associated with making the switch to protected and containerized production. •