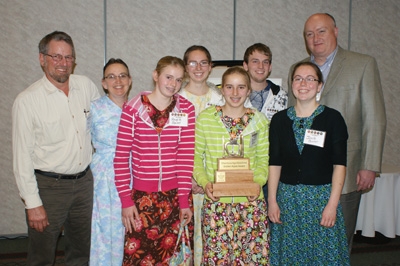 In a perfect world, six Golden Apple Awards would have been presented at the 2012 Nova Scotia Fruit Growers’ Association’s annual convention to Cynthia, Douglas, Aylesa, Janelle, Angela and Jennifer.

Instead, five of the six Penner children watched their father, Rene Penner, receive the 2012 honour from Kevin Brost of Chemtura Agrosolutions (formerly Uniroyal).

Each of Rene and his wife, Janice’s, children was given their own orchard row to manage on the family’s Welsford, N.S., farm.
“Their response when they found out their father would be receiving this award was: ‘What, they think that dad did this?’” said Brost during the award presentation, held in early February.

This year, the award was presented for the best managed block planted under the Honeycrisp Orchard Renewal Program, a five-year, province-wide apple replant program funded by the NSFGA and the Nova Scotia Department of Agriculture.

The Penners moved to Nova Scotia from Western Canada in the early 1990s and purchased a local farm in 2004, which consisted of pasture land and about 18 acres of old apple orchard.

“Since then, all but seven acres have been replanted,” said Brost, adding that Honeycrisp was one of the first varieties planted by Penner, followed by Jonagold, Ambrosia, Gala and Sweet Tango. “The tree fruit acreage on the farm has grown from about 15 acres to 25 acres, almost doubling in size.”

This is a big accomplishment considering Penner had no previous experience growing apples.

“He dove right in, putting his electrical business on hold for a year while getting the apple growing enterprise underway,” said Brost. “He began attending as many grower meetings and field days as he possibly could and, with the advice of specialists, learning to the very best of his ability.”

Penner has done some experimenting on his farm and has an apple tree that’s been grafted with 13 different apple varieties as well as a plum, pear and peach.

“He has had reasonable success with his grafting,” said Brost. “In addition to a good apple crop, the tree produced two pears.”

He also went against the advice of industry specialists and planted two hectares of marginal land – described as totally unsuitable for an orchard – to Gala and Sweet Tango. Extensive land preparation was carried out, including subsurface drainage, deep ripping and ridging, which “changed the site rather dramatically,” said Brost.

“That site used to be classified as a wetland,” one grower heckled from the audience to a loud burst of laughter.

The Golden Apple award has been presented annually in Nova Scotia since 1969. It began as a series of awards from Uniroyal that were presented every year for the top quality in every crop group – from apples to wheat. Golden Apple Awards are also presented in other regions where apples are grown in Canada, including Ontario and B.C.

A number of Nova Scotia growers were nominated for the 2012 award. During the 2011 growing season, the nominated orchard blocks were visited by industry specialists who looked for the following attributes:

“These are the things that go into managing an orchard,” said Brost. “You want to have a good, all-around orchard.” ❦