detected by CFIA in Alberta

The Canadian Food Inspection
Agency (CFIA) has completed the testing of Alberta seed potato fields
for 2007. Results from more than 8,700 soil samples have not confirmed
the presence of a detectable potato cyst nematode (PCN) population. 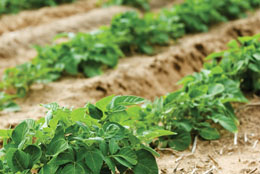 The Canadian Food Inspection Agency (CFIA) has completed the testing of Alberta seed potato fields for 2007. Results from more than 8,700 soil samples have not confirmed the presence of a detectable potato cyst nematode (PCN) population.

Soil samples were collected and tested for PCN as part of the joint PCN certification protocol for all seed potatoes traded between Canada and the United States, an agreement signed in March 2007.

The CFIA and the USDA placed temporary restrictions on the movement of potatoes from Alberta to the U.S. in November pending soil test results. On Dec. 3, 2007, Mexico’s Ministry of Agriculture, Livestock, Rural Development, Fisheries and Food (SAGARPA) imposed temporary restrictions prohibiting the import of seed potatoes and potatoes for consumption and processing originating from Alberta.

The recently completed testing was part of an investigation initiated by the CFIA to provide domestic and international industry groups and trading partners with the assurances they required to maintain and restore market access for Alberta potato farmers. At this time, neither the U.S. nor Mexico has indicated that they will lift their temporary trade restrictions.

PCN does not pose a risk to human health, but is considered a quarantine pest. If left unmanaged, PCN could cause a significant reduction in the yields of host crops, such as potatoes, tomatoes and eggplants.

Programs are in place to provide farmers with access to financial assistance for farm income losses, including those caused by the regulatory measures imposed following suspect findings of PCN.

The CFIA, Agriculture and Agri-Food Canada and the provincial government of Alberta are working with growers, the implicated agricultural sectors, industry and Canada’s trading partners to respond to this issue and to protect Canadian farmers.

Due to the ongoing nature of this investigation, new information will be provided as it becomes available and posted on CFIA’s website at www.inspection.gc.ca. ❦