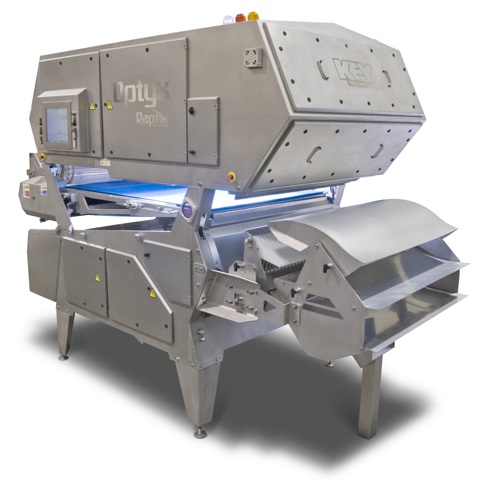 Combining Key’s colour cameras with Raptor laser technology, Optyx WPS can sort peeled and peel-on product, differentiating peel from scab, bruise, rot, and green defects. Using cameras, Optyx WPS recognizes colour, size, and shape to remove potatoes based on the presence of peel, scab, or gross defects, as well as potatoes that fail to meet user-defined standards for length, width, or shape.  Using a combination of Raptor laser technology with high resolution line scan cameras, Optyx WPS detects and removes foreign material based on the structural properties of the material, as well as visible colour.

As product passes through the sorter on the conveyor belt, it is scanned by cameras.  Product is then launched off the end of the Optyx WPS belt for in-air viewing by the Raptor laser sensor. Using image processing technology, the sorter analyzes the images, comparing each object to previously defined accept/reject standards. When foreign material is identified, the system activates the close-coupled high-speed air ejector system, which is made up of a series of high-flow valves spaced 0.25 inches (6 mm) apart that span the width of the system. While the foreign material is still air-borne, the air jets pinpoint the object to reject and precisely remove it from the product stream via the FM chute.

When off-grade potatoes are detected, the system activates the close-coupled deflectors, which span the width of the sorter. The system raises the appropriate deflectors before the off-grade potato reaches it, producing a ramp that gently deflects the potato into a higher trajectory and onto the top deck of the two-deck collection conveyor or chute. Good potatoes are allowed to pass over the lowered deflectors and gently slide onto the lower deck of the collection conveyor or chute.

The deflector design, the curved landing zones, and gradual deceleration all help avoid bruising, which is a common problem with other whole potato sorters. Optyx WPS’s impact has been measured to be equivalent to dropping a potato only 1.7 inches (38 mm) onto a rigid surface.