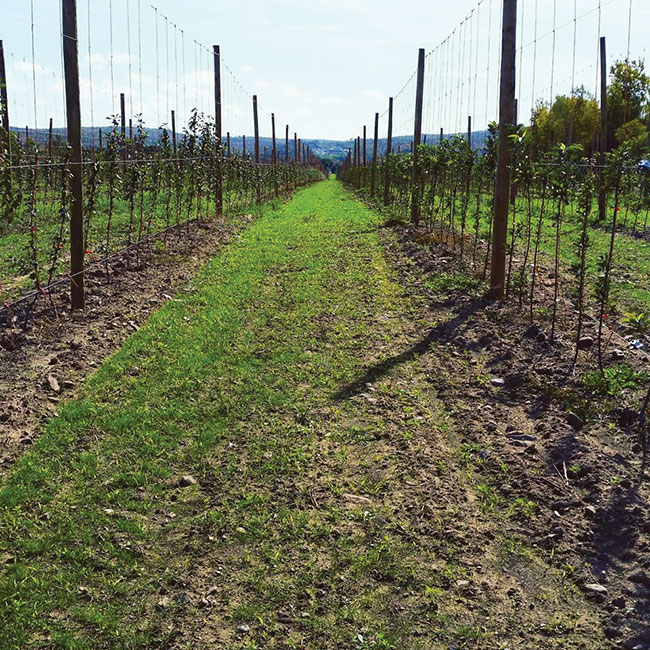 Honeycrisp and Ambrosia aren’t typically grown in the U.S. and this is a prime market point that Ocean Crisp Apple Company identified prior to the company’s launch in 2018.

It has been said that an apple led to the downfall of the Garden of Eden. Hard to believe that such a delicious, humble and diverse fruit could cause such mayhem, but apples have led to other significant changes. At least in this case, it’s for the better rather than the worse.

There are more than 7,500 varieties of apples worldwide and just a few more than a dozen have been chosen as the most commonly cultivated for commercial production in Canada. Some of those varieties (like Honeycrisp and Ambrosia) aren’t typically grown in the U.S. and this is a prime market point that Ocean Crisp Apple Company identified prior to the company’s launch in 2018. New equipment allowed for pre-sorting and packing of Ocean Crisp’s 2019 crop to ensure the freshest exports to the U.S. market.

“It is a company primarily focused on export of premium fruit into the U.S. market,” he explains. “Currently Honeycrisp, Ambrosia and Gala.”

The orchards also grow a small percentage of local and cider apple varieties and the company produces some bulk and pre-packaged fresh-pressed juice.

Sarsfield Farms is the home of Blake Sarsfield, the president of Ocean Crisp. He runs the farm with his son Alex, whose children will become the orchard’s fourth generation. As one of the first farms to plant Honeycrisp in the Maritimes, the variety (along with Ambrosia and Gala) are the primary focus of the more than 200-acre site.

High Point Orchards is owned by Sarsfield, two of his family members, Cudmore and his daughter Lee-Ann. Here, the owners started planting 250 acres of high-density apples in 2017 by GPS. They are expected to be in full production by 2024.

“High Point Orchards is over 100 acres in production and another 200 acres in new plantings,” Cudmore says. “The new plantings are premium variety Honeycrisp, Ambrosia and Gala.”

At 90-acre Centreville Orchards, high density Honeycrisp and Ambrosia apples are the focus. This was the first orchard in Nova Scotia to use concrete posts for trellis systems. In 2017, Cudmore and Sarsfield approached the family who owned the land decades ago (the Sterling family of Sterling Mountainside Farms) and with Nova Scotia Apple Sales, they bought the site together, thereby bringing a new generation of Sterlings back to it.

Growing apples is one thing, but packing, marketing and shipping is quite another. There have already been both successes and challenges in the young life of Ocean Crisp.

Prior to the 2018 launch, the company chose U.S.-based Rice Fruit Company as its partner and saw the benefits of the relationship almost immediately.

“They were integral to our success last year. They have a great relationship with their customers and are passionate about selling high-quality fruit and providing excellent service,” Cudmore says. “They launched our unknown Canadian brand with ease and quickly made Ocean Crisp a recognizable brand.”

Apples from the 2019 crop were offered through even more U.S. retailers and in addition to the Honeycrisps, there were limited Ambrosias available.

One of the setbacks the company experienced was the devastating frost in 2018 that destroyed High Point Orchards’ crop. All of the orchard’s fresh fruit was lost and just two per cent of the crop was salvageable for processing.

“We had a reduced crop, essentially half of what was expected,” he explains. “A smaller crop was challenging, but it also gave us a chance to hyper-focus on our launching strategy.”

“The MAF line is a state-of-the-art system that has technology that is the first of its kind in Canada,” Cudmore says. “The camera system detects internal and external defects and the water filtration system is part of that first-in-Canada technology.”

“The flumes for the fruit are half as long as what you would typically see,” he says. “And we will be able to double-stack our fruit in the flumes to reduce the building footprint.”

Treating apples gently is key to longevity and shipping. The new system is designed to achieve this without adding to resource use. Cudmore notes that water is often taken for granted in a place like Nova Scotia, but conservation was a “vital part” of the company’s decision-making process for the new system. This new system filters the water, so instead of needing regular flushing and refilling of thousands of gallons of water, Ocean Crisp will only be refilling once or twice a season.

“Facility upgrades include advanced apple sorting and packing equipment to make the apple packing process more efficient and a modernized controlled atmospheric storage line to ensure apple longevity meets required international standards,” Witherbee, who helped fund the purchase with ACOA, says. “Other Atlantic apple producers will benefit by being granted access to the advanced equipment, which will support the province in sending premium apple varieties, such as Honeycrisp, to high-value export markets.”

Rice Fruit Company uses a similar system, so Ocean Crisp saw how the new technology would help the economic growth of Nova Scotia growers. The presort aspect of the system spots both internal and external defects, allowing Ocean Crisp to spot the internal browning common with Honeycrisp post-storage. Electronic sorting is done through scanning the apple’s exterior and selecting for diameter, colour and shape, then interior scanning ensures detection of browning, watercore and border defects in addition to measuring BRIX; 100 per cent of the fruit is analyzed. The presort and packing system provides automated feed, traceability packing and palletizing to Ocean Crisp’s specifications. This technology also allows the company to consider markets beyond North America.

Fruit from other area growers will help bring the presorting and packing line up to capacity which creates efficiency, cost savings and better Maritimes-grown Honeycrisp apples for everyone. It delivers more accurate block performance data to make changes in the orchard. Plus, it allows packers to custom-sort the fruit based on needs and market demands.

“During harvest, there is a limited window of time and finite resources and labour,” Cudmore explains. “With a presort, if we want to, we can pick the whole tree and let the sorting be done through automation. After weather events… it is positive to know that the defect detection cameras can fully assess the quality and grade of the fruit.”

This allows growers to sort out the good apples rather than assuming an entire block or segment is lost.

“To compete on a global market, we in the Maritimes need to be efficient and share resources so we can prioritize cash flow into our orchards to grow more fruit,” Cudmore says. “The U.S. is a large market and there is a lot of room for growth with Honeycrisp. Additionally, we have seen the agriculture and fisheries sectors in Nova Scotia and the Maritimes have positive growth by entering into the Asian market. We collectively, in the apple industry, need to increase production if we ever want to attempt supplying even a small region in the Asian market.”

The team at Ocean Crisp believes in working with other growers to support and benefit the industry as a whole. With Maritimes growers differentiating themselves from other area’s orchards with their “best Honeycrisp in the world” apples, they can work together to create efficiencies through sharing infrastructure and equipment that allows them to put their best apples on the world’s stage.