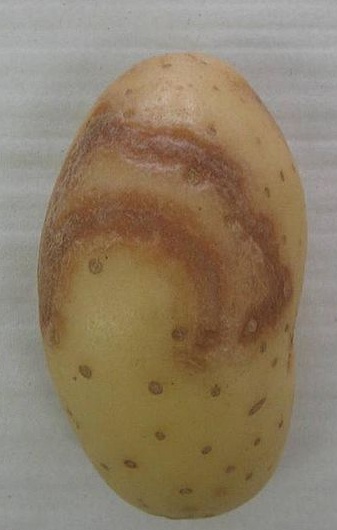 June
16, 2011, Dorchester, Ont – Superior 70 Oil, a mineral oil-based insecticide,
has received a minor use registration for application on potatoes.

June
16, 2011, Dorchester, Ont – Superior 70 Oil, a mineral oil-based insecticide,
has received a minor use registration for application on potatoes.

The
product, which has been used for several years for the control of certain
insects and mite pests on a variety of orchard crops, can now also be used on
potatoes to aid in the control of Potato Virus Y (PVY).

“Aphids
are the vector for spreading PVY in potato crops,” says Colin Smith, UAP
product manager based in Dorchester, Ont.

Superior
70 Oil works to control the spread of this potentially devastating disease by
blocking the air intake passages in aphids and ultimately suffocating them.

Smith
says Superior 70 Oil should be applied at one-week intervals, up to a maximum
of ten weeks and the
number of applications should be determined based on the severity of the aphid
population.

PVY
infection of potatoes can result in a variety of symptoms, the most common of
which is production loss and the most severe of which is potato tuber necrotic
ringspot disease, which renders potatoes unmarketable. Rates of infection for
PYV vary and are known to be a function of several factors, including the
effectiveness of vector (aphid) controls, the use of infected seed potatoes,
production practices, detection and, of course, aphid numbers, which contribute
directly to distribution and transmission of the virus.

The
product comes in a liquid formulation and a range of package sizes. Superior 70
Oil may be applied using a field sprayer and, because it is a mineral oil-based
product, can be used as part of an insect resistance management program.