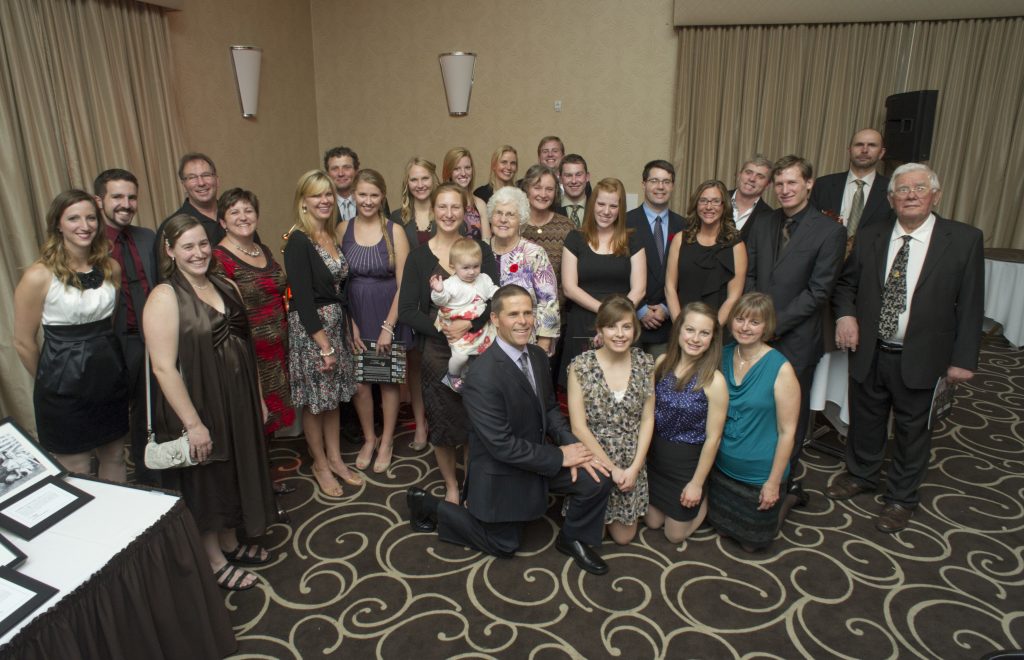 Participants and the creative team behind this year’s Faces of Farming calendar pose for a group photo at the Ontario Harvest Gala in Guelph on November 1. The gala was the site for the unveiling of the 2013 calendar. Farm & Food Care.

Nov. 5, 2012, Guelph, ON – The eighth edition of a popular black and white calendar showcasing the photos and stories of 13 Ontario farmers and farm families was unveiled at a gala in Guelph last night. The “Faces of Farming” calendar, featuring this year’s theme of Real Farmers with Real Heart, is designed to introduce the public to a few of Ontario’s passionate and hardworking farmers – the people who produce food in this province. The calendar is produced by Farm & Food Care Ontario.

With this year’s calendar, the stories of 100 Ontario farm families have now been featured within the calendar’s pages since it was first produced.

All of the calendar’s models are real, working farmers and hail from all parts of the province. As the calendar shows, there’s no such thing as a typical farmer. Their farms are as diverse as the individuals. They range in age from 2 to 78 and produce a variety of crops and livestock from lavender to poultry; fish and mink; beef, pork and soybeans, corn and dairy.

The artistic, black and white calendar photos, taken by Kitchener photographer Terry Scott White, are both dramatic and appealing, as are the farmers’ stories which include:

New this year, a QR code found on each calendar page allows viewers to scan the bar codes from their mobile devices to “meet” the farmers. Each of the codes provides a direct link to short YouTube interviews with each participant.

The calendar is sponsored by many Ontario agribusinesses and commodity groups.

Complimentary copies of the calendar will be mailed as Christmas presents from Ontario’s farmers to politicians, grocery stores, butcher shops and media.

Again this year, the calendar will be sold at all TSC stores across Ontario. It is also available through the Farm & Food Care office in Guelph, by using the online order form at www.farmfoodcare.org or by calling 519-837-1326.

For more information on each of the farmers featured in the 2013 calendar, please see below:

May – Cindy, Emma and Leah Schillings of Oshawa (Durham Region)
Sponsored by Egg Farmers of Ontario