January 26, 2009, Urbana, IL — A new, late-ripening apple named
WineCrisp™ that carries the Vf gene for scab resistance was developed
at the University of Illinois over the past 20-plus years through
classical breeding techniques, not genetic engineering.

January 26, 2009, Urbana, IL — A new, late-ripening apple named WineCrisp™ that carries the Vf gene for scab resistance was developed at the University of Illinois over the past 20-plus years through classical breeding techniques, not genetic engineering. 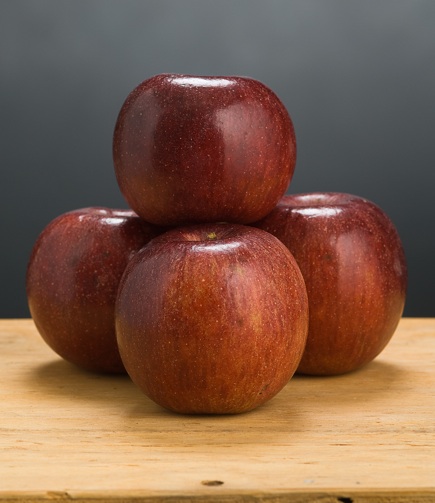 License to propagate trees is being made available to nurseries through the University of Illinois.

Being resistant to apple scab is a big plus for growers, said University of Illinois plant geneticist Schuyler Korban, as it significantly reduces the number of chemical fungicide sprays.

“Apple scab is the number one disease that growers have to spray for – 15 to 20 times per season – so not having to spray for apple scab lowers the cost for the grower and is better for the environment,” he said.

“I liked it the first time I saw it and I liked the flavour,” said Korban. “It has an excellent mix of sugar and acid and a very pleasant flavour, but I was hesitant because of the finish – it's not glossy.”

Korban thought the finish might pose a problem because consumers are accustomed to seeing waxed fruit in stores and may not like the matte finish that Korban calls “scarfy” or dull.

“Red Delicious is a very good looking apple, but has no flavour, very bland. It’s still ranked as the number one apple in the industry; however, there are more new apple varieties available now.”

After some time, Korban decided the crispness and the flavour would be more important factors to consumers than the finish and continued to develop the new apple.

His research, in collaboration with breeders at Rutgers and Purdue universities, will be published in a 2009 issue of the journal of HortScience, and a U.S. patent is currently pending. The apple is available now to nurseries that want to apply for a license to propagate trees and make them available to apple growers nationwide.

“There is a nursery in the southeastern part of the United States that really liked the apple and feel that there is a market for it in the south so they’re getting a license to grow it.”

Korban said that the tree is extremely productive and the fruit is firm, but it's not a bright red colour.

“It’s more of a dark red and looks like a deep red wine so we wanted to include ‘wine’ in the name. It also resembles an older variety that consumers are familiar with called Winesap. When you pick it up and squeeze it, it’s very firm. We used to call it ‘the Rock.’ We wanted that characteristic to be in the name so we added ‘crisp’ and named it WineCrisp™.”

"There’s a market for apples with different flavours, different textures, different ripening and maturity dates – you don’t know what the likes and dislikes of the consumer will be,” said Korban. “Some of our recent releases are varieties that focus on late ripening which would prolong the apple-growing season and WineCrisp™ matures two weeks after Red Delicious. They can be harvested all the way through to the end of October. And in good cold storage, they’ll keep for eight to nine months. That’s another important trait of this variety – it keeps very well in cold storage.”

The original cross in the breeding process was done at Rutgers in 1989. The seeds were grown into seedlings and inoculated with apple scab at Purdue. Those seedlings that demonstrated resistance to apple scab were split between the three universities as a part of the Purdue–Rutgers–Illinois (PRI) Cooperative Breeding Program, which has been very successful in naming and releasing more than 25 disease-resistant apple varieties, some with other collaborating partners around the world. Because the University of Illinois made the selection, the university will be the primary licensing institution.