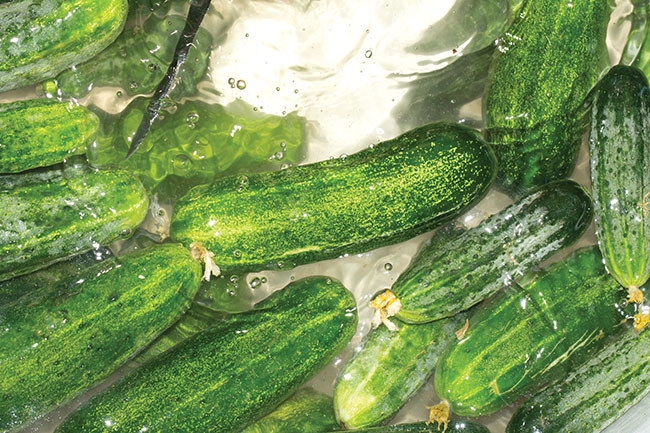 An estimated four million people in Canada suffer from food-borne illnesses each year, many associated with the bacteria that also contaminate drinking water.

While a direct connection between contaminated food and a contaminated water supply is difficult to make, the threat of contamination is significant for any farm that uses water in the processing of fresh produce between harvest and shipping.

A recent study of surface water in British Columbia’s Lower Mainland, for instance, tested 330 water samples for Verotoxin-producing E. coli, and identified contamination in 19.1 per cent. Contamination in 105 samples of produce being sold at retail was nil, fortunately, but producers nevertheless need to be aware of the risk of contamination via water.

Post-harvest, water can cool, clean, or hydrate produce; it may assist in its movement during sorting and packing; and it may even deliver fungicides to extend shelf life.

“All of these uses of water, of course, could cause contamination concern if the water isn’t of the proper quality,” Greg Komar, who served as quality assurance manager at Earthbound Farms in Salinas, Calif., during the spinach recall of 2006 said. He is now technical manager for the agriculture division of independent food safety auditor NSF International, and spoke to growers in B.C. in early 2014.

The risk of contamination makes it important to ensure that the water that comes into contact with produce is clean, regardless of its source. Statistics from the U.S. indicate that private plumbing systems account for more than half of all cases of contamination, while one third stem from the use of untreated ground water and deficiencies in distribution systems. All the sources underscore that contamination is possible, even when using treated water, making the sanitizing of water critical in mitigating contamination risks.

“The only reason for sanitizing the water is to prevent that water from becoming a cross-contamination concern,” Komar said.

“Once it’s on there, it’s on there,” Komar emphasized. “Water does not, repeat, does not remove pathogens in a significant quantity to call it anything other than washing for the sake of getting water on the product. Washing does not remove contamination. It’s critical that you guys know that.”

“To protect produce – and ensure clean water – a more sophisticated Hazard Assessment Critical Control Point (HACCP) program is required – which most operations have.”

Operators should know where they’re water comes from and the potential risks to its cleanliness. Regular testing is also important, not only as a measure of water’s safety but in order to identify and monitor weak points in the supply.

“It may show you something you wouldn’t have thought about,” Komar said. “You definitely want to pay attention to your [critical control points], make sure they’re always effective, because you could be losing a lot of product if you don’t.”

One is in cooling systems that use water. These have been identified in the U.S. as a potential source of Legionella contamination. The bacteria is air-borne, and conveniently distributed via fanned sprays designed to keep produce cool and hydrated. This water should be sanitized and the system cleaned to ensure freedom from bacteria.

Chlorine presents another set of issues. While chlorine solutions are common for sanitation, its effectiveness depends on several factors.

On the one hand, it’s pH dependent. Combined with water with a high pH, it may not work properly; it will also pose problems if the water is too acidic.

“The germicidal action of your chlorine is only 20 per cent effective at 7.5 [pH],” Komar said. “Between 6 and 7 [pH] is ideal; below 6 [pH], you start getting acidification and off-gassing of chlorine, which is a health issue.”

The effectiveness of chlorine is also compromised by dirty water.

“Chlorine loves organic matter. If you have a lot of organic matter in your water, you use up the efficacy of your chlorine instantaneously, almost,” he said.

Komar recommended changing water frequently to ensureit remains as clean as possible. A settling tank where organic matter can drop out and then be filtered prior to recirculating to rinse produce may be wise.

Above all, Komar recommended a simple system to minimize the risk of contamination.

“Keep it simple: Folks love to get that new line with all the new gizmos and doors and all the cool things – all that does is cause contamination,” he said.

Better yet, growers who can avoid washing should do so.

“In most instances, you don’t need to,” he said. “It won’t affect your quality, it won’t affect shelf life. I’m not sure why people are doing it.”