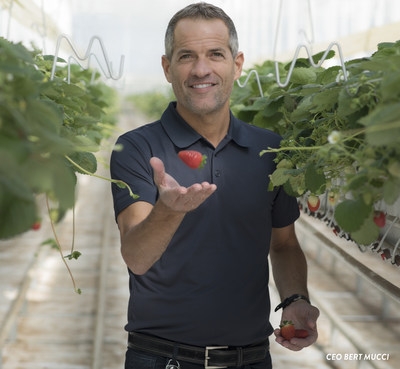 The company also announced that Phase Three construction is underway with production to begin in Fall 2018. The full project will be equivalent to more than 1.5 million square feet of high-tech glass exclusively growing strawberries, the largest in North America.

“Our strawberry program is being met with a great deal of enthusiasm from current and potential retail partners because of our emphasis on premium flavour and consistent supply,” explained Danny Mucci, vice president of Mucci Farms.

Since partnering with Dutch growers Ton Bastiaansen and Joost van Oers in January 2016, Mucci Farms has seen accelerated growth and a greater demand for greenhouse-grown strawberries.

“Overwhelming, is the best way I can describe how our Smuccies are being received,” said Joe Spano, vice president of sales and marketing. “Super sweet, clean, on the shelf within 24 hours of harvest and grown in an environment that is unaffected by inclement weather. Even better, they are grown locally in Ontario so that consumers can enjoy summer fresh strawberries during the holiday season.”

Phase Three of the expansion will include state-of-the-art lit culture technology, allowing Mucci Farms to offer strawberries during the winter months. A technology they are well experienced with, Mucci Farms also owns more than 200 acres of greenhouses, 30 of which are currently growing lettuce, tomatoes and cucumbers year-round.

“As with all of our new greenhouses, the new 24 acres of strawberries will also include the use of diffused glass which reduces stress on the plants by providing even sunlight,” said Bert Mucci, CEO at Mucci Farms. “We will continue to use high-pressure fogging systems to cool down the greenhouse in the hotter months and also install the swing gutter system which allow for the amount of maximum plants per square meter.”