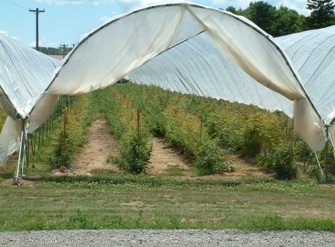 September 12, 2012 – High tunnels or hoophouses, as they are sometimes known, can serve as a tool for extending the growing season or growing crops that might otherwise be too tender for production in a cool climate. Hoophouses can lend themselves more readily to organic or low-input production for certain crops. Crops grown in high tunnels tend to have fewer diseases since the foliage and fruit are shielded from rainfall. Certain pests such as spider mites may be more severe under tunnel production, but others such as Japanese beetles tend to be less prevalent, and may only be found near the entrances of the tunnels and not further into the interior.

The Michigan State University Hoophouse website is a resource for growers, researchers and others interested in season extension or even year-round farming using high tunnels. At the site, you will find a list of workshops, a blog, videos covering several different aspects of tunnel production, resources for growers such as crop lists for different times of the year and business planning information.

Although the two hoophouse irrigation, insect and disease management workshops scheduled for September 18 and September 25 are full, there is a MSU Organic Fruit High Tunnel Twilight tour on September 17 from 5:30 to 7:30 p.m. at the Horticulture Teaching and Research Center, 3291 College Road, Holt, Mich. The tour is free and you can register online by creating an account and logging in to register.