Features Fruit Organic production
Mixing it up with cover crops

One organic vineyard in the Okanagan attributes their healthy soil to cover crops. 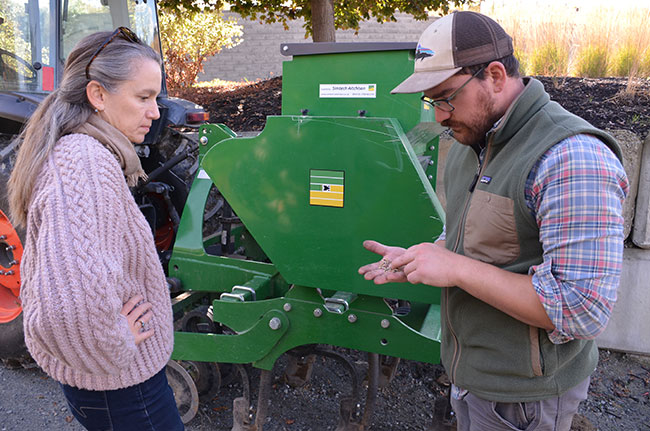 Growing cover crops in vineyards is an increasingly popular practice for Canadian grapegrowers. They have a long list of positives for viticulture but cover crops have been particularly successful for one Okanagan grower.

Gene Covert did not have to add any nitrogen to his vineyard last year and he plans to do the same this year as well. “We did really extensive soil testing in the fall of 2019 and decided that we had enough fertility in the soil that we would go for it,” says Covert, who owns Covert Farms, an organic vegetable farm and a 32-acre organic vineyard and winery, just north of Oliver, B.C. “We figured if we saw that the vines were suffering, we could add some compost during the summer, but we didn’t need to.”

Covert says the results of soil tests from late November 2020 show he will be able do the same for the 2021 season. According to him, the health of his soil is largely due to the cover crops he has been growing over the past five years.

Growing a crop to cover the soil next to a harvest crop has a long list of advantages.  Cover crops can help protect the soil from erosion, reduce soil compaction and moderate temperatures. They can improve soil structure and soil health, particularly by adding organic matter. They can improve the water penetration and water holding capacity of the soil as well as improve the biodiversity of the vineyard, which may support beneficial insects. And overall, they contribute to nutrient supply.

Having a vegetative cover between vine rows or in “alleyways” is a pretty standard practice for grape growers, particularly in B.C., where there is an industry-led sustainability certification program and upwards of 30 per cent of all vineyards follow organic principles. But what sets Covert Farms apart is their use of under-vine crops.

“We started with the under-vine plantings five years ago, partly to cut down on the six tilling passes we were doing for weed control,” Covert explains. “Now that we have stopped tilling, that’s a huge saving – not only in time and fuel, but it is also better for the environment. The more we work with cover crops, the more benefits we see.”

Covert has a plant mix that he has developed over time that suits his sandy soils and the desert-like summer conditions of the south Okanagan valley. 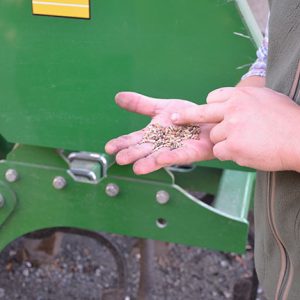 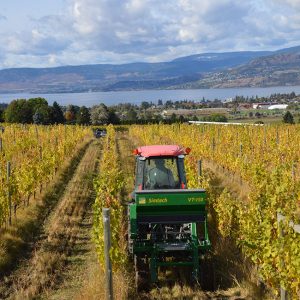 No-till seeder fall-planting in the Tantalus vineyard. Grasses planted in the summer will die out over the winter and fall-planted seeds will sprout in March. 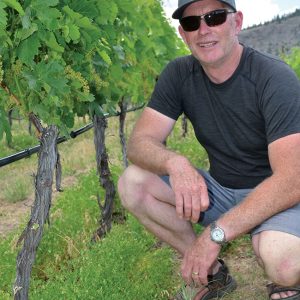 “Getting a mix that works for your conditions and the role you want it to play in your vineyard is important,” says Kathryn Carter, tender fruit crop specialist with the Ontario Ministry of Agriculture, Food and Rural Affairs (OMAFRA). She says many Ontario growers will alternate cover crops and sod between rows, but are moving more cautiously into under-vine plantings. “With our heavier soils and more moisture than B.C., we have to be careful that a cover crop is not too vigorous to interfere with the vines.”

In Prince Edward County, Ont., where growers bury their vines in winter, they need a cover crop they can easily pull back in the fall to dig in their vines and establishes quickly again in the spring, Carter adds.

Different cover crops play different roles in your vineyard. If you are looking to improve soil structure and mitigate compaction, grasses, clovers and radishes will help. Legumes produce nitrogen, and if your goal is to crowd out weeds, winter rye and buckwheat are your best bets.

Mehdi Sharifi, research scientist at Agriculture and Agri-Food Canada’s (AAFC) Summerland Research and Development Center in B.C., has worked with Carter in the past to screen cover crop mixes that would be suitable for Ontario vineyards. “It’s a topic that everybody is interested in, but it’s a lot of work,” Sharifi says. “For the studies I am doing in the Okanagan right now, I have 280 separate plots on the go at once.”

Covert Farms has three different seeding regimes: one for fall, early spring, and early summer. A no-till seed drill is used and, while most Okanagan vineyards have overhead irrigation as well as drip, Covert gets by with just their drip system. “We are essentially dry-farming our alleyways,” he says. “We know that a mix of plantings is better for dry conditions, and a mix also provides a balance between soil bacterial and fungal development.” Winter peas, lentils, triticale, daikon radish and hairy vetch go into the alleyways in the fall and are terminated in early summer before they seed out. June is usually rainy in the Okanagan, so Covert says it’s a good time to reseed with warm season legumes and C4 grasses that will last through the summer.

“I have five different species of lentils that I seed under the vines in the spring, as that is when I get the best take,” Covert says. “That under-vine crop is probably augmenting about half of our nitrogen and the rest is coming from the alleyway plantings.” He also adds some Oriental mustard. “That gets me an early growth, and I think mustard helps with cutworms.”

Depending on the effect he is looking for, Covert says he either mows the vegetation at very low RPMs to break off the stems, or uses a roller crimping implement to crush down the plants. “The rough overstory really helps to release nutrients slowly, while giving some shade to the vine roots from the summer heat,” he explains.

Sharifi says that while the practice of cover cropping is extensive, there is not a lot of research on the actual changes they cause in the vineyard. “We need to study the effects that cover crops have on yield, grape quality – including sugars and phenolics – and their role in disease and pest control,” he says. “I know that Covert Farms has seen a reduction in powdery mildew in some of their blocks. We need to work more to understand the mechanism that is supporting that.” He adds that with climate change, it is also important to understand how cover crops support the vines in the heat of summer and help with cold hardiness in the winter.

“Cover crops check off a lot of boxes for us in terms of soil health and reducing our need for inputs, especially nitrogen,” Covert says. “As we learn more over time, we are finding that multi-species cover crops are a lot more than the sum of their parts.” The vineyard also follows regenerative practices and grazing animals between the vines compliments the cover cropping.

Covert says soil testing gives him an indication of what is going on. “The tests are gratifying, but the real validation is the vine health and vigour through the season,” he says.

One thing he knows for sure is that the experimentation will continue. “A lot of the reading I have been doing lately says to not scrimp on the seeding; the biomass is important. I have different seeding rates in different blocks, and some that were 20 to 30 per cent higher seemed to be perfect,” Covert explains. “Now we just have to do it again.”