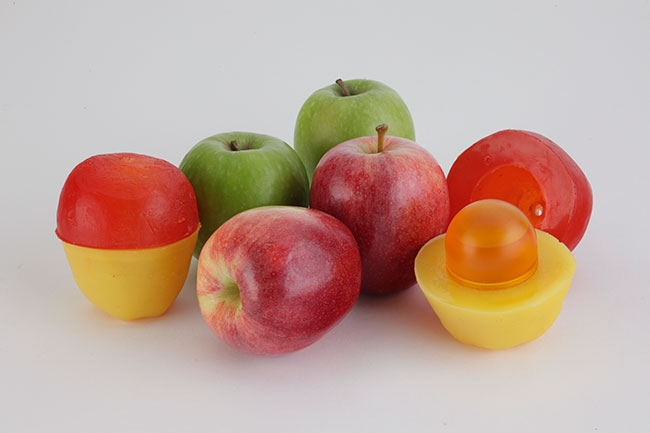 In Canada, the biggest potential for ProduceQC is in the apple business. The company has recently been approached to work with two manufacturers that make apple-handling equipment who are interest in using ProduceQC for equipment calibration. Contributed photo

After fruit and vegetable producers put so much careful attention and effort into planting and tending their crops and orchards, they naturally want to minimize losses due to bruising, nicks and scrapes, temperature issues and so on.

A device that can travel through the harvester and through processing and packaging equipment right through to the retailer would be ideal – one that mimics the real fruit or vegetable in size, shape and weight and provides real-time feedback so that equipment can be adjusted on the spot.

A developer of such devices is Masitek Instruments of Moncton, N.B. Not only are impact and temperature measured with its systems, but velocity, exact location and more. The concept came many years ago from a young P.E.I. potato farmer who wanted a way to minimize bruising in the harvester.

The company he formed was purchased in 2010 by Masitek. Since then, Masitek has sold the CracklessEgg (egg handling), SmartSpud (potato) and ProduceQC (various fruit and vegetable shapes) all around the world. The ag division is called ‘aaggrrii’ and the industrial division, MMAAZZ, offers various beverage and packaging applications – bottle- and can-shaped units that assist food and drink companies in reducing cracks, dents and scuffing. Masitek customers include international players such as McCain Foods, Anheuser-Busch, E. & J. Gallo Winery and Carlsberg Group.

Like all Masiteck units, the ProduceQC has a removable sensor pod that can be inserted into any fruit or vegetable shape required. The acrylic casings or sleeves come in the typical shape, size and weight of apples, tomatoes, onions, peaches and other produce. Recently, the hot markets for ProduceQC and SmartSpud units have been the U.K. and South America, but marketing director Teri Maltais says steady inquiries are rolling in from North American equipment manufacturers as well, with particular interest from Mexico (avocados) and Chile (a wide variety of crops). Chile-based Hortifruit, for example, is using the technology to cut down on damage during grape handling.

While the exact amount of damage that the technology can prevent can be higher than 50 per cent, it obviously differs for each operation.

“In apple and pear production, impact bruising is extremely hard to spot with the naked eye as it happens,” Maltais notes, “with the bruises developing in shipping.” In Canada – based on feedback the company is receiving – the biggest potential for ProduceQC is in the apple business. The company has recently been approached to work with two manufacturers that make apple-handling equipment who are interested in using ProduceQC for equipment calibration.

At its Manitoba operations, J.R. Simplot Company employed the SmartSpud in the fall of 2015 to help a number of its potato growers pinpoint potential impact points apt to cause a bruise.

“We sent out one of our staff members to each contract grower,” explains Jason Coates, Simplot raw procurement manager. “We ran the SmartSpud through harvest equipment, including harvesters, windrowers and onto trucks, as well as into the grading line located in the storage sites, which can include the unload stingers, evenflow tubs, dirt elimination and foreign material removal equipment, conveyors, picking tables and bin-pilers – everything.”

Coates stresses that it’s important to gather as much data as possible.

“With potatoes, the more the device passes through the lines, the better,” he says. “The larger the sample size, the better the information. We had mixed results in 2015 due to the limitation of the data set. I think it’s a good tool to have in our tool chest and we used it in conjunction with sampling, but there is an absolute need for lots of passes.”

He thinks growers could benefit from each purchasing their own SmartSpud.

“It would be very easy for each grower to have the device pay for itself if they’re able to improve their bruise number from one year to the next and improve their incentive returns,” Coates says. “It’s of most value to those who have a bruising problem but can’t identify the source.”

In addition to stressing the need to run the SmartSpud through multiple times, Coates says users should be prepared to have lots of eyes on the unit while it passes through the equipment. With a full flow of potatoes on the line, he notes it can be easy to lose sight of the device, so you want to be aware of when it should be completing its pass.

Cavendish Farms in Dieppe, N.B., purchased a SmartSpud unit four years ago and use it every fall at harvest to calibrate many of its growers’ harvesting equipment, and also to take a close look at three fall receiving lines.

“Something always has to be adjusted,” says Nathan McFadyen, director of operations. “With tablestock potatoes, the handling has to go as smoothly as possible.”

MacFadyen says cost-return on the technology was achieved basically the first time they ran it down a plant line.

“It still works fine after four years but the battery life could be longer,” he adds.

In late 2016, Masitek doubled the battery life of all its technology as part of a complete overhaul, the result of two years of client consultation. Maltais says, overall, the system is now significantly more software-centric and also has Bluetooth tracking.