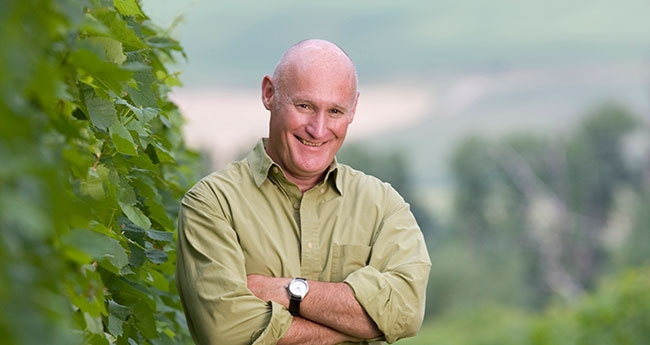 Pete Luckett is a British-Canadian entrepreneur, media personality plus a dynamic speaker. A native of Nottingham, England, Luckett immigrated to Canada in 1979, settling eventually in Nova Scotia.

Luckett became widely known in the Maritimes for his Pete’s Frootique specialty grocery stores. His first store opened in 1981 and two additional stores were opened in different locations in Nova Scotia. He was also a frequent guest on TV where he became known for his catchphrase “Toodlee-doo.”  In October 2015, Luckett announced that the national grocery chain Sobeys would be entering into an agreement to purchase his grocery retail and wholesale business. This could not have come at a more opportune time as Pete was looking to spend more of his time at the vineyards he started in 2010 in Gaspereau Valley, N.S.

To say that Pete is a character is somewhat of an understatement. He has incredible experience and knowledge about retail and loves to share it. One of his key messages is: “You have to be first, best or different. If you can’t make a claim to one of these, you may as well pack it in now.”

He shares several stories of how his daily mission was to create an extraordinary experience for his customers. The spaghetti-eating contest was one such example. It was born because his store was overstocked with spaghetti sauce and they had to find a way to move some. Tables were quickly set up with red, white and green table clothes and pasta was boiled. Customers were invited to partake in the event. It was that simple and done just that quickly. The contest made a great impression and sold lots of sauce, which was the goal.

When he started with his winery, he didn’t have the funds to offer transportation for his customers so he connected with a few other wineries in the area and they created the Magic Winery Bus, a brightly painted double decker London style bus. It leaves from Wolfville three times a day. The bus is set up as a hop-on, hop-off experience. No worries about who will be driving after the tastings.

The best marketing example that Pete shares is the red British phone booth he has in the middle of his vineyard. The phone is fully operational and his customers can make a free call to anywhere in North America. What a concept, because as soon as a customer gets on the phone, they are going to say something like: “You’ll never guess where I am. In the middle of a vineyard at Luckett’s.” It is unique, authentic and nicely highlights his British heritage.