The purpose of this document is to outline the opportunity for Canadian farmers to satisfy the current unmet produce demand of ethnic Canadian consumers. Currently, growers’ costs are increasing while their returns are flat or decreasing, In order to remain profitable they must find new ways of diversification. An increasing volume of fruits and vegetables are being imported into Canada each year, corresponding with the rising ethnic population. Last year (2010), the dollar volume of these imports reached $800 million (Bilal, 2011). Some of the vegetables being imported can be grown in Ontario, which is where the opportunity lies. If Canadian farmers are able to understand what to grow, how to grow it, and then how to market and sell these crops to consumers they will be better positioned to take advantage of this market opportunity. While there are many ethnic groups increasing in size, this report focuses on Chinese and Indian consumers within Canada.

There are two key market drivers

The ethnic population in Canada has been trending upwartds with the foreign born population rising from 3.9 million in 1986 to 6.2 million in 2006, and is projected to continue (Euromonitor International, 2011). In fact, it is projected that by the year 2030 immigration will be the only source of population growth as natural deaths will outnumber natural births (Statistics Canada, 2008). In 2008 immigration reached a 37-year high, accounting for approximately 69% of the population increase (Euormonitor International, 2011).

This significant for Canadian farmers, who will financially benefit increasingly by satisfying the tastes of growing immigrant populations over Canadian born consumers. The chart below depicts the population increase both naturally, and by migration, showing negative natural population commencing in 2030.

Figure 3: Migratory and natural increase of the Canadian population, 1956-2056 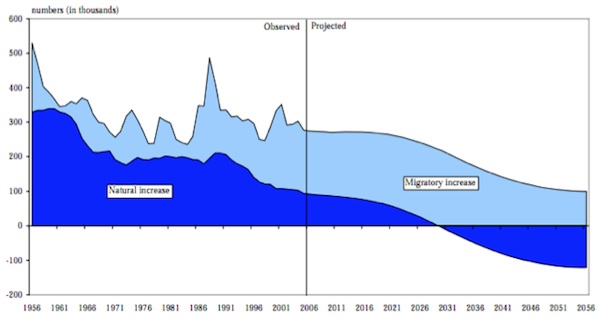 As mentioned previously the report will be focusing on Chinese and Indian (South Asian) consumers. This is in line with immigration trends, as the largest groups of visible minorities in Canada are South Asian, Chinese, Black and Filipinos (Euromonitor International, 2011).

The increased ethnic population has already inspired significant market activity. For example, Loblaw Companies Limited, Canada’s largest food distributor with $30.8 bullion in sales in 2010, and 13 million Canadian shoppers per week (Shelliker, 2011) has recently purchased T&T, a British Columbia based Chinese grocer. Loblaw president Allan Leighton acknowledged the importance on capitalizing on this opportunity when stating, “This for me is a huge opportunity. We have to be the No. 1 player in ethnic. Everything we’re doing is very much focused on this particular opportunity,” (Euromonitor International, 2011). Additionally, grocery industry analyst Perry Caico has estimated the ethnic grocery industry in Canada is worth $4 billion annually, and growing (Euromonitor International, 2011).