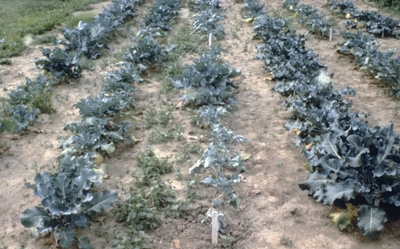 Clubroot symptoms in the field on cabbage. Robert Wick, University of Massachusetts, Bugwood.org

Clubroot is not caused by a fungus but rather by protozoa, which helps explain why the fungicides designed for other soil-borne diseases do not work well for clubroot. The resting spores can lie dormant in the fields for a very long time and awaken when cole crops are planted.

“It tends to thrive when you have a warm, wet climate and acidic soil,” she says.

Once awakened from its dormant phase, the disease soon produces zoospores that swim through water-soaked soils to find and infect the plant’s initial fine root hairs, Dr. McDonald explains. There they rest and produce a fresh flush of new zoospores. This fresh flush later attacks the primary root of the main plant where they nest and multiply again.

The protozoa cut off and divert the root energy and nutrients to themselves, leaving the plant with a clubroot. This causes stunting or death for infected plants.

For many years, crop advisors have recommended avoiding infested, wet fields and doing a long crop rotation every five to seven years. Another tactic is to increase the soil pH to 7.2 or above. These measures work for many growers but not all, she says.

In a controlled laboratory environment, University of Guelph graduate student Hema Kasinathan has run trials with canola, an immediate brassica relative of rapeseed, through the paces of temperature, pH and soil moisture.

In this controlled environment, research was conducted on a soil pH range of 5 to 8, with air temperatures of 10 to 30 C. It was soon discovered that plants at 10 and 30 C did not fare well and were dropped from the study. The remaining canola trials were assessed six weeks after inoculation when there was plenty of disease available.

As in previous studies, the researchers found that 25 C was optimal for clubroot development, and even at the high pH level of 8, the plants still suffered a 40 to 50 per cent infection rate. The canola plants grown in the same pH soil, but at 20 C, received a 20 to 30 per cent incidence of clubroot.

“These results demonstrate that while raising the pH helps, it will never get you zero infections, if other conditions favour disease development,” she says.

Overall, researchers found that raising the pH, with cool air temperatures of 10 to 15 C, helped lessen the incidence of injury. Cool soils, however, were ideal in delaying the onset of clubroot, so if possible plant the crop early, says Dr. McDonald.

Of the clubroot fungicide trials, Dr. McDonald says the bio-fungicides worked best in 2009 but not so well in 2010.

“The results have been variableand nothing is really consistent,” she says. “That might be because we needed higher rates or more water.”

As for varieties resistant to clubroot, Guelph researchers have been appraising four resistant cabbage cultivars from Syngenta. Other resistant varieties available include bok choy, Brussels sprouts and broccoli.

The standard varieties are highly susceptible to clubroot but resistant strains are on the market and they perform well. Tolerance in 2011 fell for the resistant broccoli hybrids planted in the same field two years in a row. It displayed some clubroot but it still yielded four times more than the susceptible variety in the check plot.

The resistance bred into the new plant varieties is most impressive but will it stand the test of time? “In Europe, they have a resistant line of canola but over the years they have seen this broken down,” says Dr. McDonald.

Each year, a number of resistant cultivars developed from seed companies become available.

“I know the seed prices are expensive,” she says. “If you don’t have a clubroot problem and traditionally have little disease pressure, then there is no advantage. But if you do, the new resistant varieties are well worth the cost.”

The bottom line is to maintain good management practices and use fungicides wisely and effectively regardless of what you plant. As well, go back to the original recommendations of planting in well-drained fields, and increase your pH to 7.2 or higher as it will reduce your disease pressure. For brassicas such as bok choy, try to plant early in cool soil. For all crops, always use a long-term rotation, even with the resistant varieties that should be rotated wisely.

In the future, Dr. McDonald says researchers are looking at the resistant cultivars as well as the mechanisms of resistance to determine what genes are involved and which ones can be identified. The results from the 2011 research is available on the OMAFRA website.