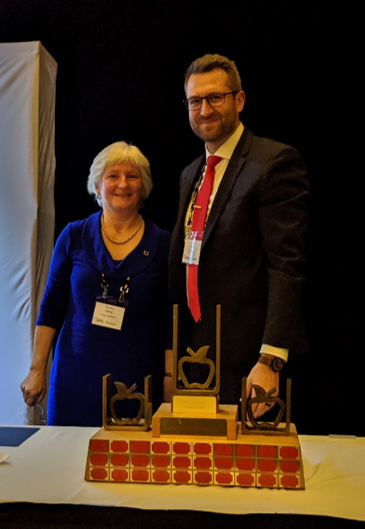 The Golden Apple Award was presented posthumously to Don Peters on February 18 at the Ontario Fruit and Vegetable Growers’ Association annual meeting. Photo courtesy of The Grower.

Peters, who had served as vice president of N.M. Bartlett Inc. since 1987, died in December 2019 after battling cancer.

“Don was very well respected throughout our sector and dedicated his career to working with growers, designing solutions to help improve apple growing in Ontario,” said Cathy McKay, chair of the Ontario Apple Growers, in a statement. “He had an uncanny ability to problem-solve and think outside the box, and left his mark on many apple technologies and facilities across our province.”

Peters designed and built a wide range of innovations, from the first fully automated apple packing line with electronic grading and defect sorting in 1990 to an electrically-driven, remote control bin moving system in 2016.

He also designed apple packhouse layouts for many of Ontario’s leading apple producers, and travelled widely to find the best equipment and practices for his customers.

Peters was passionate about crop protection and pest control, working together with a professor from Western University to develop the first electrostatic sprayer. This technology is still offered on sprayers around the world today to reduce off-target pesticide application.

He also served as chair of the Ontario Provincial Council of CropLife in 1989, where he tackled issues like triple rinse containers, and was involved nationally on CropLife’s Marketing-Code of Ethics Committee in the 1990s.

Peters grew up on a small fruit farm in Jordan Station and graduated from Brock University in 1972 with a bachelor of science degree. He first joined Bartlett’s in 1973, and became a territory sales representative in the Leamington area the following year where he worked closely with local growers on care and use of crop protection products and orchard equipment.

“Don loved his work and working with people and dedicated his life to the betterment of agriculture and the Ontario apple industry,” McKay continued.

The Arysta Golden Apple Award is presented annually to a recipient who has made outstanding contributions to the Ontario apple industry. The Ontario Apple Growers represents the province’s commercial apple farmers.