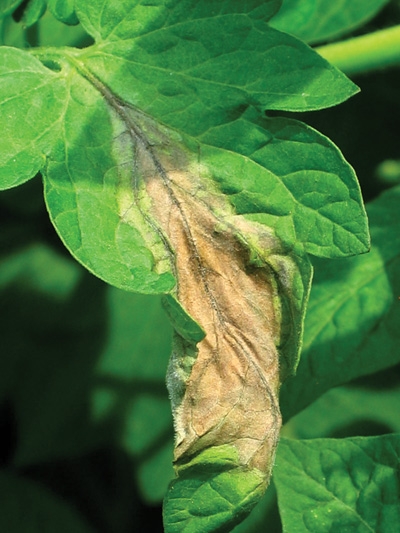 Late blight is an important topic that scares us all, and its devastation of tomato crops can be widespread, says Dr. Tom Zitter, a plant pathologist with Cornell University based in Ithaca, N.Y.

The epidemic that occurred in U.S. tomato crops during 2009 was unique because it began so early in the season and occurred so evenly over such a large geographical area, something that never happened before. Another feature of the epidemic was that a new genotype of the pathogen was responsible – US-22 – and was capable of infecting both tomatoes and potatoes. To be sure, the principal genotype affecting potato at that time – US-8 – was also present in New York State, but affected only limited potato acreage. Genotype US-8 is limited to potato and most likely originated from infected tubers used for seed for the 2009 crop.

So why is late blight important? asks Dr. Zitter. When he and Dr. Bill Fry began their 2009 study, the disease had likely got its start in Florida in May 2008, then started working its way north.

Dr. Zitter’s first encounter with this strain was on June 24, 2009, when a colleague brought him some samples to identify the pathogen on the leaves. The plants came from the garden section of a local big-box store.

That same afternoon, Dr. Zitter visited the four big-box stores in Ithaca and found their tomato plants were infected with late blight, but no infection was found at five local garden centres that had grown their own plants or had received them from other suppliers. He advised some customers against buying them at the big-box stores and also spoke with the store managers, who said they got the plants on consignment. They said they would speak to the supplier and ensure the plants were removed by Saturday.

Dr. Zitter returned to the same stores the next Saturday and the plants at that provider were gone. He felt reassured, but only briefly. When the other stores around the state realized they had a problem on their hands, some centres put their plants on sale for half price. “By that time we already knew we had an epidemic; the genie was out of the bottle. By the middle of August of that same year the disease spread was statewide,” he says.

Potatoes usually get late blight first but in 2009 it was the tomatoes, and the primary source for spreading the disease was the unknowing home gardener. The onset was very early in the season and the environmental conditions were highly favourable for late blight from New York up into Maine.

Commercial growers had to go on a crash course of spraying every four to five days, as did organic growers, who were actually able to control it by removing infected plants and using regular sprays of copper, he says. Homeowners could not respond in such a manner and lost all of their plantings to late blight.

Of the late-blight strains that existed in 2009, Dr. Zitter says there was homogeneity that existed among the isolates since they represented the same clonal lineage. “You could almost put a bar code on the genotype because they were identical, they all behaved the same way, which is critical for identification.”

He adds that strains today have a much wider host range, with different genotypes, asexual reproduction and clonal lineages. These lineages may be more aggressive toward both tomato and potato. “With the new techniques that are available today, we can test a sample and within 24 to 48 hours we can tell what genotype it is,” he says.

In terms of the host range for late blight, it can infect plants such as petunia, hairy nightshade, tobacco and pepino (all members of the Solanaceae plant family) to name a few. This is a very wide host range and Dr. Zitter says that when he does greenhouse tours he always checks petunias in addition to tomatoes to be sure that late blight is not present.

“This is not the same disease that your father or even your grandfather knew because back then they were dealing with only US-1 (mating type A1) and it was only a concern for commercial potato growers,” he says.

During the early part of 2000, US-7 and US-8 were the main concern in potato and were of the A2 mating type. For tomato growers the lineages of concern were US-11 and -17 (both A1 mating type), with a limited preference for potato. All of these lineages showed resistance to the fungicide Ridomil, which had been the silver bullet available in the early 1990s when US-1 prevailed.

“Also, with many new chemistries, there are a plethora of new products available to help in emergency situations. Just make sure you rotate your chemicals,” he says.

Unfortunately, says Dr. Zitter, conditions on the battlefield have changed since the arrival of US-22, the strain that has infected both tomato and potato crops in the eastern United States and southern Canada from 2009 to 2011. “The isolate does have some staying power and can be expected this year as well,” he adds.

“When it was first identified, US-22 was found to be sensitive to Ridomil, and if we had known the genotype then, we could have advised growers to use one spray of Ridomil, which would likely have stopped it dead in its tracks. That’s why it’s so critical to know what genotype is at work in your field or in your greenhouse,” he says.

For potato growers, applying Ridomil alone in-furrow is not labelled for this use because it is difficult to get even coverage on the seed piece, but if mancozeb is applied to the seed tubers it will reduce the risk of the disease spreading from tuber to tuber prior to planting. “This is important not only for them but for tomato growers as well given the number of genotypes that move from one crop to the other,” he says.

Also new to the field since 2010 is US-23, which infects both potato and tomato rather aggressively, and is expected in 2012. It is sensitive to Ridomil. In 2011, it was first reported in Connecticut, then on Long Island, after a transplant grower was told he had late blight and reacted by destroying all of the plants that displayed the symptoms but keeping the ones he thought were clean. Shortly thereafter the inoculum on these plants reproduced and eventually spread to a number of New England states, and as far south as Pennsylvania.

“With US-22, US-23 and US-24, the big scary point we don’t know yet is about sexual reproduction because when you get the two mating types in the same field you certainly have the potential of their sexual mating and recombining into a different assortment. Subsequent oospore production means they have the potential to overwinter, which growers in Ontario might face on an annual basis. In New York, we used to see late blight about every five years, but that has changed in the last few years,” he says.

As to the future, Dr. Zitter says there are many unknowns. The organism is changing and the bottom line is that the plant breeders really need to focus on developing plants resistant to late blight.

For tomato growers and homeowners looking through seed catalogues, they want tomato cultivars that have both Ph2 and Ph3 genes for maximum late-blight resistance. “If it’s just Ph2 you can expect that late blight will develop,” he says. Some resistant varieties developed with both genes have performed well, including Mountain Merit and Defiant PhR for large reds, and Mountain Magic F1 for large cherry (a Saladette or Compari type).

Researchers at Cornell, other universities and some commercial breeders are working on new cultivars that are resistant or offer good tolerance to early blight, late blight as well as Septoria leaf spot. New crosses are being developed that confer high levels of genetic resistance for early blight and Septoria leaf spot that will allow for disease control with minimal or no fungicide applications, especially if a two-year rotation out of tomato is practised. He hopes new hybrids will be on the market in the next two years.

A national website, www.usablight.org/, is regularly updated by national contributors to pinpoint where late blight is currently reported, and growers are encouraged to log in. The site will even send messages to cellphones to tell growers when late blight is in their area. “It is timely information that you can use, and by the time it is posted, you will actually know what genotype it is so you can determine what kind of corrective action to take,” he says.

For updated information on the use of TOMcast ™ for determining the need for sprays to control early blight, Septoria leaf spot and anthracnose, visit the site at www.weatherinnovations.com/tomcast.cfm.