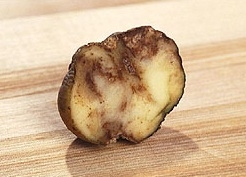 May 13, 2014, Edmonton, Alta – Over the last few years, there has been a great deal of concern in Alberta surrounding late blight, which is a serious disease called that affects mainly potatoes and tomatoes. This year appears to be no different.

“This disease is caused by a fungal pathogen called Phytophthora infestans,” says Robert Spencer, commercial horticulture specialist, Alberta Ag-Info Centre, Stettler. “The favourable conditions for disease development, combined with the presence of the pathogen, have resulted in multiple outbreaks of late blight in commercial, market garden and urban potato and tomato crops throughout parts of Alberta. For 2014, this disease continues to be a risk for all solanaceous crops (potato/tomato family) grown in Alberta.”

Late blight is found in most potato and vegetable-growing areas of Canada, although historically it does not occur every year on the Prairies. Late blight is most damaging on tomatoes and potatoes, but may also affect eggplants, peppers, petunias and some related solanaceous weeds, such as nightshade and wild tomato. Late blight is an aggressive disease that, if left unchecked, can cause significant and rapid crop losses in fields, gardens, greenhouses and in controlled environment storages, e.g. potato bins.

When the pathogen is present and weather conditions are favourable for disease development, commercial potato and market garden crops are at risk from late blight, as are all other plantings of potatoes and tomatoes, including greenhouse tomato operations. The risk of introduction comes from either infected transplant material (tomatoes or other host crops) or infected seed potato stock (either imported or carried over). During the season, if spore loads build up, there is a risk of introduction of the pathogen via wind-blown/storm carried transfer.

“Initial symptoms of late blight are typically noted on older leaves, appearing as dark, water-soaked areas (lesions), sometimes with yellow edges, that move in from leaf tips/margins, becoming brown and brittle within a couple days,” says Spencer. “Late blight lesions are not contained by the leaf veins. Lesions may also develop on plant stems and on potato tubers and tomato fruit. Late blight develops most quickly in warm, wet/humid conditions and can spread very rapidly through plantings. Plants may be rapidly defoliated, die and yields can be significantly reduced.”

Potato tubers may be infected by spores produced on the foliage, which are subsequently washed into the soil. Infected tubers may have irregular, sunken lesions that are often first found around the eyes. The pathogen can penetrate into skin of the fruit or tubers, causing rot and discolouration of the internal tissues. The rot often has a reddish-brown colour. Late blight can spread from diseased to healthy fruit and tubers in stored tomatoes, in potato piles in storage and on seed potato pieces.

On the Prairies, late blight does not form an overwintering spore. Rather, the pathogen overwinters on living tissues, carrying forward from one season to another on infected seed potatoes, cull piles, volunteer potatoes or living host plants (e.g. tomato transplants).

In-season, it is spread by spores (sporangia) produced on infected tissues (infected transplants, volunteers, weeds and diseased crop debris). Spores spread within the fields by rain or water splash. Sporangia may also move short distances in soil water and spores may move between fields on equipment. Spores can move considerable distances on the wind.

“In early spring and into summer, the priority is for regular scouting and monitoring of emerging plants, and new plant material,” says Spencer. “Early detection is critical for minimizing the impact of the disease and preventing further spread and significant outbreaks.”

Late blight is not a disease that occurs every year in Alberta. “There are other diseases that can resemble it, but are less serious in nature,” says Spencer. “By carefully managing any infected plant debris, people can help to minimize late blight outbreaks, and prevent it from overwintering and avoid a potential repeat infection of susceptible crops and weeds in future years. Late blight is a community disease, and will require the concerted efforts of everyone to get rid of it.”

Alberta Agriculture and Rural Development has prepared a number of print and electronic information resources to assist all levels of the horticulture industry as well as the public to recognize potentially infected material and understand the appropriate management steps to take.