The high cost of minimum wage is forcing Canadian horticultural producers to look at ways to automate field tasks. 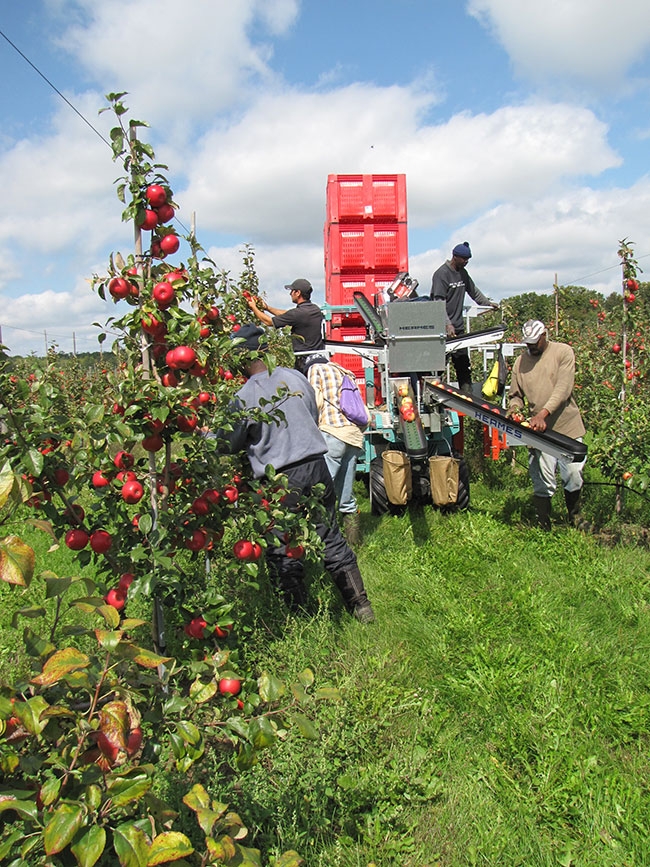 With the increases in minimum wage, labour costs have jumped significantly for Ontario horticulture farmers in recent years. While this has been tough on many producers, apple growers have been feeling the bight keenly considering there is more labour required to keep an orchard running.

Some have approached the challenge head-on, aggressively reducing the need for labour through planning, management and intensive production. But one Ontario grower has thrown a lot of effort into doing more with less. For his hard work and experimentation, Werner Zurbuchen, the owner of Zurbuchen Farm in Norfolk County, was recognized with a 2014 Premier’s Awards for Agrifood Innovation Excellence.

“We still have to work long hours at times,” he admits. “But we’re doing significantly more with less.”

In 1993, Zurbuchen and his family decided to sell their broiler operation and orchard/vineyard in Switzerland and immigrate to Canada. They purchased a broiler chicken farm in the Waterford area, which featured 185 workable acres of loam soil that has since been systematically drained. During his first autumn on the new farm, Zurbuchen got going right away with apple growing. He planted 100 apple trees and also grafted other varieties to test how they would perform in the Ontario climate. Once he saw them doing well, he budded 17,000 trees on rootstock in his own nursery, and then planted them on 17 acres. From 2009 to 2012, Zurbuchen and his family expanded the orchard to 50 acres. The farm now has 48 acres of apples (with 10 being mature, high-density cultivation), two acres of pears, and the rest supporting a rotation of corn, soybeans and wheat.

“The apple crop estimate for 2015, if things go well, is about 1,000 bins,” Zurbuchen says. “In terms of what we grow, over the past two years, we have cut out our Spy, Mutsu and Macintosh cultivars because these varieties aren’t favoured today, and are now growing a majority of newer varieties. By today’s standards, we plant a medium-density orchard of 1,000 trees per acre and train them as tall spindle.”

Tall spindle tree care, once the trees reach their maturity, is time-consuming in terms of taking care of the upper section beyond normal arm reach from the ground.

“If you use a ladder for this – and for thinning, tying, trellis installation and harvesting – it’s quite expensive because of the labour involved,” Zurbuchen says. “In addition, ladders and heavy bags of apples can be dangerous.”

Zurbuchen had already designed the high-density part of the orchard for mechanization, so when labour costs started increasing around 2010, he went the automation route and bought machinery. (He also welcomed his son-in-law Joseph Taylor to the farm as mechanic and, after some training, as seasonal field manager.) Zurbuchen’s first purchases were an imported European mechanical thinner, a Frumaco platform/harvest-aid and a bin trailer. In 2011, he bought a Feucht windfall pick-up machine, and in 2013, a Fama mechanical pruner.

The Frumaco platform has performed as expected, boosting operational efficiency by a significant amount.

“It cuts both pruning and harvest time by 35 per cent, and thinning and trellis/tying worktime each by 50 per cent,” Zurbuchen says. “I can’t provide an accurate figure for the mechanical pruner right now as we’re still experimenting with it, but together with the platform, we are hoping for at least a total 50 per cent reduction in pruning time. We have used it a lot in a leased orchard with standard planting density and with varieties prone to dropping, and we can pick up at least 50 bins in seven hours with two men running it.”

While worker safety has also been improved with the machinery additions, Zurbuchen says that proper instruction for each worker is still critical in order to keep the risk of accidents to a minimum.

Because he thought there might be other growers besides himself interested in mechanizing, Zurbuchen also started an orchard equipment business called Tazu Technology. The company imports and distributes mechanical pruners, platform picking machines and other orchard equipment.

“We stand by what we sell because we have firsthand experience with it,” he says.

There are six Frumaco harvesters currently being used in Quebec and Ontario orchards, and Zurbuchen believes that number will increase.

“There’s been a lot of interest from growers and we’re confident that in the coming years, more farmers will move forward in mechanising their operations,” he says. “We are currently in the process of purchasing a Lipco twin row tunnel sprayer which will be able to spray two rows at once, recycling lost chemicals while not being effected by the prevailing winds we seem to have quite often.”

Zurbuchen is also thinking seriously about buying a Frost Buster – a propane air blast heater that will help combat night frost in the spring and also assist with pollination.

The current challenges for this operation include planting new varieties that will be strong market leaders for many years to come. Replacing some of the less desirable older varieties with newer ones will also help to fill out the orchard’s harvesting window. Zurbuchen also wants to continue honing his integrated pest management (IPM) program, as well as his strategies for finding committed local labour.

“It’s also a challenge these days to deal with more and more paperwork, not only related to employees but also to comply with regulations and burdensome red tape,” he says.

Of winning the award, Zurbuchen says he’s happy that it’s brought some positive attention to the apple industry.

“It is our hope that the government understands that for Ontario farmers to be successful in a very competitive market is a very real challenge,” he says. “We are thankful to the premier and her staff who put the work into recognizing the hardworking people in the agriculture industry.”