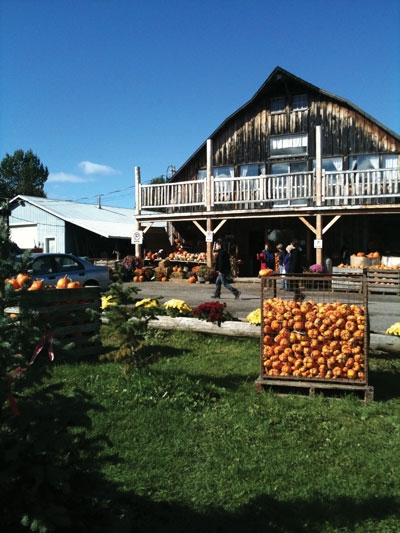 Over the past year, there’s been a surge in the number of visitors to Quinn Farm (la ferme Quinn), Montrealers’ treasured rural oasis established in 1982 on nearby Ile Perrot, Que.

Quinn Farm has long served as a retreat for city dwellers who want to escape the daily grind and express their inner farmer, while scrunching hay underfoot and inhaling the scent of ripening fruit. Family members young and old can pick their own apples, pumpkins and strawberries. But a more primal impulse drawing people to the farm is the Eat Local movement, according to owner Phil Quinn, and its offshoots have led to a boon in business for the family. The farm broke records on Thanksgiving weekend in 2011 when it received an unprecedented 10,026 visitors, and the unusual wave of premature spring weather in mid-March this year resulted in more than 200 people coming out to just wander around the grounds. Quinn says there’s no clear explanation to account for the large crowd in March. His farm is known for its you-pick business, and there was obviously no fruit to be picked in early spring.

“There were some baked goods in the bakery and meat in the freezer for purchase, and the hens were laying eggs like crazy,” he recalls.

But none were the draw that accounted for crowds so early in the season. It seems people just wanted to get down to the farm.

“People want to put a face on their food,” says Quinn, who purchased the farm from his parents and now operates it with his wife, Stephanie. “They want to make a connection with the people producing it and the farm it’s produced on. You don’t get that connection in grocery stores or at Walmart. There’s a general lack of human contact these days, with people sitting in cubicles at work all day.”

He describes Europe’s longstanding tradition of heading out to the farm to select the meat and produce for the family’s kitchen.

“People will come to a farm to choose the lamb they want for supper and come back the next week to pick it up, ready to cook. There’s a certain comfort in seeing where your food comes from,” says Quinn.

The Eat Local movement squares well with the farm’s history; dealing directly with the consumer has been the backbone of Quinn Farm since its inception. Quinn credits this approach for their success.

Quinn’s father Elwood put a premium on developing this direct marketing approach from the start. In the pre-Internet 1980s, he established good relations with the community by making personal contact with the media. One day, he thrilled popular and beloved morning man radio host George Balcan when he brought a 300-pound pumpkin to the local radio station, CJAD. Balcan became a loyal friend of the farm from then on. Elwood Quinn also marketed the you-pick feature of the business to daycares and schools, which continue to bring a steady flow of visitors during harvest season.

Quinn has carried on his father’s tradition of reaching out to the community. Like other successful businesses, such as Ben and Jerry’s, whose marketing model includes showing gratitude for and giving back to the community they serve, Quinn Farm donates several pumpkins and Christmas trees, and dozens of cobs of corn to local food banks. In 2011, they launched an appeal on Facebook announcing that anyone coming with a non-perishable food item for food banks would be given free admission to the farm. In addition, visitors were offered the opportunity to fill an extra box with apples for the hungry after picking their own.

Quinn also tries to create a family feeling amongst employees by encouraging a sense of belonging and ownership. Several family passes are given to employees, which they can then distribute to friends, family and visitors they consider deserving, generating a kind of extended Quinn Farm family.

“We try to be genuine and warm, and create a family atmosphere,” says Quinn. “That includes treating the staff well.”

Staffing hasn’t always been without its challenges. In 2011, the Quinns began the strawberry harvest season with 72 employees, and finished with only five. Many of the employees were young students and, although the pay was very good, they had a hard time sticking it out until the end of the season. This year the Quinns employed two Guatemalan employees under the foreign workers program.

The family continues to innovate in other ways, providing new attractions for families. For this year’s harvest season, they created a straw castle and straw jumping site, and duck races where kids will get to urge ducks to the finish line by pumping water from old kitchen pumps, propelling them along.

Quinn grew up on the farm and learned to drive a tractor at the age of four when his father couldn’t afford to hire outside help. He was initially ill at ease with limiting his own career path to taking over his dad’s enterprise, and decided to strike out on his own. He studied farm management technology at McGill for two semesters but found the farming industry was way ahead of what educators were teaching in the university. He worked in agricultural construction for a while but, as he says with a chuckle, “It turns out I couldn’t leave this place.”

Fortunately for the Quinns, Montrealers appear to feel the same way about the farm – they just can’t leave the place. They keep coming back, and in numbers that are growing all the time.