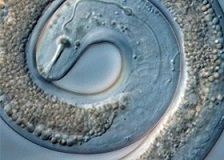 Nematodes are pests that you need to keep an eye on in order to ensure the productivity of market garden crops. Several species are considered parasites of fruits and vegetables. Various types of nematicides have been used in the past to eliminate and/or control the spread of nematodes. Since the 1970s, these nematicides have been phased out of commercial use. The last fumigant nematicide was withdrawn over the last five years. Over time, it became apparent that they were not safe for users or for the environment.

Consequently, it became important to develop alternative nematode control methods for producers of market garden crops. The researchers at Agriculture and Agri-Food Canada, Guy Bélair (retired) and Benjamin Mimee (a nematologist currently working in this field), are dedicated to the development of nematode control methods, for example through integrated pest management measures. This approach relies on a combination of cultural methods used in conjunction to reduce the density of nematodes in fields in order to minimize crop damage.

The research experiments conducted by Mr. Bélair provided conclusive results concerning the most effective integrated pest management methods, in particular against endoparasitic nematodes. Because this type of nematode is an internal plant parasite, it prevents the plant from absorbing water and nutrients from the soil, which are necessary for optimal plant growth. This class of nematodes causes the greatest economic damage. There are three species of endoparasitic nematodes: the root-knot nematode, the lesion nematode, and the stem and bulb nematode.

According to researcher Bélair, the following is a summary of the most important facts to remember in integrated pest management.

Root-knot nematode
Learn more about it: Eggs are laid outside the root in a gelatinous mass. The second-stage larva (or infectious larva) is the only stage found in the soil. All the other stages are inside the root. Abundant rootlets (hairy roots) and whitish nodules on the rootlets. In carrot, significant deformation of the primary root. Complete development cycle: four to six weeks.

Best practice: To effectively and significantly reduce root-knot nematode populations, practise crop rotation with a grain at least every three to four years, since this type of nematode does not attack any grains. If the infestation is too heavy, two years of grains may be necessary. One year of onion followed by one year of grain has proven to be very effective in controlling nematode populations and increasing carrot yields by more than 50 per cent the following year.

Lesion nematode
Learn more about it: All the stages of development except the egg can infect a root and are found in the soil. The entire development cycle takes place inside the root. By moving within the root, the nematode causes injuries or lesions, allowing certain pathogenic fungi to enter the plants. Complete development cycle: Four to six weeks.

Best practice: A rotation with forage pearl millet reduces populations to below the damage threshold for several crops (potato, strawberry, raspberry, corn, apple tree, soybean). Sow millet in early June since it prefers a hot climate. If sown too early in the spring in wet, cool soil, it will not germinate well and will be quickly invaded and smothered by the growth of annual grasses.

Based on our research between 2000 and 2006, we can conclude that, for potato, this type of rotation increased yields by 15 per cent to 35 per cent, depending on the density of the initial lesion nematode population.

Stem and bulb nematode
Learn more about it: Unlike the other nematodes, this nematode does not affect the roots, but only the above-ground part of the plants (the stems). This endoparasitic nematode causes very significant damage in garlic crops. Through cryptobiosis (dehydration and dormancy), this nematode can survive in a field for four to five years without the presence of host plants. It is spread through contaminated plants and seeds.

Our greenhouse trials demonstrated that this nematode reproduces well on garlic and onion, poorly on potato, and not at all on corn, soybean, barley, alfalfa, mustard, carrot and lettuce.

Plant in nematode-free soil. A rotation of four to five years without host plants is a good method for getting rid of stem and bulb nematodes.