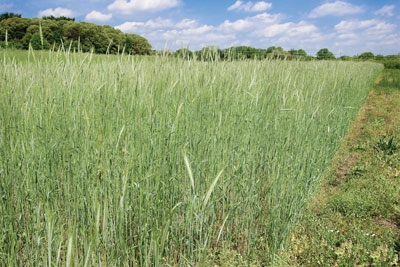 However, information on cover crop approaches, applications and benefits pertinent to vegetable crops grown in Canada is not readily available. Therefore, a literature review was conducted to determine the feasibility of using cover crops in field vegetable production systems as part of integrated weed management practices meant to minimize the use of herbicides.

Methodology
Published scientific literature and extension articles on cover crop research for key vegetable crops (potato, sweet corn, field tomato, carrot, onion, Brassica crops, peas, cucurbit crops, green and wax beans, and lettuce) in North America and other regions with similar climates in Europe were reviewed. From this review, approaches that can be adopted for weed management in field vegetable production in Canada were identified based on:

Weed management is an important crop protection component in vegetable production. Non-chemical weed control options are needed to help growers
reduce reliance on herbicides and risk of resistance development. Cover crops have been identified as an approach to sustainable weed management.

Cover crops can lessen herbicide use by:

Switching to POST usually involves herbicides that are less persistent in the environment than PRE. Savings in herbicide cost compensate the higher cover crop cost in some studies but not others. There is wide variability between studies and systems in degree of weed control, crop response and costs. Some systems add value beyond weed control, thereby increasing profitability.

Species of weeds controlled varies widely between and within systems. In general, annuals, and not biennials or perennials, are suppressed by cover crops. Allelopathy is a promising mechanism of control, and is likely to work best where weeds are small seeded, and the crop is not. Rye residues are allelopathic with better efficacy against annual dicots than grasses, and have consistently controlled lambsquarters, nightshade, plantain, goose grass and barnyard grass. Brassica residues are also allelopathic, depending on stage, and notably provide control of crabgrass and pigweed. Smother crops such as sorghum or sudangrass can provide control of perennials such as quackgrass during growth, but at the expense of about half of the growing season.

Conclusions
Growers are encouraged to trial rye/vetch mixtures prior to tomato or rye before cucurbits with minimum or no-till planting, or cereal rye overseeded into late harvested crops, or sorghum before late-planted or after early-harvested vegetable crops. Adoption of these recommended approaches will likely lead to reduced need for herbicides, hence reduced risk from pesticides, better resistance risk management and other economical and environmental benefits.
If using any of these approaches, note:

Herbicide requirement will be reduced according to the amount of mulch left by the cover crop, the existing weed pressure and the weather – spray as needed.

Dr. Bonnie Ball Coelho is a research scientist with the soil and environmental sciences division of Agriculture and Agri-Food Canada. She is based in London, Ont