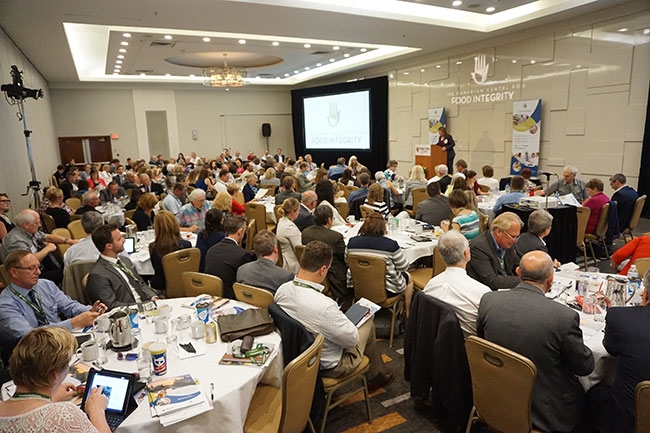 The Canadian Centre for Food Integrity was launched June 2016 at the first Public Trust in Agriculture Summit, held in Ottawa. Photo courtesy of Farm and Food Care Canada

If you ask a group of random Canadians about whether they trust farmers and Canada’s food system on the whole, you’ll likely hear a variety of responses.

Putting livestock farming issues such as animal welfare, hormones and antibiotic-resistant bacteria aside, there’s a large number of thorny public trust issues that relate directly to fruit and vegetable production, from E. coli on lettuce and the use of pesticides, to the bee population drop, labelling issues and so-called Frankenfoods.

Keith Kuhl, president of the Canadian Horticultural Council, believes “farmers want to be transparent and are committed to continue to find ways to allow the public to influence how their food is produced. We need to better understand what information consumers want.”

One of the big milestones in global public trust relating to fruit and vegetables was perhaps the commercialization of the genetically-modified Flavr Savr tomato in 1994. It was the first genetically-engineered crop product to be marketed, designed with genes allowing it to stay firmer and fresher for longer. Because not enough consumers had faith in its safety, by 1997 it was no longer for sale. Many see the whole Flavr Savr story as one that illustrates the critical importance. of public trust in agricultural success. Only time will tell how differently things will be when later this year, Okanagan Specialty Fruits in Summerland, B.C., markets its GMO non-browning Arctic Apple.

Putting genetics and crop production issues aside, the trust of consumers in the food system is also tested on an ongoing basis through a literal onslaught of countless media stories and weighty books about food, which – sometimes published within the same year – contain conflicting claims about the health benefits, non-benefits and even detriments of food items like eggs, whole grains, fats and even certain vegetables and fruits. Google the phrase “vegetable health risks” and you’ll get 8,280,000 results. “Dr. Oz Explains How Some Fruit Could Be Bad for You” is the title of a Youtube video with more than 70 000 views.

To gauge the degree of public trust in the Canadian food system, the Canadian Centre for Food Integrity (CCFI) did a large survey in 2016. The CCFI is a division of Farm & Food Care Canada, a charity with a vision to earn public trust in food and farming, and an affiliate of the well-established U.S.-based Center for Food Integrity. Both organizations are made up of members representing the diversity of the entire food system. In Canada, that includes Dow AgroSciences, Monsanto and John Deere Canada (see full list of founding members in sidebar).

The CCFI was launched in June 2016 at the first Public Trust in Agriculture Summit, held in Ottawa. Speakers and participants came from all aspects of food production, from seed companies, chefs and farmers to academics, farming associations and large companies. The summit was intended to “encourage continuous collaborative discussions amongst farm and food system leaders, while developing concrete actions for earning public trust.”

A panel discussion involving five typical urban Canadians illustrated all too well how much mistrust is held towards the Canadian agri-food system, and the low level of knowledge about farming among the panelists was – for many of the audience members who live and breathe food production on a daily basis – shocking. But to be fair, many attendees also recognized how difficult it is for anyone outside of agriculture, the health care system, forestry or any other complex sector of our economy to make time to learn the basics, let along keep up with the many changes in practices and policy that are standard today.

But what’s more serious – and especially relevant to farmers – is that because trust in the food system has been lost, consumers (as well as retailers and restaurant chains) are now in a position where they are all but dictating what happens in barns and fields. The conversion to cage-free egg production is one example, and the final decision of McDonald’s restaurant chain in late 2014 not to serve GMO potatoes is another.

Once trust has been lost in any arena, it’s hard to build it back up again. But the summit highlighted the fact that for farmers, it’s no longer only a quest to regain public trust in agriculture, but to keep their social licence – their very ability to dictate their own farming practices and have the general public believe them competent to look after animals, crops, the land – a “freedom to operate” if you will. On that note, here is another CCFI survey result to ponder: only 29 per cent of Canadians believe Canadian farmers are good stewards of the environment.

“Control has already been lost,” noted summit presenter Charlie Arnot, CEO of the Center for Food Integrity in the U.S.

He and other presenters suggested that perhaps building public trust in the food system starts with accepting that the social licence of farmers may henceforth always be shared to some extent with the consumer. However, several speakers pointed out this fact is not yet accepted by many in agriculture. On the whole, the summit presented a new “normal” that farmers should strive to get used to as quickly as they can.

A CCFI statement published in a summit booklet summarizes the severity of the situation in business terms: “We see consumer alienation from agriculture and the food system expressed through concerns about nutrition, food safety, affordability, environmental sustainability, animal well-being and other issues. Some argue that maintaining public trust is a worthy goal, but not relevant to success in business. This outdated notion fails to recognize the financial benefit of maintaining trust of stakeholders who can determine the level of social license or social control an organization enjoys…Once lost, either through a single event or a series of events that reduce or eliminate stakeholder trust, social license is replaced with social control. Social control is regulation, legislation, litigation or market demands designed to compel the organization to perform to the expectations of its stakeholders. Operating with a social license means more flexibility and lower cost. Operating with a high degree of social control increases costs, reduces operational flexibility and increases bureaucratic compliance.”

As it was stressed over and over again at the summit, re-gaining public trust in agriculture and food must be everyone’s responsibility. The CCFI, Farm & Food Care, private companies, food and farming associations and individuals were all encouraged to bridge the gap that currently exists between consumers and farms. For its part, the CCFI will continue to research consumer opinions, questions and concerns. In addition, the CCFI will develop and highlight best practices, models and messages that build trust, and hold future meetings and summits such as the 2017 version in Calgary in September. CCFI CEO Crystal Mackay says its ongoing work is so important because “without public trust and support, we don’t have permission to grow and innovate.”

The Canadian Centre for Food Integrity was launched June 2016 at the first Public Trust in Agriculture Summit, held in Ottawa.

For its part, the Canadian Horticultural Council continues to develop the CanadaGAP program since initiating it 16 years ago, a food safety program verified by the Canadian Food Inspection Agency that’s accredited globally.

“Many of the producers were so keen to demonstrate good agricultural practices that they started implementing CanadaGAP as it was being designed,” Kuhl says. “And the number of farms participating in the program continues to increase every year.”

CHC also works closely with Agriculture and Agri-Food Canada and Health Canada on pesticide and crop science issues, invests in research on sustainable production, and has partnered with several organizations on Bees Matter, an initiative to help improve the health of bee populations across Canada.

Kuhl believes farmers take sustainability seriously, knowing they must continue to high-quality, safe produce more on less land and with less water. While he believes the production of fruit and vegetables has demonstrated a positive track record, “we realize that we cannot assume public trust, and that we must continue to work to retain, promote and improve the positive track record. By doing the right thing consistently, we believe our industry will earn the trust of the public.”

A copy of Farm and Food Care Canada’s research report on public trust is available at www.farmfood-care.org/canada/wp-content/uploads/2016/05/2016-Public-Trust-Research-Report.pdf