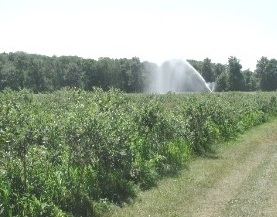 May 23, 2013 – Maximum economic yield with minimum amount of irrigation is a goal for most irrigators. Efficient irrigation water use means providing enough water to avoid drought stress, but not so much that water is lost out of the rooting zone or to runoff from the surface. This includes leaving enough water holding capacity to capture the next normal rainfall thus not losing the value of rainfall.

Early in the season our irrigation goals are often focused on germinating seed and incorporating fertilizers or soil-applied herbicides. In a normal year, May and early June often receive adequate rainfall to meet the needs of the developing crops and plant roots will grow into moisture that is stored deeper in the soil profile. Chances of receiving additional rainfall in the near future are rather good, so irrigation applications are kept to a minimum with the hope that nature will be providing more water soon. Rooting depth is not fully established at this point, increasing the potential of overfilling the soils water holding capacity in the rooting zone, which makes small applications of irrigation water ideal.

The irrigated sandy loam soils of northern Indiana and southern Michigan require about half an inch of irrigation to wet the soil profile down five to six inches. A single half-inch application is often enough to germinate seed, assist in emergence (alleviate crusting) and incorporate fertilizers and soil-applied herbicides. Heavier loam soils may need 0.7 inch to one inch of water to wet the top six inches of soil to accomplish these tasks.

By late June, corn and many other crops near peak water use stages of development. As July nears, irrigation goals need to switch to maximizing water to the root zone. Potential to loose water below the root zone lessens with higher crop water use and less chance of potential rainfall meeting crop needs. Transpiration is more effective use of water than evaporation from soil or leaf surface, providing an opportunity for irrigators to maximize effective water use by minimizing the time they wet the plant leaf and soil surface. Limiting the number of time the foliage is wetted also reduce the potential for many foliar crop diseases.

Coming into this period, irrigators may want to concentrate on closing in on the soil capacity by nearly filling the rooting profile to capacity, leaving just enough room for predicted rainfall. This is especially true for producers close to or short on irrigation water capacity. Short on capacity could be defined as not having the ability to meet daily water removal, 0.25 inches per day or five gallon per minute pump capacity, for every irrigated acre served by the water supply.

In the summer of 2012, daily crop water use (E.T.) for many crops exceeded 0.30 inches per day for several days in early July. Maintaining an adequate reserve of soil moisture is a good insurance policy to help plants manage stress during periods of high temperature. To build in a reserve for extended periods of drought, downtime for repairs, or periods of extreme temperatures and wind, irrigation goals during the peak water use period should be to maintain moisture levels high with enough room to capture a one-inch rainfall.

According to Michigan State University Extension, if a producer’s irrigation capacity is low, this means that the grower should be starting to irrigate prior to peak use or during rainy spells to build moisture level. Many irrigators started too late and could never regain good soil moisture level during the drought of 2012. If you have the capacity to provide one inch every three days, you can afford to gamble on receiving rainfall. For most producers, starting late can lead to poor irrigated yields.

At times of peak water use, the application volume could be as large as 1.5 inches for four to five days of water use. It is all about efficiency. The plant most effectively uses water is through transpiration. Water that is lost from evaporation at the soil surface or on the leaves is less beneficial to the plant, providing only a temporarily cooler environment. Small application may help in evaporative cooling during pollination or other crucial times, but reduces the amount of water that actually gets to the roots compared to fewer large applications totaling the same amount.

In some situations, irrigators have equipment that applies water faster than the water can infiltrate into the soil. In these situations, smaller application volumes will reduce the potential for runoff or uneven application to the roots. In some situations, irrigators will say application greater than 0.30 inches or 0.40 inches seems to runoff. In these situations, reducing application volumes to prevent runoff is more important than potential evaporation losses until they upgrade sprinklers. Sprinklers that provide larger wetted diameters will have less runoff issues. Matching sprinkler performance to field/soil conditions and leaving more crop residue on the soil surface are two methods to reduce potential runoff without increasing evaporative loss from increased number of applications.

Late season applications are reduced down as crop water use declines with increasing crop maturity. At the dent stage of development, corn water use can be as little as 0.15 inches per day on a 75 F day. The chance of receiving rainfall increases dramatically during this portion of the growing season. Applications of 0.75 inches at the beginning of this period may quickly decline to 0.50 inch as the crop nears black layer or maturity.

Crop water use estimates can assist producers in irrigation decision-making. A good source of E.T. rate charts for the most commonly irrigated crops is Irrigation Scheduling Checkbook Method from the University of Minnesota. Additional irrigation scheduling information can be found at the MSU irrigation website.