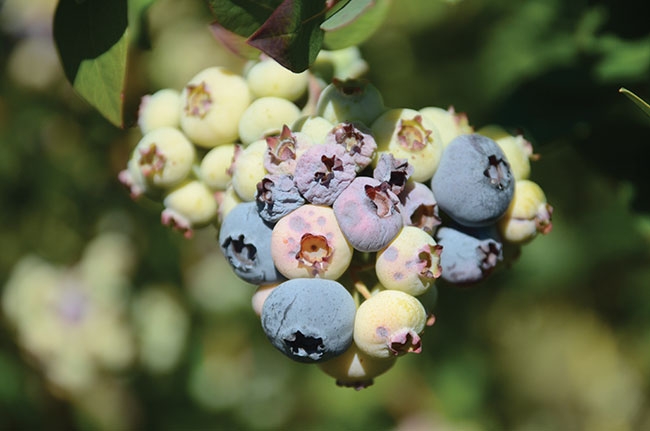 Growers sizing up the impacts a changing climate could have on North America are well aware of two key challenges. One is greater rainfall earlier in the winter, meaning smaller snow packs and less runoff during the growing season. This will contribute to drier summers. Compounding the effects of a drier growing season is a rise in temperatures.

Recent years have been some of the warmest on record, and that’s triggered record forest fire seasons all along the West Coast. And while blueberry growers haven’t seen significant impacts from forest fires, they’re well aware of the need to conserve water. Many older growers have shifted from overhead sprinkler systems; for newer growers, drip irrigation is the norm. But one consequence of the new irrigation systems is that blueberries are more prone to heat damage than in the past.

“Historically, the blueberries we grow here in Oregon were all irrigated by sprinklers,” explains Dave Bryla, a research horticulturist with the U.S. Department of Agriculture’s Agricultural Research Service (USDA-ARS) in Corvallis, Ore. “What growers will often do when they have sprinklers is run them during the day when it gets hot. They didn’t tend to see a lot of this heat damage. But now that most growers are using drip, it’s becoming more of an issue.”

The damage manifests at all stages of berry development. A sudden blast of heat early in the growing season may mean berries don’t develop properly; heat later in the season may result in shrivelling, wrinkling, necrosis and scarring. Sometimes, in cultivars such as Aurora, softness is the key result.

“The berries that are exposed to sun get the most damage, because those get the hottest,” Bryla says. “Usually, it tends to occur when you have cool weather, then all of a sudden the weather gets hot.”

The threshold for damage seems to be about 90 degrees Fahrenheit (32 degrees Celsius), with the risk increasing the more sudden the onset of heat.

“Certainly, once you get above 95 [35 degrees Celsius], you’re going to get heat damage,” Bryla says.

While the phenomenon isn’t well understood, he suspects that a gradual onset of heat may allow the fruit to acclimatize, either through the development of certain proteins or development of a thicker wax layer.

These aren’t temperatures many growers are likely to see in the Fraser Valley, and they’ve also been rare to date in the Willamette Valley where Bryla works. However, they’re commonplace in eastern Washington, and are becoming more common in coastal areas, too. Willamette Valley growers typically see about 18 days where temperatures hit 90 degrees Fahrenheit or more.

Shading berries isn’t practical when dozens of acres are at risk, so Bryla recently led a team of researchers to see if traditional irrigation systems could be adapted to cool the berries without using excessive amounts of water. With funding from the Oregon and Washington blueberry commissions, research was conducted between 2013 and 2017 in the Willamette Valley in Oregon as well as in the vicinity of Prosser in eastern Washington with a combination of microsprinklers for cooling and drip irrigation for nourishing the plants. Compared to traditional overhead sprinklers where water use is measured in gallons per minute, the microsprinklers Bryla used delivered 15.3 gallons per hour, or about 0.1-acre inch an hour (drip irrigation systems deliver less than four gallons an hour).

Droplets from the microsprinkler are larger than from a mister, but they still work through evaporative cooling. Growers in eastern Washington typically use them to protect apples, which are susceptible to heat damage, too.

“We found it works quite well,” says Bryla, who presented his findings to growers attending the Pacific Agriculture Show in Abbotsford, B.C., this past January. “It quickly drops the temperatures of the berries, and it almost completely reduces any signs of heat damage in the field as well as increases the firmness of the berries.”

“If you have to harvest the next day, that’s an issue,” Bryla says.

The wet ground makes it tough for workers to move through the rows, the moisture may make the berries susceptible to disease or reduce shelf life and – whether it’s a material difference or not – the number of slugs increases.

Researchers therefore investigated whether an intermittent spray could reduce water usage while resulting in cooler fruit. Settings were adjusted so that the overhead system cycled on for 20 minutes each hour, and every 30 minutes, to see whether or not the sprinklers had to run constantly.

“The berry temperatures were reduced quite well when the sprinklers were on, but they did heat up a little bit. But they never got to the temperatures of the uncooled berries,” Bryla says. “You didn’t see the heat damage when [Joy] did this.”

Aurora seemed to benefit the most from the strategy (tests were also conducted on Elliott). Berry weights in cooled berries averaged 2.04 grams, versus 1.74 grams in the control; firmness was measured at 224 grams /millimetre, versus 170 g/mm. Brix was slightly reduced.

The trials suggested that growers could see significant benefits from using overhead sprinklers to cool fruit during the handful of days when it’s needed each year.

“What we suggest is running it at least 15 to 20 minutes every hour, and that seems to work quite well,” Bryla says. “Your berries are going to cool down and then they’ll continue to remain cool while that water evaporates. And ideally, you turn [the sprinklers] on again before the temperatures get too hot for too long.”

Bryla also recommends cycling through blocks, which also helps to manage water demand because not all blocks are being irrigated at once. A field may be divided into four, for example, and the system turned onto each quarter for 15 minutes every hour. Water flow will remain constant, but will be directed to a different quadrant, rather than requiring four times as much all at once.

“It might be three, four days at most that you might have to do it in a given season,” Bryla says. “But if you don’t do it, you might have 10 per cent crop loss or even higher, or you might end up having to sell your fruit for processing rather than for fresh market. So, having such a system could pay for itself quickly, if it’s needed.”