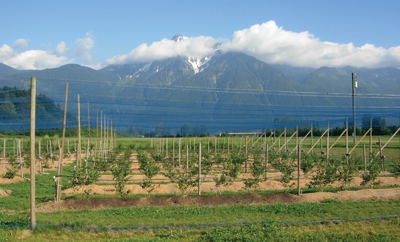 Farming is an industry of slim margins and big investments. For berry growers and other horticulturists, knowing how best to deliver water and nutrients to plants, for increased yield with minimal input, can help close that gap. Finding this balance allows growers to optimize their farming practices, make informed investment decisions about their equipment and increase profitability.

A team of Agriculture and Agri-Food Canada (AAFC) researchers from the Pacific Agriculture Research Centre in Agassiz, B.C., recently presented preliminary results of two studies during the Pacific Agriculture Show. The first study was designed to help the blueberry sector improve management of drip irrigation systems, and the second, to determine the most effective rate and method for applying nitrogen.

Can you over-irrigate?
Conventional irrigation wisdom says that if you want to increase berry production, you increase water, but research shows that there are limits to that logic. Although irrigation has benefits, sometimes less is more.

“Currently, most blueberry growers in B.C. irrigate via drip irrigation, but do so without really knowing how much to apply and when to apply it. In short, they guess,” says Dr. David Ehret. “The effects of irrigation on the crop are also not fully understood. What are the effects on yield and fruit quality? Does overwatering increase root disease? The study is trying to address some of those questions.”

The study included data from two sites – a grower’s field in Matsqui and research plots at the research centre in Agassiz. Each site had three treatments: a non-irrigated control, a plot with 18 inches between irrigation lines and another with 12-inch spacing. Because both the 12- and 18-inch spacing received irrigation at the same time and for the same duration, the plants in the 12-inch spacing received 50 per cent more water. The Agassiz plots also had two different irrigation volumes – high or low.

At the grower site, the irrigated treatments both had higher yields than the non-irrigated control, but the 18-inch spacing outperformed the 12-inch plot that had received 50 per cent more water.

The effects on fruit quality followed a similar trend. Fruit from the irrigated plots was larger, but there was no difference in fruit size between the irrigated plots, indicating that there is a point at which increasing the amount of water to a plant stops having a benefit for the grower.

Also of note, fruit from the non-irrigated plots were the most firm, and also the sweetest, so although irrigation yielded more and larger fruit, it reduced the firmness and sweetness.

At the Agassiz location, where the research team had control over all aspects of the irrigation architecture, volumes, and timing, the results followed the same trend. Irrigation increased production, but the low-volume treatment had the highest yield, about 10 per cent greater than non-irrigated, and similar or even slightly greater than the high-volume treatment.

Fruit quality data were also consistent between the two sites. Irrigation treatments produced larger fruits than the non-irrigated treatment, but there was no difference between the low and high treatments. They also found that fruit firmness was only reduced at the high-volume irrigation rate. There were no differences in sweetness at the Agassiz location.

“There are trade-offs for irrigation,” says Dr. Ehret. “Even with moderate irrigation, there are pros and cons. You’ll have to decide which outcomes are the most important.”

One of the interesting results, for growers considering drip irrigation systems, was the finding that the architecture of the system – the number of lines and emitter density – did not have an effect on yield or quality in these studies.

“As long as the total irrigation volume per plant was the same, it didn’t matter if the water was administered with one line or two,” says Dr. Ehret. “It was the same with the emitter spacing.”

“Irrigation is not simply a matter of more is better. High irrigation is wasteful of resources and in some ways, may be detrimental,” says Dr. Ehret. “So the message that growers can take away is that they should be careful about their irrigation strategies. Tools and methods are readily available today for growers to use in order to adjust irrigation more precisely.”

Managing nitrogen
Nitrogen is a major nutrient and is often limiting for plant growth and production. Researchers are trying to determine the most effective rate and method of applying nitrogen for blueberries and are assessing their impacts on a number of production and quality factors.

The aphid data are important because aphids carry blueberry scorch virus from plant to plant. Aphids feed on plant sap, which is a dietary source of nitrogen, so the study is looking at the amount of nitrogen that plants receive and possible effects on aphids.

“We also wanted to find out if the method of application of nitrogen was important in yield, fruit quality and aphid management,” Dr. Ehret adds. “Broadcast is the conventional method, but fertigation is increasing in popularity, so we compared the two.”

Fertigation delivers dissolved fertilizer to crops through an irrigation system. The technique is gaining popularity with growers because it increases nutrient absorption by plants, reduces the amount of fertilizer that is needed, and reduces nutrient leaching into the water table. It also reduces labour costs for fertilizer application.

“In the results so far, young plants with fertigated nitrogen had improved yield and fruit firmness with increasing rate of application, but broadcast did not. This suggests that fertigated nitrogen was more readily available to the plant,” says Dr. Ehret. “There have been no effects on aphids, but these are early results. It’s too early to suggest a take-home message in this study, but I think it’s safe to say that fertigation looks promising.”

Both the irrigation and nitrogen trials will continue over the next two years. ❦