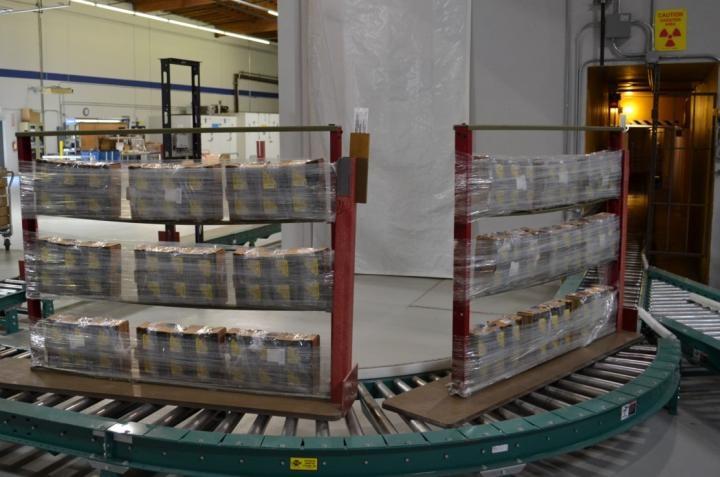 These are blueberries ready to enter the x-ray unit at the irradiation facility.

January 7, 2016, Orange, CA – New research reveals that irradiation can also be effective for treating blueberries and grapes for export without compromising fruit quality.

It is often necessary to treat produce for insects in order to transport crops out of quarantine areas. Fumigation with methyl bromide, one of the most common treatments, is in the process of being phased out because of its depleting effect on the ozone layer. Alternately, ionizing irradiation at low doses is being used worldwide as a promising phytosanitary treatment for fruit such as guava, rambutan, and mango.

Star, Jewel, and Snowchaser blueberries and Sugraone and Crimson Seedless grapes were irradiated at a target dose of 400 Gy (range of 400-590 Gy for blueberries and 400-500 Gy for grapes) and stored for three and 18 days under refrigeration, plus three days at ambient temperatures.

The fruit was then evaluated for soluble solids concentration, titratable acidity, and weight loss. With respect to these quality attributes, the results showed differences among fruit varieties, but the researchers found treatment effects to be “not significant.”

The study also involved sensory tests in which consumers evaluated the fruit on appearance, flavour, texture, and overall “liking.”

“Firmness was the primary attribute affected by irradiation for both varieties of grapes, but sensory testing showed that consumers did not have a preference for control or irradiated fruit,” the authors said. “However, sensory scores for flavour were higher for the irradiated berries than the control berries after storage, suggesting a decline in quality of the control blueberries with time.”

The authors said the research showed that (in terms of quality) irradiation at 400 Gy can maintain blueberry and table grape quality sufficiently to meet transportation, distribution, and storage needs for overseas markets.

“Our results show that both blueberries and grapes have a high tolerance for phytosanitary irradiation and that storage affects their quality more than irradiation treatment,” they concluded.

The complete study and abstract are available on the ASHS HortScience electronic journal web site: http://hortsci.ashspublications.org/content/50/11/1666.abstract.