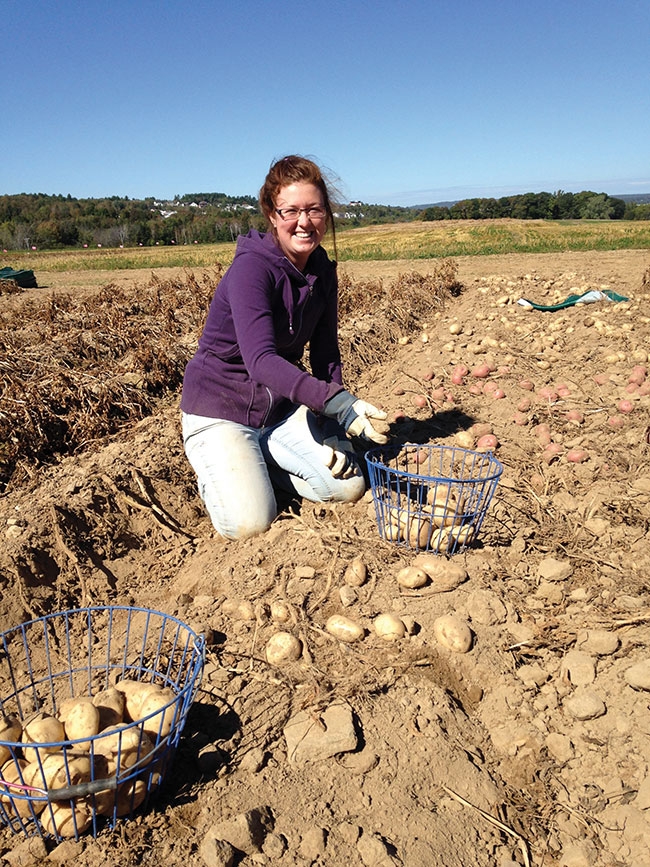 In January 2013, a group of industry representatives came to Bernie Zebarth with a problem: according to crop insurance data, potato yields in New Brunswick were stagnating or declining.

“Seven years ago we were tasked with increasing our yields and keeping costs as low as possible in order to be more competitive with our North American processors and maintain our markets,” explains Matt Hemphill, executive director of Potatoes New Brunswick.

The group quickly formed a steering committee consisting of McCain Foods, Potatoes New Brunswick and the federal and provincial governments, and hired
a manager.

“We looked at our soil, seed, water management and technology, and we also looked at sustainability and the economic side of things to make sure we were going to remain profitable,” he says. “We quickly determined that we had some soil health challenges, low organic matter and compaction issues and other problems that were related directly to yield.”

Zebarth, a research scientist at the Fredericton Research and Development Centre, initiated a project later that year to look into the issue in the province.

“The real issue for us – and this is true for all of Canada, but particularly New Brunswick – is that our potatoes are mostly intended for export. The market we have here is the eastern seaboard of the U.S. If we can’t be cost competitive we lose that market,” Zebarth says.

“Our goal was twofold: we wanted to identify what is limiting yield, and secondly, determine what we can do about it.”

Zebarth’s project became a comprehensive five-year investigation into multiple factors influencing yield in both the eastern provinces and Manitoba. Studies sought to identify zones within potato fields in which yield was limited, to zero-in on the causes of those limitations, and finally to evaluate practices that might overcome those problems.

Under the project’s third mandate – to evaluate practices that might overcome yield limitations – the team quickly identified soil health and soil-borne diseases as key “yield robbers,” and began studies looking at practices that might mitigate these problems, including the use of nurse crops, fall cover crops, biofumigation, variable rate irrigation, in-furrow decompaction and the use of compost.

Zebarth says the work points to soil health as being absolutely key to productivity.

“The fact that soil health is declining is one of our main findings – this shows itself as a loss of organic matter, loss of soil structure, loss of biological activity and compaction,” Zebarth says. “But we didn’t anticipate our second main finding, which is how important soil-borne diseases are.”

The two factors are linked, he says, and although his team doesn’t yet have indisputable evidence backing the claim, they believe the better the soil health in a given field, the less susceptible that field is to soil-borne diseases.

Soil-borne diseases – particularly Verticillium wilt – were issues in almost all of the team’s trial sites, Zebarth says, and the presence of root lesion nematodes, which increase the severity of disease symptoms, were also wide spread. The disease also seemed to mask some of their efforts. In other words, disease pressure could limit positive outcomes of beneficial practices.

“Once you begin to look for something you start to see it everywhere,” he says. “We realized we had a far bigger disease problem than we thought.”

Compost and soil health
Zebarth says that at the very beginning, his industry collaborators asked him, “If we’re going to focus on one practice, what would have the best odds of increasing yields?” The answer, he says, was compost, as it can help build soil organic matter relatively quickly.

Two major compost studies were set up – an on-farm trial that was mostly conducted by McCain agronomists, and a small plot trial run by Zebarth at the Fredericton Research and Development Centre.

The on-farm trials compared paired strips – one treated with compost, the other managed conventionally. The compost used in the field trials was a wood waste-based product.

Results from the on-farm trials weren’t hugely promising, says Zebarth, with some producers noticing slight improvements in yield, at levels insufficient to justify the cost of the compost. In the small plots, the researchers noticed a dramatic increase in soil organic matter and an increase in many indices measuring soil health – but, again, little yield benefit.

“We increased soil organic matter by 25 per cent and doubled organic matter fractions used as indicators of soil health, but we didn’t really increase water holding capacity, to our surprise,” Zebarth says. “Many of the indices were around organic matter and they pretty much all improved. But we didn’t see a crop response.”

Zebarth says these findings led to a discussion among the collaborators.

“I think we evaluate soil conservation practices incorrectly,” he says. “If you’re looking at an application of a fertilizer or crop protection product, you look at whether it was a wise decision based on return on investment the following year. There is likely no soil conservation practice that would meet that threshold because the benefits are diffused over the long term. How do you put a dollar value on that?

“Soil conservation is less about return on investment in the short term, and more about soil as part of the farm “infrastructure.” Here in New Brunswick, the land itself may constitute about 50 per cent of the value of the farm operation. The infrastructure – the soil – makes growth or profit possible. Let’s maintain that,” Zebarth says.

For producers thinking of using compost on their operations, he says to look for low-ash composts with as much organic matter as possible. It should also be dry, because compost is purchased by weight, and matured, so nutrients are available to crops.

Two trials were evaluated for the nurse crop study; a one-year screening trial and a three-year trial that incorporated the findings of the screening trial, says Hann. In the first trial, he and his team evaluated three possible nurse crops for potatoes – field pea, buckwheat and winter rye – and two planting methods (drill and broadcast). They settled on field pea and winter rye as the best options for the longer trial; they also found that drill planting was most effective.

Nurse crops were seeded at two rates – high and low – and planted two days prior to potatoes, says Hann. They were then terminated 20 days after planting via hilling or chemical desiccation followed by hilling.

Hann is currently analyzing “over 300 variables” of data collected from the study.

“What I expect is that the evaluation of the plant and soil data will provide insight into the potato yield responses. Understanding the competitive and/or nutrient enrichment effects of the nurse crops on the potato crops will become clearer once we get more into the data,” he says.

But Hann echoes Zebarth in claiming that although yield responses are negligible now, they might show up further down the road.

“Nurse crops are not a silver bullet,” he says. “We were hoping that we’d add something to the equation that won’t have a detrimental effect on the crop. The nurse crops intercept the rainfall, allow moisture to stay in the potato hill, add organic inputs and potentially have effects on soil physical and chemical parameters as well,” he says.

“Verticillium seems to be everywhere,” Zebarth says. “It’s just a matter of degree.”

Follow-up work on Verticillium across all main Canadian potato production areas is planned in collaboration with the Canadian Horticultural Council.

A major emphasis of the research effort is the development of a method for testing Verticillium levels, Zebarth says, because there are as yet no reliable commercial tests.

Diagnostic tools are also needed for root lesion nematodes, and Zebarth says his AAFC colleagues are working on developing PCR based tests to improve testing accuracy.

Overall, improving cropping systems via lengthened rotations, the use of compost and nurse crops and other beneficial management practices represent the best opportunity the industry has for improving soil health and mitigating disease, he says.

Data is just rolling in on the use of biofumigation via the use of crops such as mustard, says Zebarth, and while this method shows promise for mitigating pest pressures, it does mean producers have to use more tillage, which tends to break down organic matter.

“There are lots of trade-offs,” he says. “These methods should all help, but how much and how long it’ll take is less clear. You can’t change soil health overnight.”

Hemphill says the steering committee sees the five-year project as a success. “We’re in the process of wrapping things up in order to move on to other focuses,” he says. “But we’re continuing to encourage our processors and provincial and federal governments to work together with industry and continue communicating so we know what everyone is working on when it comes to research. We’ve come a long way.”