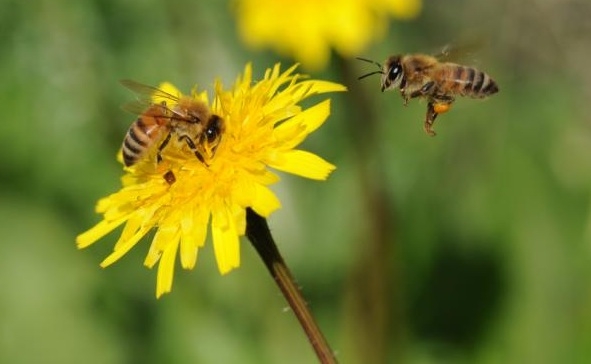 July 5, 2013 – New research by academics at the University of Nottingham has shown that exposure to a neonicotinoid insecticide causes changes to the genes of the honeybee.

The study, published in the scientific journal PLOS ONE, supports the recent decision taken by the European Commission to temporarily ban three neonicotinoids amid concerns that they could be linked to bee deaths.

There is growing evidence connecting the decline in the honeybee population that pollinates one-third of the food that we eat, and insecticides, but this is the first comprehensive study to look at changes in the activity of honeybee genes linked to one of the recently banned neonicotinoids, imidacloprid.

The study, led by Dr Reinhard Stöger, associate professor in epigenetics in the university’s School of Biosciences, was conducted under field realistic conditions and showed that a very low exposure of just two parts per billion has an impact on the activity of some of the honeybee genes.

The researchers identified that cells of honeybee larvae had to work harder and increase the activity of genes involved in breaking down toxins, most likely to cope with the insecticide. Genes involved in regulating energy to run cells were also affected. Such changes are known to reduce the lifespan of the most widely studied insect, the common fruit fly, and lower a larva’s probability of surviving to adulthood.

“Although larvae can still grow and develop in the presence of imidacloprid, the stability of the developmental process appears to be compromised,” said Dr. Stöger. “Should the bees be exposed to additional stresses such as pests, disease and bad weather then it is likely to increase the rate of development failure.”

The study was funded by The Co-operative Group, as part of its Plan Bee campaign.

“This is a very significant piece of research, which clearly shows clear changes in honeybee gene activity as a result of exposure to a pesticide, which is currently in common use across the UK,” said Chris Shearlock, sustainable development manager at The Co-operative.

“As part of our Plan Bee campaign, launched in 2009, we have adopted a precautionary approach and prohibited the use of six neonicotinoid pesticides, including imidacloprid, on our own-brand fresh and frozen produce and have welcomed the recent approach by the European Commission to temporarily ban three neonicotinoid pesticides as this will allow for research into the impact on both pollinators and agricultural productivity.”