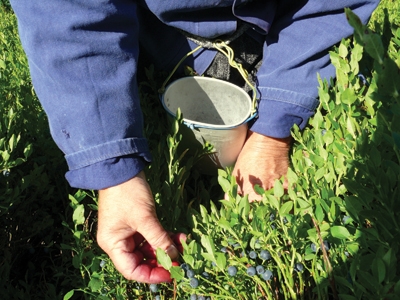 “Real innovation comes from you guys; the growers,” he told a crowd of blueberry producers during the recent Wild Blueberry Producers Association of Nova Scotia’s (WBPANS) annual general meeting.

A horticulturist with the Nova Scotia-based AgraPoint consulting service, Burgess says there is now an alternative to the traditional tractor-mounted harvester head. He recently took part in the trial of a Briggs and Stratton-powered self-propelled, walk-behind harvester, equipped with a 25-inch-wide harvester head fitted with four rotating bars of teeth.

The walk-behind harvester has an advantage in fields with just average yields of 2,000 pounds per acre or if the crop prices are low, but it is not practical “if you don’t have access to fit labour or it has to operate on high-yielding fields of 4,000 pounds per acre,” he says.

Burgess also recommends that growers pay attention to the harvesting head of their tractor-mounted harvesters. If it gets clogged, berries will be lost from the collection drum inside the harvester head. He recommends that growers fit small flaps of belting material to the fins on the belt that conveys berries from the drum to the collection boxes. These flaps will keep the inside of the drum free from stems, leaves and other harvesting debris so the blueberries will not be spilled on the ground or crushed in the drum. The fins are about four inches apart, explains Burgess, and six or seven flaps should be sufficient to affix to the fins on the belt.

Blueberry fields are typically burned after harvest in the crop year to prune and sanitize fields, thereby reducing weed and disease pressures for the following sprout year. But Burgess notes sickle bar mowing with a tractor is a field management alternative. The cut vegetation can be left to dry over the winter and then burned early in the spring, he suggests, adding that this technique does not require the use of an oil burner and will help reduce the cost of fuel.

The critical point to remember is to burn the debris early in March before the blueberry plants sprout, cautions Burgess.
“Not when it suits you,” he adds.

He also recommends that growers flail mow a strip around the edges of the field to mulch the vegetation then burn downwind of the field’s edge in the morning. In the afternoon, the rest of the field can be burned when it is drier.

“Remember, you will produce a lot of smoke and it burns hot because there will be a lot of material to be burned,” Burgess says. “Don’t burn in windy conditions.”

Some fields, however, cannot be sickle-mowed due to hilly conditions or fire restrictions, he says. Because there is a liability
issue involved; Burgess recommends growers faced with these restrictions talk to other growers who have used the technique.
“Burn efficiently because the question is how much longer we will be allowed to burn,” he says.

The Nova Scotia Agricultural College began development on a field sanitation prototype this past autumn. An evaluation of the technology is expected to take place in 2011. Dr. David Percival, blueberry research chair at the college, and Dr. Qamar-uz-Zaman, the precision research chair, are working closely with Oxford Frozen Foods on the three-year, $3.14-million project. The WBPANS, plus wild blueberry producers in New Brunswick and Prince Edward Island, have contributed funding to the project, as has the Canadian Horticulture Council with a $693,343 donation as part of its edible horticulture program. ❦