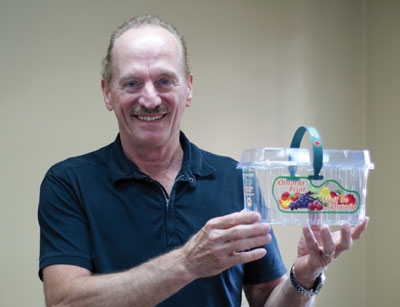 The agriculture industry, like all other sectors, requires lots of fresh ideas and novel thinking to keep it profitable and vibrant on an ongoing basis. Indeed, during challenging times such as these – with high input costs, ever-expanding global competition and consumers that demand more – innovation is the only way to flourish.

Vortex Packaging is one of those innovations. Invented by Phil Short, who owns NBF (Niagara’s Best Fruit) Produce of Vineland, Ont., Vortex recently won the Premier’s Award for Agri-Food Innovation Excellence from the Ontario Ministry of Agriculture, Food and Rural Affairs (OMAFRA).

Vortex containers are see-through, lidded, easy-to-handle, stackable – all features that combine to make them a solution to many problems that Short had noticed over his long career in the produce industry.

“My background gave me what was necessary to design something that would satisfy the retailer, consumer and grower,” he says.

Development of the containers took two years and began in 2007. The Vortex basket was marketed by 2009, and has since expanded its reach from coast to coast. Short is an avid cyclist, and chose to name the containers after one of his favourites: the Litespeed Vortex bicycle.

Solution to problems
“One big issue with the open cardboard basket is that it allowed consumers to touch the fruit and exchange fruit from one basket to another,” he explains. “These baskets also could not be stacked and required retailers to constantly replenish the display.

“I could see that retailers were trying to reduce store labour and were attracted to consumer-ready packaging that required less maintenance and created attractive displays.”

“It presents well, is easily managed and reduces retail shrink by about 20 per cent,” says Short. “It allows you to easily create stepped pyramid displays that are eye-catching with little effort. Consumers like to be able to see through the containers, and we have proven that the Vortex basket increases storage life by seven days through retaining moisture and re-hydration of the fruit.”

Vortex first used virgin PET plastic as it provided the best clarity, but later switched to a plastic containing 50 per cent minimum post-consumer material in order to support recycling of used plastic. By 2009, the company was testing a prototype model in Loblaw stores in Ottawa and made several design and mold changes before arriving at the finalized production model – the first clear plastic basket with a handle used in a major retail market.

“The biggest challenge in the design process was coming up with a shape that would allow stacking at least four layers high and still look attractive,” says Short. “Stackability is very important for retailers to be able to create large volume displays to satisfy sales with minimal labour.”

With respect to manufacturing, the main challenge was applying the side label and end label in a continuous production line. How was this solved? Specialized labelling equipment was designed to apply the labels.

As word got out, a large potato shipper suggested that Vortex include a tinted lid to protect potatoes from the fluorescent lighting at retail stores.

“The tinted lids are still being tested for effectiveness of greening,” says Short.

Vortex has recently introduced a one-litre container specifically for berries.

“We’re targeting the berry industry because we saw an increase in blueberry production and consumption,” he explains.

“With that demand, we figured consumers would want to buy more blueberries and in larger containers.”

When asked whether he sees any limitations for size or type of fruit or vegetable, Short says, “There are no reasonable limits for our lidded baskets and we are currently designing ones larger than three litres.”

Vortex containers themselves do cost a little more, but Short believes when all aspects are taken into account, they save money.

“The cost difference is really just for the lid, as the cardboard basket has a bottom and handle with no lid,” says Short, “but this extra is completely offset by proven improved sales and reduced retail shrink, for better displays and a fresher product for the consumer.”

Short has no plans to move into international markets at this time but the company has nonetheless attracted international attention. “We are attending the U.S. Produce Marketing Association Fresh Summit in Anaheim, Calif., soon as Vortex is one of the top 25 finalists for their packaging excellence award,” says Short. “We’re excited about it and very delighted with the Regional Premier’s Award as well.”

He says the biggest lesson he has learned during the creation of new packaging is that “retail sales are what it’s all about. They drive everything from the ground up.”

He notes the whole experience has been valuable in a variety of ways.

“I’m very grateful for having the opportunity to supply our packaging to other growing regions outside Niagara,” he says.

“I’ve also met many other innovative people and been exposed to new cultural practices in agriculture. It’s a very dynamic field.”