Research sheds light – literally – on how to improve the nutritional value of grocery store fungi. 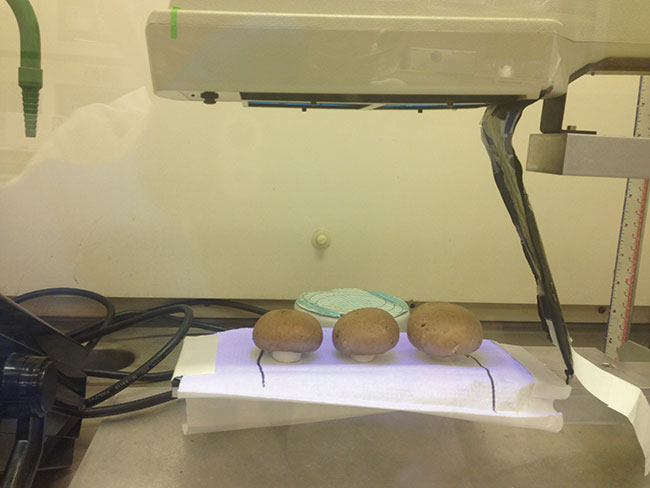 Mushrooms in Shao’s lab. All photos courtesy of AAFC.

Everyone knows that vitamin D is good for you. Study after study has shown its benefits, particularly for promoting calcium absorption; it facilitates bone growth, reduces the risk of osteoporosis and rickets, minimizes inflammation and modulates cell growth. Because of this, vitamin D is a common additive in breakfast cereals, milk and other goods.

But there’s only one item in the produce aisle that naturally contains it: mushrooms.

Although they’re treated as vegetables, mushrooms actually belong to the eukaryotic kingdom of fungi. They contain a high amount of ergosterol, a sterol (or steroid-based alcohol) in their cell membranes. Ergosterol performs similar functions to cholesterol in animals – such as strengthening cell walls – but is also considered a precursor to vitamin D. This is because, when UV radiation hits a mushroom, some of its ergosterol is changed into vitamin D2.

Here’s the thing: the vitamin D in most conventionally-grown mushrooms is very low. That’s because they’re grown in darkness. Studies have shown that mushrooms grown outside can contain three times the amount of vitamin D2 of mushrooms grown in the dark. 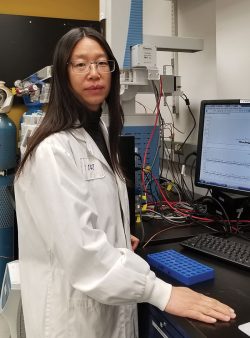 Suqin Shao, an AAFC research scientist at the Guelph Research and Development Centre.

Suqin Shao, an Agriculture and Agri-Food Canada (AAFC) research scientist at the Guelph Research and Development Centre, recently shined a light on this problem. Specifically, a radiation lamp.

Working together with colleagues at universities in China, Shao developed an experiment to test the long-term effects of exposure to UV-C radiation (200 to 280 nanometres (nm) in wavelength) on brown and white button mushrooms (Agaricus bisporus), in combination with cold storage at 4 C. UV-C light is used in sterilization, she says, but past studies have mainly looked at immediate impacts of exposure on ergosterol and vitamin D2 content.

“We know that the levels of vitamin D in mushrooms is very low. We wanted to see how the UV-C treatment would affect vitamin D and hypothesized that we would see an increase,” Shao says. Crucially, they also wanted to see whether those levels stayed high after prolonged cold storage of up to 14 days – a real-world condition.

Typically, the ergosterol content of mushrooms is between 0.6 and 0.7 per cent of their dried weight, and cultivated mushrooms are deficient in vitamin D2, the authors state in the beginning of their publication on these findings. “When mushrooms are exposed to UV light (270 to 310 nm), ergosterol undergoes photolysis and results in an increase in the amount of previtamin D2, which rapidly isomerizes to vitamin D2.”

Study setup and findings
To conduct the study, mushrooms were harvested and collected from two farms and transported to Shao’s lab, where they were immediately exposed to UV-C light.

The mushrooms were placed on a holding tray under the UV-C light reactor with their caps facing towards the lamp and irradiated for zero, 50, 100 and 200 seconds. Then they were turned upside down so their stems received the same doses.

The researchers found that the greater the exposure to UV-C light, the more ergosterol reduced. But the stored caps and stems gained ergosterol over time.

The researchers found that immediately after UV-C treatment, vitamin D2 increased in mushrooms, both in caps and stems.

Interestingly, over time, the amount of vitamin D2 in the mushrooms reduced in cold storage – except in brown button mushroom stems, which continued to gain vitamin D2 during the whole study period. It’s the first time this “reducing effect” in cold storage has been recorded for mushrooms.

Vitamin D2 more than doubled in the treated versus untreated samples, Shao says, and would increase even more under higher doses of UV-C light.

“The dosage we used was really for proof of principle,” she says. “Later on, we could modify UV-C dosage for the industry.”

Currently, Shao says UV-C light is not used in the industry except as a sterilization tool. In mushrooms, it isn’t commonly used at all.

For that reason, she believes the findings could add significant value to Canada’s mushroom industry as more and more studies emerge from labs around the world linking vitamin D to health benefits.

But there are other hurdles to jump through first.

“The UV-C lamp is just the first step,” Shao says. “We need to consider infrastructure, fertility and lots of other factors to apply this technology. But there’s potential here.”