Features Production Vegetables
Impact of winter temperatures on asparagus in 2014 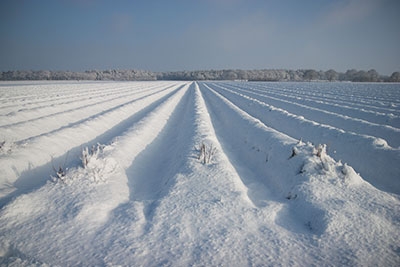 There is little information available as to the effects of extreme winter cold on the asparagus crop.

There is little information available as to the effects of extreme winter cold on the asparagus crop.

However, recent research at the University of Guelph is helping to better understand the impacts of fall and spring freeze events on asparagus growth and development. From these studies, it appears that fall senescence and springtime freeze-thaw fluctuations, may be more important factors for winterkill than the actual winter temperature lows.

The subject of winterkill in asparagus is a difficult one to address. Unlike many fruit trees where the buds can be assessed for damage, there is no reliable way to evaluate the full impact of cold temperatures on the crowns in a commercial setting.

Complicating the matter is the fact that damage to the crowns may not be readily apparent in the following season. Unless the buds are injured, there may be no impact on the initial yields. However, damaged crowns may lose vigour and experience increased plant morality over time, due to contributing factors including disease susceptibility.

Ideally, the fern of asparagus should die back gradually in the fall, allowing carbohydrates and nitrogen to move into the storage roots and the roots to partially dehydrate over a period of time. A crown may not be sufficiently “prepared” for the winter freezing conditions if:

Ideal temperatures during senescence are 10 to 20 Celsius, with a gradual decline towards 0 Celsius. According to data from the Delhi, Ont. area, the growing conditions during the fall of 2013 were suitable for a gradual senescence of the crop.

The breaking of dormancy in the spring also plays a role in the impact of cold temperatures. Based on the University of Guelph study, once the crowns break dormancy they become less tolerant of freezing conditions. Both the emerging spear and crown are susceptible to damage from cold temperatures. As a result, late-spring freeze-thaw activity may have a large impact on both the initial yields and the long-term productivity of the asparagus plantation.

The University of Guelph studies found that Jersey Giant stayed green longer in the fall and it was often still green at the time of the first killing frost. Millennium, however, began senescence much earlier. In fact, it was more tolerant of cold temperatures on October 1, than either of the Jersey Giant or UC 157 varieties.

In the spring, both Jersey Giant and UC 157 were released from dormancy earlier than the Guelph Millennium. It is possible that Guelph Millennium’s longer dormancy period may make it less susceptible to winterkill caused by fall frost and spring freeze-thaw events. ❦

Elaine Roddy is a Vegetable Crops Specialist with the Ontario Ministry of Agriculture and Food and the Ministry of Rural Affairs. David Wolyn is with the Department of Plant Agriculture at the University of Guelph