Rethinking inventory, supply chain shifts, investments into regional processing – a pandemic shines a light on if Canada’s food system is built to last. 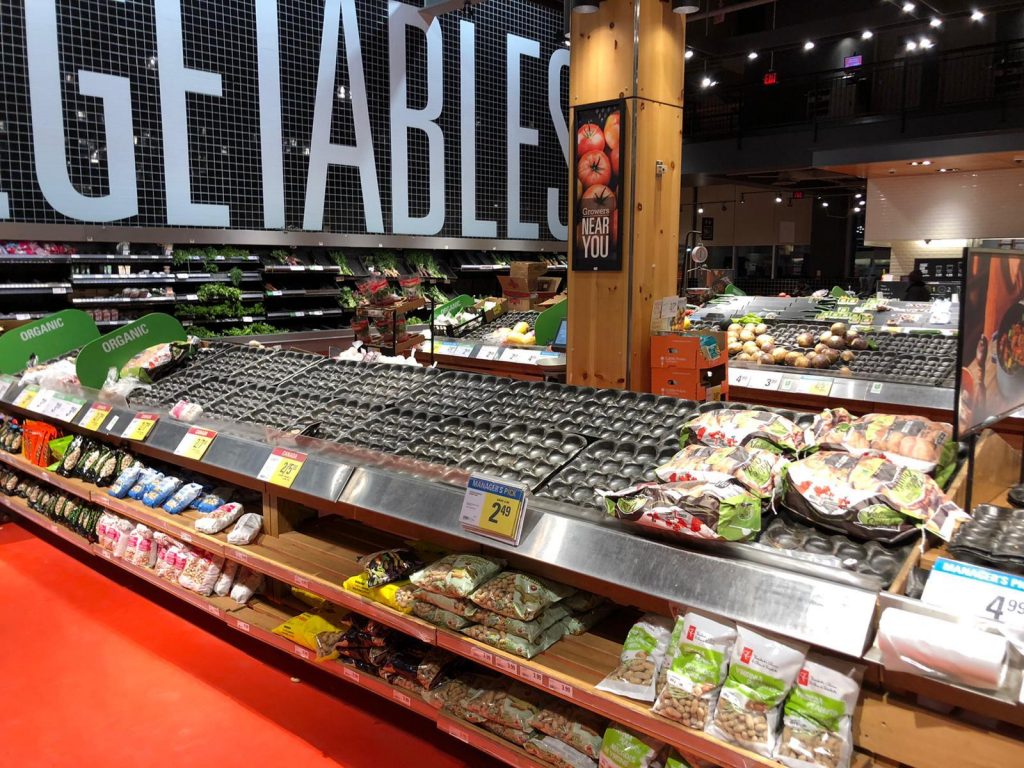 An early spurt of panic buying in grocery stores prompted the question: how will the COVID-19 pandemic impact Canada’s food system?

Evan Fraser, director of Arrell Food Institute and associate professor at the University of Guelph with a focus on global food security, shares his thoughts on what the COVID-19 pandemic means for Canada’s food system.

Fraser says Canadian producers can expect to see a shift in demand from large vendors to regular consumers shopping at grocery stores, but no dramatic demands or shortages overall. On a more philosophical level, the discussion prompts larger questions about the who produces and distributes food.

After the World Health Organization declared the novel coronavirus (COVID-19) outbreak a pandemic on March 11, some Canadians reacted by stockpiling goods and panic buying. While store shelves were being emptied out, were these effects going to be felt in farmers’ fields or greenhouses?

“We’re in such uncharted territory so I’m going to say no, but the growers can probably answer that question better than me,” begins Fraser, acknowledging that the COVID-19 situation is changing rapidly and it’s hard to predict any impacts. “I think it’s more of a grocery store issue, more of a supply chain logistics issue [because] the same number of meals are coming onto people’s plates as there were two weeks ago so the function of demand should be stable.

“My gut feeling is perishable products supply essentially hasn’t changed, demand certainly hasn’t changed, except for maybe a short-term blip associated with panic buying. They might clear up the shelves this week, but next week, the shelves should stock again . . . [and] it should level itself out despite the sort of the weirdness of the last 10 days.”

However, he notes that while demand will most likely remain stable, the type of demand might shift. Several major businesses, such as sports arenas, airlines, school cafeterias, restaurants, and so on, have either ceased operating or have significantly reduced their services. Fraser says that the nature of buyer has fundamentally changed because of these businesses closing or reducing their services.

“The question I’d be asking is, if people are eating at home a lot more, how does that change buying habits over the next four months? – because this isn’t going to go away until the end of the summer,” Fraser says. “Does the homebuyer produce different kinds of demands for different products than a restaurant purchaser, cafeteria buyer, airline buyer, or sport venue?”

“Does the homebuyer produce different kinds of demands for different products than a restaurant purchaser, cafeteria buyer, airline buyer, or sport venue?”

Sports arenas may buy a lot of potatoes (to make fries), but Canadians also show a strong preference for potatoes. In a consumer insight survey conducted by Leger 360 in early 2020, potatoes, carrots, apples and strawberries are some of the most consumed produce by Canadians in the past 12 months. Over the next four months, will grocery stores see consistent demand for popular produce like potatoes, carrots, onions, apples, strawberries, and grapes?

Another aspect to note is where consumers will buy their produce. Fraser says it’s more a “reorientation away from venues” and toward grocery stores. “I, as a consumer, am not going to buy more or less bananas, but instead of buying them at Pearson [International Airport], I’m going to be doing that via No Frills [grocery store]. So that’s where the pivot I think has to happen,” Fraser says.

To sum it up, the total demand for product will most likely remain the same but the supply chain that meets that demand is going to shift over the next few months. The bigger venues that used to buy lots of produce, aren’t buying as much, if any, right now. “I think people are going to be shifting their purchasing power to the local grocery stores,” Fraser continues. “So there’s going to be a big supply chain reorganization happening here.”

Fraser also notes that Canadians are very fortunate that the country is entering its growing season where there will be a robust domestic supply of produce available over the coming months.

“I think that if COVID-19 had hit us in September or October, this might be a different conversation. We’re going into the growing season right now, it’s not going to be very long before our producers have fresh product,” Fraser notes.

Fraser acknowledges that the pandemic will impact Canadians differently. “Those of us who are privileged Canadians have never seen scarcity, and we are suddenly visually witnessing scarcity on our shelves in the last few days [with panic buying] and that is a terrifying prospect,” Fraser starts. “We have to acknowledge that there are four million food insecure Canadians for whom scarcity is a daily experience.”

“We have to acknowledge that there are four million food insecure Canadians for whom scarcity is a daily experience.”

In direct response to the blip of panic buying, Fraser says Canadians should not panic. “The supply chains are good, they’re robust. There was a short-term run on things, but fundamentally our demand and our supply for most of what’s in the grocery store hasn’t altered and within two weeks there will be a return to some degree of normality,” Fraser says.

Bringing food production to the forefront

Did seeing empty shelves help bring food production and the growers, delivery personnel and grocery store workers, to the forefront?

For a majority of Canadians, a minimal percentage of their income is spent on food compared to other parts of the world and therefore, it’s easy to not pay attention to food. According to Statistics Canada, Canadians spend around 13 per cent of their income on food. This percentage is low compared to other countries such as Azerbaijan, Guatemala, and Nigeria, who spend over 40 per cent of household income on food, according to the World Economic Forum. If you’re spending almost half your income on food, you’re going to pay attention to it.

It is all relative, but Fraser does not deny that spending such a low part of income on food warps our view of food and we pay less attention to it. “We do live in what some scholars have called a ‘cheap food regime,’ and that has negative implications to it. Environmental consequences, declining rural communities, struggling producers, huge mental health tolls on farmers, and all those implications are consequences of a cheap food regime that benefit many of us,” Fraser adds.

“If we simply say, food is too cheap, we live in this cheap food regime and we take [the food system] for granted, the solution to that is higher food prices. All that’s going to do is create food insecurity and poverty,” Fraser says. “It’s important to not create an equity problem while we’re trying to make people pay attention to food.”

“Maybe when we start reflecting on the lessons of this period of time, we should reflect on the fact that we are vulnerable to short term disruptions, and they are kind of scary,” Fraser says.

Fraser suggests that a higher degree of regional self-sufficiency and a little bit more inventory (versus a just-in-time supply chain) can help the Canadian food system buffer against short term disruptions. To clarify, Fraser notes a “higher degree of regional self-sufficiency” is not only buying local, all the time, but “having a level of productive capacity and key commodities at a regional scale.”

One area he noted that could see some regional investment was Canada’s processing sector.

“One of the consequences of global trade has been the loss of Ontario’s fruit and vegetable processing industry over the last 40 years,” Fraser starts. “Maybe this is a reason to think that we should be investing, as a society, back into our fruit and vegetable processing industry. Maybe we do need those canning factories, freezing factories, local smoothie maker, or whatever it is.”

Between 2006 and 2014, 143 Canadian food plants closed resulting in job losses of 23,807 roles, according to a report from the Canadian Agri-food Policy Institute (CAPI) and Ivey Business School about the changing face of food manufacturing in Canada. In that same period, 63 new plants opened and 67 companies announced major investments. In a more recent report from March 2020, CAPI shows that food manufacturing declined by four per cent over the 2009 to 2018 period in Canada.

Despite the decline, the 2020 CAPI report noted that there was some optimism for the food and beverage processing sector as Canadians are “demanding healthier, safer and more sustainable and high-quality food products” and companies are looking to reduce their environmental footprint.

At the time of the interview with Fraser, temporary foreign workers and seasonal agricultural workers were not exempt from Canada’s border closures. As of March 20, seasonal agricultural workers are exempt and will be allowed into Canada and required to self-isolate for 14 days. Their travel will be industry-led and details surrounding their arrival have yet to be released.

Fraser mentions that this isn’t the first time agriculture has experienced labour shortages and draws parallels between access to labour and technological innovation.

“California’s tomato industry went through a similar, very quick change of access to foreign labour in the 1970s, and that’s when they automated,” Fraser says. “So I can see a couple of historic situations where the shortage of labour led to major investments in automation and I don’t know if that’s going to play out again, but there is some history to learn from.”

“So I can see a couple of historic situations where the shortage of labour led to major investments in automation and I don’t know if that’s going to play out again, but there is some history to learn from.”

Fraser is referring to when the U.S. government closed the Bracero Program in 1964, which is a program that recruited Mexican migrants to work in U.S. agriculture. The closure would leave California growers without the man power to manually harvest tomatoes and speed up the development of harvesters. According to the book entitled Migration and Agriculture by Alessandra Corrado, Carlos de Castro, and Domenico Perrotta, the authors write that, “in 1963, 66 machines harvested 1.5 per cent of California’s tomato crops, but by 1970, 1,521 machines were harvesting 99.9 per cent.” In addition, between 1964 and 1972 the number of labourers dropped from 50,000 to 18,000. This is just one of the many examples throughout history where automation stemmed from labour access issues.

While this tidbit of history is interesting, automation is still happening today in California, with mixed results as the technology isn’t proving to be as efficient as humans.

At the end of the day a global pandemic such as COVID-19 will eventually pass, but will it cause a re-think of the food system as it stands to increase regional self-sufficiency and resilience in inventory?