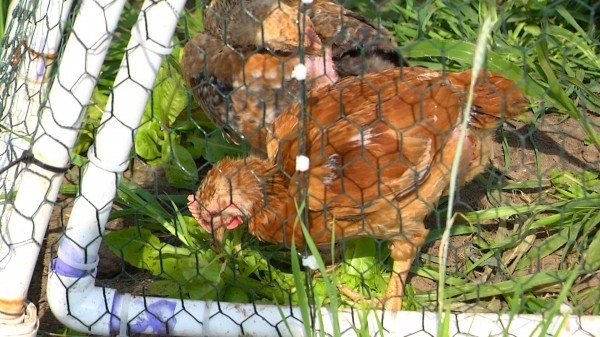 A chicken spends time inside a mobile coop on the ISU Horticulture Research Station. David Olson

Iowa State University researchers are conducting experiments to determine what advantages may arise from integrating chickens into vegetable production systems. The researchers must balance a range of concerns, including environmental sustainability, costs and food and animal safety. But Ajay Nair, an associate professor of horticulture and a vegetable production specialist for ISU Extension and Outreach, said finding ways to integrate vegetable and animal production may lead to greater efficiency and healthier soils.

The experiments, currently in their second year, take place at the ISU Horticulture Research Station just north of Ames. The researchers are testing what happens when a flock of broiler chickens lives on a vegetable field for part of the year.

The chickens forage on the plant matter left behind after the vegetables are harvested and fertilize the soil with manure. This integrated approach could reduce off-farm inputs and also provide producers with sustainable crop rotation options.

The researchers are testing three different systems on a half acre of land at the research farm. The first system involves a vegetable crop – one of several varieties of lettuce or broccoli – early in the growing season, followed by the chickens, which are then followed by a cover crop later in the year.

The second system involves the vegetable crop, followed by two months of a cover crop, with the chickens foraging on the land later in the year. The third system is vegetables followed by cover crops, with no chickens.

The experiment involves roughly 40 chickens, which live in four mobile coops that the researchers move every day. Moving the coops around ensures the chickens have access to fresh forage and keeps their manure from concentrating any particular part of the field. An electric fence surrounds the field to keep out predators.

Moriah Bilenky, a graduate assistant in horticulture, checks on the chickens every morning to make sure they have food and water. She also weighs them periodically to collect data on how efficiently they convert food into body mass. The researchers designed the trial to uphold animal health, and Bilenky said she keeps a detailed log on how foraging in the fields impacts the birds’ health and performance.

Nair said the researchers are looking at several facets associated with sustainability. Nitrogen and phosphorous deposited in the soil from the chicken manure could alleviate some of the need for fertilizer application, while working cover crops into the system can prevent the loss of nutrients into waterways. Economics must also factor into the research, he said.

“We might come up with results that really help the soil, but if the system is not economically stable, I doubt growers will be willing to adopt it because it has to work for their bottom line as well,” he said.

The trials also adhere to food safety regulations. For instance, all vegetables are harvested before the chickens are introduced to the fields, ensuring none of the produce is contaminated. The researchers consulted food safety and animal science experts at Iowa State while designing their experiments, and the work undergoes regular IACUC (Institutional Animal Care and Use Committee) inspection and documentation, he said.

The trials remain ongoing, so the researchers aren’t drawing any conclusions yet about the success of their integrated system. The project is currently supported through a SARE (Sustainable Agriculture Research and Education) grant. Nair said he’s seeking additional funding to investigate the animal health and integrated pest management aspects of this research.

So why did the chicken cross the road? It’s too early to tell, but maybe so it could get into the lettuce and pepper fields.