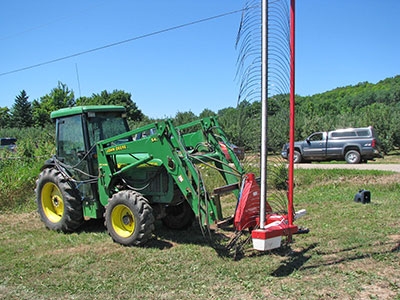 One of the projects being examined by the Comprehensive Automation for Specialty Crops group is mechanical blossom thinning without chemicals using machinery such as the Darwin Mechanical Blossom Thinner. Dan Woolley

Orchard management and harvesting hasn’t changed greatly in the past few decades but that is changing quickly.

“The orchard industry is one of the last industries to automate or mechanize,” said Matt Peters with N.M. Bartlett Inc., a Niagara, Ont.-based supplier of crop protection products and machinery.

Peters is on the advisory committee of the Comprehensive Automation for Specialty Crops (CASC) group, whose goal is to develop automation strategies and technologies for the specialty crop (tree fruit) industry. The organization is comprised engineers, scientists and extension specialists based at various universities, government officials, growers and industry representatives from five U.S. states. This area represents 70 per cent of U.S. apple production.

In 2008, the United States Department of Agriculture provided research funds to the tree fruit industry through the Specialty Crops Research Initiative (SCRI) program to match contributions

by industry, said Peters. The funding was to assist in establishing research partnerships to focus on efforts to improve production efficiency. Its $47 million in funding will end January 2014.

One of the funded projects is examining mechanical blossom thinning without chemicals and minimal hand labour. The CASC is looking at European technology, such as the Darwin Mechanical Blossom Thinner, which offers a saving in peaches of between $185 to $935, Peters said.

The Darwin thinner – when equipped with sensors and mounted on the back of a tractor – offers an additional saving of $63 to $135, he added, noting that N.M. Bartlett is starting to build and market the thinner for North America.

CASC, under the SCRI program, is also looking at crop intelligence, including pest monitoring, crop load scouting, stress and disease detection. As an example, the organization is studying an automated insect trap, the Z-trap, to identify pests, relay information to growers and crop consultants as well as destroying insects using pheromone lures to lure them into an electric coil, said Peters. He added it allows faster access to information than a scouting trap.

CASC is also reviewing vehicles that offer mobility and accurate positioning to assist in harvesting, including an autonomous prime mover that uses a laser, GPS and a camera to conduct routine tasks such as mowing, spraying, tree training and bin moving, plus a disease identification and prediction system equipped with micro-sensors for the orchard, he said.

European technology
“There are a lot things we can learn from Europe,” said Peters. “They have much higher costs than us, so they have thought through this shift.”

European scissor jack platforms such as Blosi or Orsi are self-leveling for up to a 20 degree slope and sensors will also keep them driving straight when in orchard rows, he said.

Peters stated the orchard platform will pay for itself within three years on lower labour costs.

Mechanical pruners mounted on the platform are being used with great success in Belgium, Germany and France, he said, observing that N.M. Bartlett is importing a German design to be built in Canada featuring a double knife blade mounted on a swing away arm with hydraulic controls to alter the angle of cut.

Peters said a mechanized blossom thinner can also be added to a platform.

N.M. Bartlett will also be introducing the Bin Dog, an autonomous vehicle that pushes up bins from the orchard to an unloading dock.

U.S. technology
Phil Brown Welding, based in Michigan, has designed and built for orchards, vineyards, greenhouses and nurseries. Phil Brown designed his machines in partnership with Pennsylvania State and Washington State Universities.

Brown has developed a three-wheeled tree trimmer/pruner and fruit harvester (the Brownie One), a self loading and unloading box handler that works with the harvester, a box shuttle, a blossom thinner, brush sweepers and pushers.

“We have had less bruising than with a picking bag and ladders,” claimed Brown.

The two pickers feed the apples into a vacuum hose on the platform which feed into a bin which can be filled in six to eight minutes, he said.

His orchard platform has auto-steering and auto-shift and it can be used for thinning and pruning by dismounting its vacuum picking system, said Brown. His latest platform costs about $80,000 and, to date, he has built 50 of them.

U.K. technology
Tim Biddlecombe of Fast Ltd., U.K.-based orchard consultants, added a lot of U.K. growers in the past five years have adopted the Dutch picking train system in which a tractor tows five to six coupled, wheeled bins down the rows to where they are to be filled.

He said it offers constant supervision, less bruising and bin bumping, less picker fatigue, less row rutting, less mud splashing, and reduces phytophthera; but it can be difficult to handle on steep slopes or side banks. It also requires more tractors and a large enough central collection point for unloading and there is more apple puncture in the bins, he observed.

Biddlecombe, however, noted one U.K. fruit farm estimated it saved 45,241 pounds in its first year on the bin train system in tractor fuel and a reduction in picking time from 26 to 16 days.

Smart sprayer
Andrew Bishop of Noggins Corner Farm in Greenwich, NS., is very pleased with his latest machinery purchase for his orchard.

In 2012, he began using a John Bean Smart Sprayer he bought from a supplier in Ontario. Since then, “it has been on the go constantly,” he said. “I quite like it. It makes the job much easier.”

With a tracking hitch between the tractor and the sprayer and crab steering on the tractor, Bishop said it is quite easy to handle in the orchard. As well, its ultra-sonic sensor system with five sensors mounted on either side of his tractor can tell the computer controller for the sprayer in the tractor cab the distance to the trees and their height.

Bishop said the sensors activate the nozzles on the sprayer’s boom arms through the on-board computer and he never has to stop and shut off the sprayer.

“It is a very sensitive system that gives very good coverage,” he said, noting that if he drove the tractor over 5.5 mph, the sprayer will shut off and he could also reduce drift by adjusting the fan speed on the spryer.

“It is fantastic for the environment and the cost saving,” said Bishop.

The Smart Sprayer has a 400 gallon capacity tank and a very low maintenance cost, he said.