January 11, 2021By Fruit and Vegetable staff 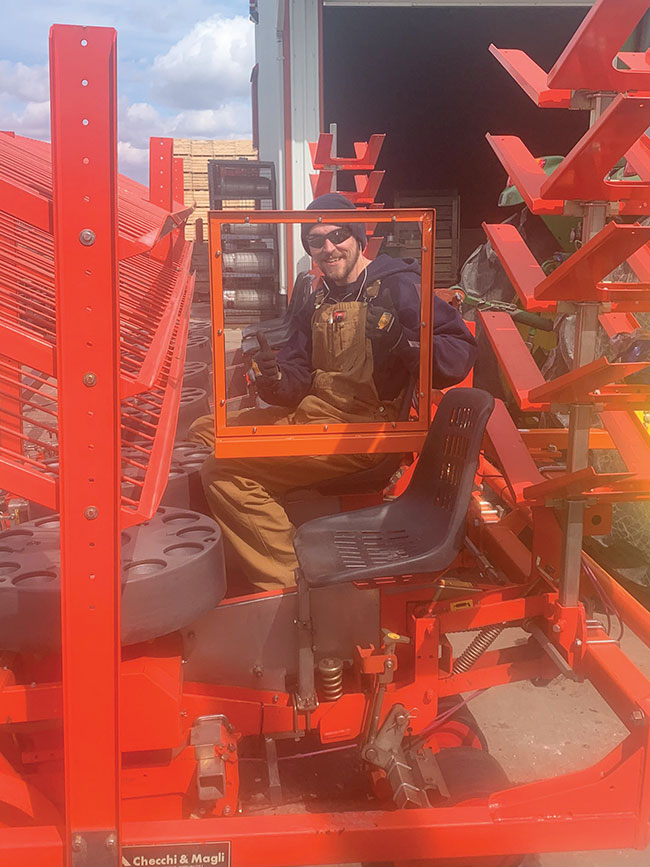 Bradley Van Luyk grows carrots, onions, parsnips and beets, in the Newmarket, Ont. area north of Toronto also known as the Holland Marsh. One of Van Luyk’s cousins started working for the farm after being laid off from his job at a glass company due to COVID-19.

“It was his idea that we do something with the Plexiglass,” Van Luyk said.

The idea grew from there. Van Luyk, his cousin James leuhr Grima, his dad Doug Van Luyk, and other cousin Zach Van Luyk, all were involved and offered input as well. His dad designed a prototype, Van Luyk took care of welding and fabrication, and his cousins handled the glass work. The glass work involved drilling holes through the ½ inch Plexiglass, which was then bolted onto a steel frame similar to a window. The end result was a moveable Plexiglass protector that goes in between each seat on an onion transplanter.

They made seven glass protectors, one for each side of their six-seat Checchi e Magli onion transplantor. It took the team 50 to 60 hours to complete the project and the design didn’t require much tweaking. “[On the] first try it worked,” Van Luyk said.

The glass adds an extra layer of protection for workers planting using the onion transplanter where the recommended two-metre distancing rule would be hard to follow. Van Luyk talked about how there was some talk about having everyone wear masks, but then the glass protector idea took off.

The shields aren’t permanently fixed onto the transplanter and move to allow workers in and out. “Between each guy it slips open so that they can get in and out of the machine nicely,” Van Luyk explained. “On each divider with a Plexiglass, there’s two u-bolts that bolt onto the transplantor, so it’s very easy for the [Plexiglass protector] to come off.”

“Let’s say next year there’s not this problem, it will take 15 minutes to take off,” Van Luyk said, adding that he hopes that it’s only for this year. “Our plan is to use it for this year but if the guys like it for windbreakers and all that stuff we’ll keep it on there.”