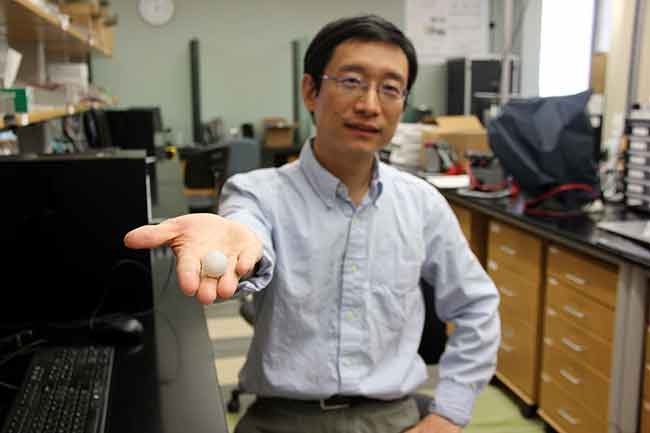 Changying “Charlie” Li – an associate professor in engineering at the University of Georgia – holds up the Berry Impact Recording Device (BIRD), which he created. The off-white ball rides along with the berries in the plant while its electronic chip records the bumps and bruises inflicted on the fruit. Photo by Mike Wooten/UGA

Since a blueberry is mostly water, any touch has the potential to bruise it. While most human pickers are gentle enough to pick the berries without bruising them, the same cannot be said for mechanical pickers.

Bruising is almost guaranteed when berries drop more than 30 cm onto a hard surface, generally the case on today’s picking machines. As more growers turn to machine picking to offset the increasing cost and decreasing availability of labour, bruising has become more of an issue.

Researchers have developed a new BIRD (blueberry impact recording device) sensor to more accurately measure bruising in mechanical pickers and on packing lines. Roughly the size and shape of a blueberry, the BIRD weighs about six grams and can be dropped in a machine just like a blueberry.

“It’s very good at measuring impact,” says U.S. Department of Agriculture research horticulturist Fumiomi Takeda, who is based at the Appalachian Fruit Station in West Virginia.

The BIRD has shown that no two packing lines are the same and has pinpointed transition points as creating the most impacts. Even if each impact is small, the cumulative effect of multiple impacts is enough to create bruising and reduce overall fruit quality.

While the BIRD sensed little damage in hand harvesting, it found severe impacts in picking machines, particularly from the catch plates.

Even if bruises aren’t apparent to the naked eye, they exist, Takeda told growers and packers at the recent Pacific Agriculture Show in Abbotsford, B.C.

“Ten per cent of the [machine-picked] fruit you put into cold storage is damaged.”

Primary ways to lessen bruising are to develop a firmer berry that can stand up to machine picking or to build a picking machine that can handle berries more delicately. Berry breeders, researchers and engineers are working on both options.

Success is still a long way away. The commercial release of a new variety can take up to 15 years and the B.C. blueberry breeding program is in its ninth year. Even if Dossett releases a new variety in the next six years, there is no indication his earliest selections have the firmness growers want and need.

Takeda says engineers are making some headway, noting they have created a new catcher plate design that “virtually eliminates bruising.”

Another promising design picks from the top using angled rotors and drops the berries onto a soft surface.

“It has the same fruit quality as hand harvesting,” Takeda says.

Researchers have also tried a walk-a-long unit (not much improvement) and a semi-mechanical machine with multiple shakers to eliminate some of the mechanical movement.

Last year, Naturipe Farms – one of the world’s leading blueberry growers and marketers – issued the Blue Challenge, inviting “innovators, developers and technology integrators to help transform the way we will harvest blueberries in the future.”

It has promised $10,000 and a joint development agreement for up to five semi-finalists, which were selected in January and February. The first person to deliver a working prototype with a demonstrable ability to be a viable commercial automated system will receive a $200,000 prize.

While they await a winner, Takeda says one thing growers can do is pad their catch plates so berries don’t drop straight onto hard plastic. Packers should also consider rejigging their lines to reduce the number of transition points.