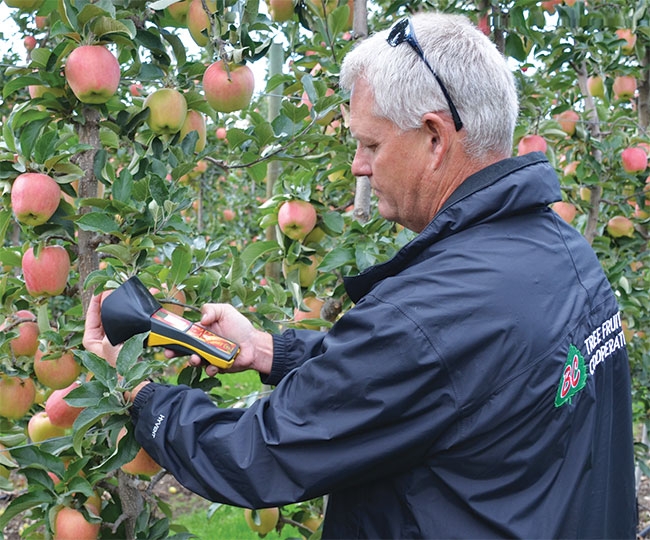 There is nothing like a just picked, tree-ripened apple. At a BC Tree Fruits (BCTF) field day last fall, I was offered a Honeycrisp the size of a grapefruit. It was the first one I had tried and it lived up to its reputation.

But now, I wonder if I will I ever buy a Honeycrisp later in the winter and risk being disappointed
that it won’t be as good as that tree-ripened beauty?

Dr. Peter Toivonen, a postharvest specialist with Agriculture and Agri-Food Canada (AAFC) in Summerland, B.C., works on this problem a lot.

“That’s really our challenge,” he says. “To have apples come out of storage and be as good as that one you had back in the fall.

“If the consumer is happy with the apple that means the packing house has done a good job holding it in storage. And that leads to a better price for the grower.”

There’s a lot of science behind knowing the perfect time to harvest an apple that will be going into storage and AAFC researchers in B.C. and Nova Scotia have turned to a new piece of technology – the DA meter – to help them with the job.

The hand-held, Italian-made device shines LED light into the apple and a sensor measures how much light reflects back out – the Delta Absorbance or DA – which tells the level of chlorophyll that is in the apple peel.

“Chlorophyll concentration is an indicator of how ripe the apple is inside,” Dr. Toivonen says. “It doesn’t matter what colour the apple is, the DA meter only measures the chlorophyll.”

The instrument is portable, easy to use, reliable, and, according to Dr. Toivonen’s data, an excellent predictor of how well an apple performs during long-term storage.

“That’s what the packing house wants to know,” he says. “Are these apples going to hold up? They don’t want to find out in February that the apples are starting to break down.”

Dr. Toivonen says the DA meter tells the physiological age of the fruit. Harvest the fruit too early and it will come out of storage green and hard as a bullet. Harvest it too late and it will be mushy.

Dr. Toivonen works mostly with Ambrosia, while his colleague Dr. John DeLong, based in Kentville, N.S, studies Honeycrisp. Optimum storage is essential for these high-value varieties.

“It is important to preserve those superlative qualities, that’s why people are buying those apples,” Dr. Toivonen says. “They are not commodity apples, they are premium apples.”

The current industry standard measure of maturity – the starch test – can be problematic. It takes time, the apples are destroyed in the process, and it can also be a subjective measure.

“After a while it can be like looking a Rorschach blots,” Dr. Toivonen says, referring to the ink smudge test. “Each person sees a different thing, while the DA meter gives you a number in real time”

And the starch test is not always accurate.

“In our studies in the last six years with Ambrosia specifically, we are finding that some years, particularly with warmer nights or cooler days in the fall, the starch value may not be a good indicator of storage quality,” Dr. Toivonen says.

The DA meter was originally developed in Italy to test the ripeness of peaches. Dr. Toivonen installed a shroud that blocks out surrounding light for a more accurate reading (now a standard practice for all users), developed in-field protocols for testing, and, over the last six years, has collected data to validate the instrument’s accuracy.

“I don’t want to tell growers to use this, until we know that it works every time.”

And it does work, says Dr. Toivonen. His six years of data show a 90 per cent correlation between DA meter readings and performance in storage (the resulting eating quality and firmness of the apple).

“Time and time again, it has told us the right thing,” he says.

After an initial calibration in the orchard, individual apples are scanned on their sides at a spot out of direct sunlight and without discoloration due to sunburn.

“You want an apple at mid canopy height,” Dr. Toivonen adds. “Not right outside of the canopy but not in too much shade either.”

Twenty-five apples are sampled and the DA meter computes an average.

It’s so quick that a grower can sample different microclimates in his/her orchard. The farmer can take an average reading at the top of the hill and then go down to the bottom and take another sample.

Ambrosia has an average picking window of 10 days but some years that can be as short as five days.

“You have to be on your feet and the DA meter allows you to make decisions faster,” Dr. Toivonen says. “You can sample multiple trees across your orchard. Eventually we hope to be able to map the orchard and help the grower decide where he can start harvesting.”

Dr. John DeLong’s apple research mostly involves Honeycrisp, an apple that has a number of challenges in storage.

“Honeycrisp has not been an easy cultivar to grow or put into CA storage,” Dr. DeLong says.

But that practice may actually increase the risk of bitter pit.

Dr. DeLong says that bitter pit and soft scald can appear in stored Honeycrisp that was harvested too early and went into cold storage when it was less than optimally mature. Senescent breakdown on the other hand, can appear on fruit that was too mature going into storage.

The DA meter acts as a proxy, Dr. DeLong points out.

“It tracks the decline in chlorophyll in the apple,” he says. “That’s fine and dandy but we had to line up the conventional maturity data to find out what a reading of 0.75 or 0.3 meant for long term storage.”

He now has three years of extensive data collection.

What we are finding with Honeycrisp is that there is a sweet zone, Dr. DeLong says. “A harvest window with two bookends that helps us know when to begin harvest and when to end harvest for long term storage.”

But Honeycrisp can show extensive variation in maturity across a block, or even a tree.

“It’s frustrating. You can look at 100 fruit and some will be early and some will be late,” cautions Dr. DeLong. “That means a grower will have at least two picks but more likely three or four and you will need to spend time educating the pickers on what to look for.”

“If this work can help us bring these apples out of storage and have them taste like they were just picked, we have a chance of growing the apple market,” Dr. Toivonen concludes.