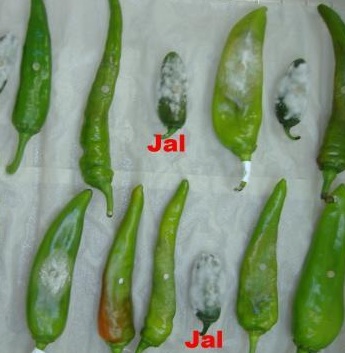 A study published in the October 2008 issue of HortScience by the research team of Mohammed B. Tahboub (postdoctoral researcher), Soumaila Sanogo (plant pathologist and team leader), Paul W. Bosland (chile pepper breeder), and Leigh Murray (statistician) set out to determine whether or not the severity of Phytophthora blight would be greater in low-heat than in hot chile peppers.

Chile pepper fruit become infected during prolonged periods of heavy rain and high humidity in flooded and poorly drained fields. Prior to this study, there had been no systematic assessment of the relationship of chile pepper heat level to chile pepper response to Phytophthora capsici. If such a connection could be found, information might have been revealed that would assist breeding programs intended for developing disease-resistant cultivars of pepper.

Based on documented field observations in New Mexico, Arizona, and South Carolina, the researchers hypothesized that peppers that produce high-heat fruits would be more resistant to Phytophthora blight than low-heat varieties. The study was conducted by observing infection on both the root and fruit of different varieties of peppers included.

The results of the study concluded, however, that there was no relationship between the heat level of the pepper and the plant’s resistance to Phytophthora blight. For example, while the disease was slowest to develop on the roots of one variety of jalapeño, it was quickest to develop on the fruit of the same plant.

The results of this study indicate that factors other than heat level may be involved in fruit response to Phytophthora capsici. Genetic differences and cuticle thickness of the plants and fruits are among other issues that could be relevant, but further study is warranted.