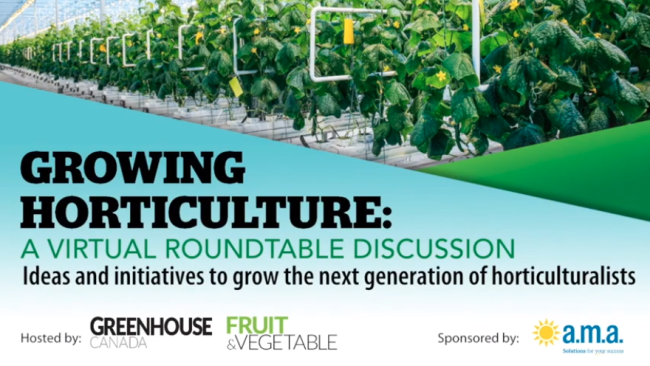 Staffing shortages in horticulture are not a new problem, and the issue is not expected to get any better without addressing the root causes at an industry-wide level.

According to the Canadian Agricultural Human Resources Council (CAHRC), labour shortages in 2018 cost the greenhouse sector more than $100 million; the field fruit and vegetable growing sector took a hit to the tune of more than $400 million, and tree fruit and vine sector lost $94 million.

By 2029, the CAHRC predicts the domestic labour gap to be higher than 50 per cent across these three sectors. In 2018, surveyed growers already reported that 26 per cent of advertised positions did not receive any Canadian applicants. The COVID-19 pandemic has exacerbated these issues in the short-term, and will likely worsen the long-term consequences too.

With greater demand for fresh, local produce and ornamental plants, what can be done? How will the horticulture sector succeed in attracting – and keeping – qualified workers?

Just as there’s no silver bullet for any issues in agriculture, solutions to the labour shortage are far from simple. But change has to start somewhere, which is why Greenhouse Canada and Fruit & Vegetable sought to start the conversation. In September, Greenhouse Canada editor Greta Chiu and Fruit & Vegetable associate editor Alex Barnard hosted a panel discussion to break down  the challenges, successes and trends in labour attraction and retention observed by a panel of growers, educators and industry representatives.

The roundtable speakers consisted of:

Chiu and Barnard asked panelists about challenges and barriers they’ve encountered or observed in hiring, training and keeping employees, the qualities they each look for in the hiring process, their thoughts on what  the future holds for the horticulture sector and how the industry can collaborate to improve the labour situation.

Dusty Zamecnik is a fourth-generation farmer, growing highbush blueberries and greenhouse strawberry plants. EZ Grow Farms has 20 full-time employees, but in peak season they employ 380 to 400 people, including temporary foreign workers (TFWs) and local labour. He estimates his labour force to be approximately 60 per cent TFWs through the Seasonal Agricultural Worker Program (SAWP), five per cent local residents, and 15 per cent members of local Mexican Mennonite communities.

Stephanie Slaman is also part of a multi-generation farming operation as the third generation to manage Slaman’s Quality Flowers, selling cut floriculture products year-round for the North American markets. While the greenhouse operation is also reliant on SAWP, Slaman says it makes up a smaller amount of the overall workforce, with six TFWs (around 30 per cent of the total workers). As the greenhouse operates 12 months of the year, they have TFWs supporting their labour needs almost year-round, operating on six- to eight-month rotating contracts. Local workers fill about 20 full-time positions, with five-to-10 part-time student workers rounding out their team.

Slaman notes the importance in shifting perceptions of careers in agriculture and highlighting the full-time, long-term careers available. “It always breaks my heart when people see ag as a starting point to get to somewhere else, especially if they’re bringing that science background,” she says. “Critical and analytical thinking skills, the science framework for hypothesis testing – we need those skill sets in agriculture. We’re seeing dramatic changes and new challenges, and incredibly complex challenges.”

Laura Bryce has been teaching the next generation of horticulturalists at Kwantlen Polytechnic University for the past six years, with her speciality being protected cultivation of production horticulture (floriculture and vegetables). The university’s horticulture department offers a variety of diploma and certificate programs, as well as degree programs in plant health and urban ecosystems. Bryce says enrollment numbers are dependent on the specific program stream, but estimates that each of the department’s specializations has 30 full-time students at any given time.

Something Bryce notes as very important to the current crop of students is sustainability and awareness of environmental impact. “I see students’ disdain for a relatively high use of plastics in our industry; I see them wanting to work at a place that adopts IPM (integrated pest management),” she says. “They have values that they want [from] this career that they’re going to take on, [so] that it feels aligned to them.”

The horticulture program at Olds College was created more than 60 years ago, and in its prime during the 1990s, the program saw 120 students per program year. Kim Wickwire says this wasn’t sustainable, but that horticulture is coming back as “the sexy thing to do,” with the department having more students than any other at the college and a waitlist of students eager to learn. She notes the students who are drawn to horticulture have changed in the past seven to 10 years, saying they’re more focused on food security and sustainable practices. However, she fears some students might be overly idealistic and have an unrealistic, financially unsustainable idea of farming and horticulture from popular media.

Niki Bennett sees OGVG’s role as one of advocating for the ag sector, drawing in people who are young or unfamiliar with agriculture and specifically trying to fill the sector’s needs that aren’t met through SAWP. Similar to the two growers on the panel, Bennett says OGVG has also struggled to attract local – especially young – Canadians to agriculture, finding that established impressions of what modern agriculture is are very different from the reality.

“Farms are busy, dynamic, modern places. They’re not quiet, they’re not slow-moving – they’re super busy and lots of things are happening, and they’re growing and changing at an increasingly rapid pace,” she says. One major challenge she’s observed in her seven years with OGVG is how much the complexity of growers’ needs has grown. While many growers recognize they need help, they are unsure where to begin. Bennett says OGVG has found itself in a consultant-like role,  helping growers determine which solutions will actually help their unique situation and providing a “sober second thought” on topics like automation.

Tania Humphrey directly manages and oversees all of Vineland’s scientists, engineers and technical staff – which, as an independent, industry-focused research institute with a view of creating products and processes the industry can use, means a large part of Vineland’s 100 employees are under her purview. Their difficulty in staffing comes from the wide diversity of research projects and crops covered at Vineland. There isn’t as much overlap in duties as there might be for many growers, and Humphrey says they’re constantly hiring at all experience and task levels. Humphrey notes they’re also involved in labour issues from the grower side, as Vineland is often involved in research projects that help growers deal with labour shortages through automation or improving process efficiency.

For more insights from our panellists, be sure to watch the roundtable series, available in full or broken down into four parts:

How have you recruited and retained new employees? Share your thoughts, best practices and bold ideas with us on social media. Join the conversation on social using #GrowingHort.