It’s time for producers to manage for average production above 40 bins to the acre of apples and grow fruit production potential in B.C., even if it means pulling out old varieties and replanting new 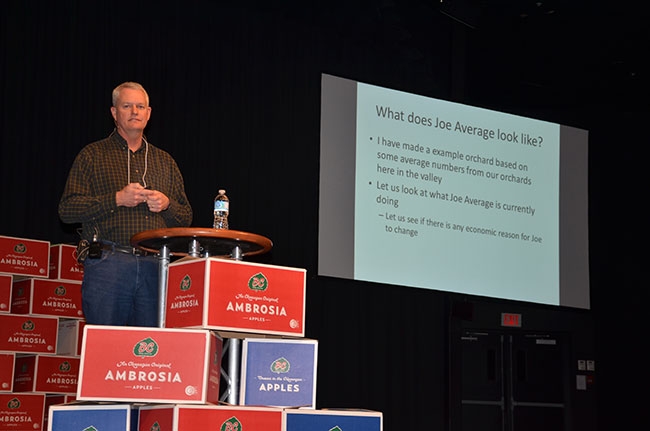 Planning not to replant is planning to get out of business, according to Hank Markgraf, grower services manager at the B.C. Tree Fruits Co-operative. Photo by Tom Walker

Planning not to replant is planning to get out of business, according to Hank Markgraf, grower services manager at the B.C. Tree Fruits Co-operative.

He spoke to producers at their annual horticulture symposium in February about increasing production potential in B.C. apple orchards. He described a hypothetical “Joe Average” grower and gave some strategies for improving grower returns.

“In my position, I have the opportunity to travel to other orchard regions in the world,” says Markgraf, who is also a second-generation Kelowna fruit grower. “They are starting to move their averages up, but we (in the Okanagan) are not doing that.

“This has become a bit of a pet project of mine. I’m going to talk about apples … but you could apply the same analysis to an orchard of pears or cherries.”

Back in the 1970s, the talk around the Markgraf family table was to get 40 bins of apples to the acre.

“That’s what Washington State was getting and we wanted to get that too,” he says. “My dad planted MacIntosh at 15 by 15 [foot] spacing. He worked hard, got 40 bins to the acre, and received the Golden Apple Award.”

The problem, Markgraf says, is that the average grower in the Okanagan has not moved much above that level.

“When I look at the B.C. Tree Fruits Co-operative data, which includes 85 per cent of the growers in the province, the average production today is 38 bins to the acre,” he says. “That’s not 1970, that’s today.

“When it comes to math, averages are just averages, but we do have the potential to increase. We need to be above 40, and a realistic target is 60 to 70 bins per acre. Despite our northern climate, we have lots of examples of 80, 90, 100 bins to the acre that we can drive to right here in the Pacific Northwest. People are willing to share their expertise and there is lots of help available.”

“Joe Average” grower in the Okanagan valley has an 11.5-acre farm, says Markgraf. When you take out the footprint of his house, driveway and shed, he has 10 acres in production. Joe has done some replanting, but he is still working at converting over to high-density plantings.

This average orchard gets 45 bins to the acre for Galas and Ambrosia but the Spartans, that were likely planted in the 1950s, and the Macintosh only bring 25 bins to the acre with 30 bins for the Red Delicious.

But it’s not that simple, according to Markgraf, adding it’s important to look at Joe’s profit or loss per acre.

“Of course, Joe has costs,” he says. “He has to spray and prune and pick.”

“The last time I checked, the poverty line in Canada was around $24,000,” Markgraf quips.

The typical Okanagan grower is 52.5 years of age. He may have 12 years left to go before retirement but he’s probably more wary of going into more debt.

“I know replanting is expensive, but so is losing money every year,” Markgraf says. “And you don’t have to do it all at once.”

But Joe doesn’t have much extra to put into replant and that will also take five to 10 per cent of his orchard out of production for a good three years.

“Let’s increase production with the trees he has,” Markgraf suggests.

If Joe can just get more bins per acre – say 50 bins for the Macs, Spartans and Reds and 65 for the Galas and Ambrosia – with the same quality and the same price, his gross return can climb to $105,000. Considering input costs will go up  – he will need to prune and fertilize more – with this average of nearly 60 bins per acre, he’ll see a net profit of $59,750.

“But he still lost $50 on his crop of Reds,” Markgraf says. “Why would you wear out your tractor and wear out yourself growing Reds?”

Joe is now in a financial position to do things. He can buy a new tractor, he can buy new trees, he can buy an automated irrigation system or he can buy the more expensive fertilizer and save himself some time.

“You have a grant program to help with replant,” Markgraf points out. “If he did nothing else but pull out the Reds and an acre of Spartans and put in 1.5 acres of HoneyCrisp and manage 50 bins per acre at 41 cents a pound, in four years, Joe’s net return would be $76,460.”

Markgraf has a strategy to help growers increase their production.

“Loose the heavy wood,” he says. “We are not in the lumber business.

“If you are going to go from 40 to 60 bins and acre you need to look at your nutrient management program,” he adds. “More apples use up more energy and you need both ground and foliar management. You need to be replacing your calcium and your phosphorus.”

Bees are a grower’s friends, says Markgraf. At a minimum, at least one hive is needed per acre. The fruit should also be chemically and hand thinned and then counted on the trees.

The grower also has to get them off the tree in a timely manner.

Growers need to learn drive their business, not let the business drive them, Markgraf says.

“This is not a one year fix for an orchard,” he concludes. “You need to plan for that five to 10 per cent renewal every year. That may go into Ambrosia, it may go into Cosmic Crisp, it may be variety XYZ but you are always looking to improve. You need to analyze the returns for each block or each variety every year. And you need to be honest with yourself when you see the true numbers.”