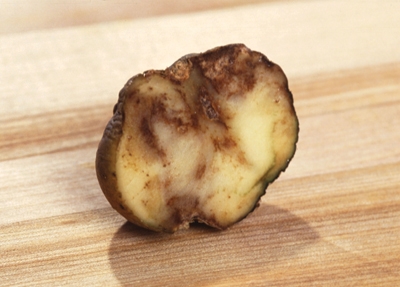 On the tuber late blight appears as a brown mark the size of a quarter but can be difficult to spot, especially in russets.

Dr. Gary Secor recommends that potato growers check their fields early and often for late blight this coming season, noting that late blight first appeared in a Manitoba field on June 30 in 2010.

“That it was detected that early was big news,” says the professor of plant pathology at North Dakota State University. “That was the earliest sign of late blight since 1994 in this region. It was widespread in eastern North Dakota and southern Manitoba.”

Late blight can infiltrate potatoes at any stage of development. Signs of the disease include spoliation on bottom leaves or the stem or lesions on the top of the leaves. In the seed, late blight appears as a brown mark the size of a quarter but can be difficult to spot, especially in russets, Dr. Secor says.

He notes that some of the blight found last year was of a new genotype – introduced perhaps from Mexico – or genetic a recombination that was first detected in Manitoba and North Dakota in 2009.

Dr. Secor adds that late blight can only survive in living potato tissues, be they seeds, volunteers or cull piles. “They could be wintering in volunteers this year because we have had so much snow this winter,” he says.

Alternative hosts include tomatoes (the cause of the 2009 outbreak), hairy nightshade and petunias.

When the host dies, so does the blight – except for the zoospores, a product of the mating of A1 and A2 strains that can survive the winter and cause blight even earlier. “We haven’t seen any zoospores in Canada yet,” he says, “but the latest epidemic in 2009 in Ontario may be a precursor.

“It is important that producers become educated about late blight,” Dr. Secor says.

He recommends a number of measures growers can adopt to control late blight. These include removing infected seed
potatoes and cull piles, destroying volunteers and using crop rotation.  Potatoes should be stored in cool, dry conditions, he says. He suggests using fungicides if blight is present and that is your only option.

Mancozeb is the only fungicide for treating the seed and preventing late blight from spreading at the cutting stage, he says. Mancozeb and Chlorothalonil should be applied early on – with specialty fungicides added later, he adds.

Dr, Secor recommends Curzate if blight appears early. Curzate should be applied once the plant has emerged and is three to six inches tall. Curzate is effective for three days, fighting new infections and destroying existing late blight. There should be a follow-up application seven days later before the rows close.

He notes that if late blight is in the area, Curzate can also be used after a storm to stop new infections due to a spore shower.

Previcur should also be used early in the season during periods of fast growth when it is too wet or cloudy to spray, Dr. Secor advises. He describes Acrobat as an anti-sporulant that slows the spread of epidemics, whereas Gavel can be effective at season’s end in reducing tuber infection. Omega, Tin and Ranman can also reduce tuber infection late in the season, he says, adding Revus Top can be applied anytime.

He recommends against using Ridomil – which is meeting with widespread resistance – and copper during the season (although, he noted, copper can be used at vine-kill to reduce tuber infection).

The more comprehensive the coverage, the better the control, Dr. Secor says. No areas should be left untreated. If you are applying ground coverage, water volumes should be 20 to 25 gallons per acre, he says.

“There is little advantage to higher volumes.”

He adds that you should use an extended range flat fan or hollow cone nozzle to apply and to avoid flood jets. “Use the pressure recommended for the nozzle,” he says.

For aerial applications, he recommends using a water volume of five gallons per acre. “Avoid strips or alternate spray patterns,” he says. “Also use ground applications to touch up edges or ground obstacles such as pivots, power lines or shelterbelts.”
Dr. Secor cautions that combating late blight is a communal responsibility. “Don’t try to hide it,” he advises. “Talk to your neighbours. Educate them. Talk to the seed sellers.

“Manitoba and North Dakota also need to work together to prepare a common strategy for dealing with late blight in 2011.” ❦