A berry grower in B.C. is partnering with automated ag tech companies to pick up the slack left by the widespread agricultural labour shortage. 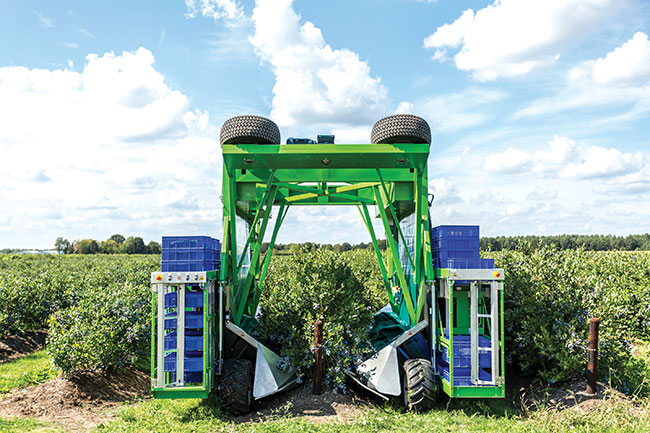 The pandemic of the past year has accelerated the use of contactless systems in many sectors. But in agriculture, the labour shortage was pushing systems that didn’t require direct human contact long before it became mainstream.

The Canadian Agricultural Human Resources Council (CAHRC) has forecast a shortfall in the domestic workforce of 123,000 nationwide by 2029, with horticulture hit hardest. In Ontario, the shortfall will be 47,300 domestic workers, 8,500 of which will be in the field fruit and vegetable sector. For British Columbia, the demand is less, at 15,200 workers overall and 1,800 within the field fruit and vegetable sector.

While foreign labour is one option, international travel restrictions over the past year have shown how vulnerable that labour pool is. A variety of factors also make it more costly, including increases to minimum wage in both provinces. B.C. will increase its minimum wage to $15.20 per hour on June 1, with piece rates expected to keep pace. Ontario increased its minimum wage to $14.25 per hour in October 2020.

Rising labour costs bite, even when the harvest is as good as it was on B.C. blueberry farms in 2019, when growers brought in a record harvest of 189 million pounds (lb.).

But when Dean Maerz, operations manager at Klaassen Farms Ltd. in Chilliwack, B.C., crunched his numbers at the end of the year, he found labour costs for the 50 to 60 workers he hires each year to bring in the crop from the farm’s 90 acres of fields were inconsistent with the rest of his budget.

“I realised that I had to do something,” he says.

The farm had an Oxbo mechanical harvester, but Maerz wanted to see what else was out there. A global search led him to  Finefield, a three-year-old company in the Netherlands. Its initial product, the Harvy 200, was a platform for hand-harvesters. However, it was preparing for field trials of the Harvy 500, an autonomous harvester.

“This was markedly different,” Maerz says. He imported four of the 200-series machines last summer and was impressed with the results. The platforms allowed him to harvest his crop with just 16 people and no compromise in quality.

Maerz is excited by the prospect of the new autonomous picker, which he’ll receive this summer. Unlike other mechanical harvesters, it’s been designed with blueberries in mind, gently brushing them into lugs with no ground-drop. (Maerz estimates conventional mechanical harvesters drop 15-20 per cent of the crop.)

“It’s one drop. They’re dropping onto really soft brushes and they’re rolling directly into the lug, so the product is comparable to the hand-picked product,” Maerz says.

Moreover, the Harvy 500 is solar-powered, eliminating recharging time, and autonomous, slashing labour costs. It could pay for itself within three years.

Klaassen Farms is confident enough in the product that it has partnered with Finefield to distribute the machines in North America. It sold 30 of the Harvy 200 machines to growers in the Fraser Valley in 2020 and will be importing one of the Harvy 500 machines for use in the U.S. Northwest this summer.

“It’s going to boost the profile of the B.C. blueberry industry,” Maerz says. “It’s a game-changer.”

The system is also suited to raspberries.

Meanwhile, an autonomous strawberry harvester is approaching commercialization at Neupeak Robotics in Vancouver. Ongoing field trials are setting the stage for the commercial release of the Pixaberry, which uses imaging technology to guide a robotic arm that gently transfers ripe berries from the stem to a lug that can hold 40 lb. of fruit. The harvester collects approximately 30 lb. of fruit per hour – about 75 per cent of the rate of a hand harvester, but with less damage.

But if robots can help reduce labour demands at harvest, they’re also proving their worth during the production process. Automated systems are a way to achieve intensive management without high labour costs.

This is where Eleos Robotics Inc. of Surrey, B.C., has identified a niche. Eleos is working with 40 different farms, primarily berry and grape producers, on an autonomous weeder that enters field trials this spring.

Known as the Roboweeder, the device cruises plant rows, identifies weeds and zaps them with microwaves. Eleos CEO Yahoel Van Essen was inspired to pursue the project in 2016, after hearing growers in France sound off about their challenges.

“I knew just enough to have this crazy idea of a robot,” he says. “Not only did we create this way to have our robot do the weeding … but on top of that we unintentionally ended up creating a new cultivation method.”

The initial prototype used a laser to zap bugs and weeds, but the system was complex and required a high degree of precision. Microwaves have a broader margin of error better suited to weeds, which some organic growers control through spot burns. The autonomous RoboWeeder uses image recognition to identify the woody stems of perennials and the soil (“kill zone”), and zaps the weed’s green shoots.

Backed by investors, including grower Jason Smith of Fraser Berry Farms Ltd. in Abbotsford, B.C., Van Essen is confident Eleos has developed the only weeder that’s fully autonomous and eco-friendly. The company has sought patents for various components, including the precision microwave technology employed.

“We’re really trying to build something that’s turnkey because we just won’t get that kind of adoption if farmers have to be too techie,” Van Essen says. “We drop it off on the farm and it’s ready to go. You could set it up in half an hour. The only thing the farmer needs to do is plug it in and charge it.”

Commercial production of the RoboWeeder won’t begin until 2022 at the earliest, Van Essen says. He wants a full year of field trials under his belt to ensure any maintenance issues are identified. When it is available, he says the cost will be competitive with growers’ current weed management costs.

“Our goal is to offer it below or equal to their existing weeding cost per acre,” he says. “What we’re trying to do is create a turnkey technology that makes our agricultural value chain less dependent on labour, especially foreign labour.”

Mike Manion of Agrisco Supplies Corp. is an advisor to several Fraser Valley agritech companies, including Eleos. To him, both the shortage of domestic labour and the difficulties in accessing temporary foreign workers in 2020 underscore how technology can help local growers.

A growing emphasis on agritech in B.C., which rates highly in national tech sector rankings for creativity and collaboration, means a growing number of options are emerging locally.

“B.C. farmers believe that, when looking for innovation, they need to look to Europe for solutions,” Manion says. “However, this is no longer necessary. We have companies in B.C. that have demonstrated their ability to develop world-class technology right here and create excellent long-term jobs for our province. Farmers should investigate local first. They will be pleasantly surprised.” •