Features Vegetables
Greenhouse Grower of the Year: On the cutting edge

An entrepreneur, visionary and dedicated member of the community, Bert Mucci’s aspirations and achievements inspire not only his employees but the industry as a whole. 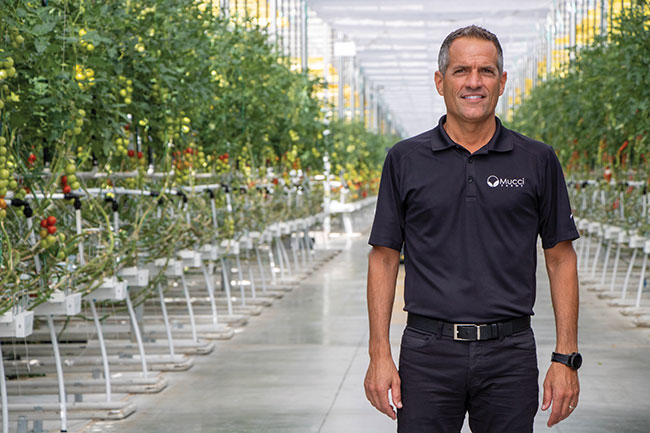 This story was first published on Greenhouse Canada, read it here.

The spirit and passion of this year’s Grower of the Year award winner is undeniable. Under the direction of chief executive officer Bert Mucci, Mucci Farms has become one of North America’s leading fresh produce providers, not to mention one of the most progressive.

“It all started in the mid-to-late 60s when my parents immigrated from Italy – they started Mucci Farms,” says Mucci. Already involved in the greenhouse at a young age, Mucci knew what his passion was in life and never looked back. Setting up his own greenhouse at the age of 18, Mucci began with one acre that quickly become three, and annual expansions soon followed. Today, Mucci Farms operates over 250 acres filled with greenhouse tomato, pepper, cucumber, eggplant, lettuce and strawberry. While the vast majority are located in Kingsville, Ontario, a tenth of their acres reside across Lake Erie in Huron, Ohio – a range that has continued to expand since its initial construction in 2017.

At the forefront of innovation

Visitors invited to any one of Mucci’s greenhouses will be struck by the level of automation and technology being deployed. With ongoing labour shortages in the horticultural sector, Mucci has made sizeable investments that have dramatically improved efficiencies as well as produce shelf-life.

“Packaging is one of the most labour intensive [tasks], especially with specialty packs. It takes a lot of people to get these products out the door,” he says. While heavy, laborious duties such as palletizing and lifting have been largely automated in many greenhouse operations, Mucci has continued to search for sophisticated solutions to repetitive tasks. One of their key projects in recent years was an automated mini cucumber packaging line. “There are about 22 people that used to pack there…and now there are only two people manning those robotics.”

In 2016, Mucci partnered with Viscon Industries to become the first North American grower to install a fully automated, deep water system for hydroponic lettuce production. Without local knowledge to rely on, Mucci and his team had to trial and error every single detail of the system, but it was a welcome challenge. “It was a huge learning curve…and we are still learning with it every day.” Growing and harvesting 365 days a year, Mucci estimates that they produce 10 to 15 times more than the capacity of field lettuce production – and without a single human being in the greenhouse. “The only people you have there is in packaging,” he says.

Around the same time, Mucci partnered with Dutch growers Ton Bastiaansen and Joost van Oers to build the largest indoor strawberry farm in North America. “Currently at 36 acres, plans are already in place to double the acreage within the next year,” reveals Mucci Farms’ public relations and digital marketing manager, Ajit Saxena. “Propagation and trial programs happen on site, and the farm is equipped with swing gutters and a two-tier hoist system to maximize production and control over the growing process.”

Furthering their commitment to the environment and to their customers, Mucci Farms introduced their paper top seal this year. Recognized by the Canadian Produce Marketing Association’s (CPMA) award for Packaging Innovation, the new, more environmentally friendly option replaces the plastic top seal film and makes both the PET tray and lid now entirely recyclable.

Though his operation may have achieved groundbreaking milestones over the years, Mucci isn’t one to forget the roles of 1,400 dedicated staff in Canada and the U.S. Heavily invested in employee well-being, Mucci places a high degree of emphasis on employee engagement and recognition, says Saxena.

Seeing the number of migrant workers who bike to work daily, Mucci encouraged the launch of the Ride Safe Program which equips workers with helmets and reflectors to reduce fatalities on the road. “We would not have this industry if these guys were not here. The greenhouse industry wouldn’t even exist in Leamington,” says Mucci. “Mucci Farms employs several migrant workers,” adds Saxena, “some of whom have been returning yearly for over 25 years, with a recent retiree who completed 39 years of service!”

Seeing the number of migrant workers who bike to work daily, Mucci encouraged the launch of the Ride Safe Program which equips workers with helmets and reflectors to reduce fatalities on the road.

To engage the next generation of horticulturalists, Mucci’s next pilot project is to invite groups of 10 to 20 students on a monthly basis from local post-secondary institutions. He hopes that this experience will give them a real-world look at what different greenhouse positions entail. “I think that’s how we’re going to bring in most of our growers,” he says. While many greenhouses are looking abroad, he’s aiming to attract and engage more domestic talent. “There’s rapid expansion happening in the industry, and they are just getting gobbled up as quick as they come. There are kids out there that have a real passion for growing vegetables.”

To engage the next generation of horticulturalists, Mucci’s next pilot project is to invite groups of 10 to 20 students on a monthly basis from local post-secondary institutions.

Giving back to the community has always been an important part of Mucci’s work. “Under his direction, fresh produce is donated to multiple schools in the area on a weekly basis to promote healthy eating,” says Saxena.

More recently, Mucci partnered with Transition to Betterness, a local charity in Windsor that focuses on improving the lives of patients and their families struggling with life-altering illnesses. Together, they’re building a small vegetable greenhouse at Hotel-Dieu Grace Hospital in Windsor, and it’s slated to open this fall. “A first of its kind in Canada, the greenhouse will serve a dual purpose of growing fresh produce for the hospital and as a healing garden for patients,” says Saxena.

A husband and father of two, Mucci juggles a busy schedule but still places great emphasis on family and his own personal health. “I run a lot, and I work a lot,” he says, laughing. “I love my family [and] it’s a great help having them on my side.”

Running ‘a lot’ is clearly an understatement. This humble 51-year-old powerhouse has completed the Ironman triathlon competition more than once, along with several other marathons over the years.

“His passion for long distance running also birthed a fundraising campaign for the Make-A-Wish Foundation with an event called ‘50k for 50k’ – a grueling 50 kilometer run,” says Saxena. “Not only did Bert complete the race in a little over three hours, he exceeded the $50,000 target by $65,000! A total of $115,000 was raised, which made a wish come true for 12 terminally ill children rather than the original target of four.”

Known to inspire and lead by example, those around him say his ability to turn defeat into victory is both contagious and admirable, both on a professional and personal level. “His humility keeps him behind the scenes, but his contributions to the industry and the lives of others is abundant in our company and community,” says Saxena.

“Part crop manager, part administrator, and part visionary… Bert is one of the best in Canada,” says Dave Harrison. Now retired, the former editor of Greenhouse Canada magazine had interacted with a number of growers in his 25 years at the helm, and there was no doubt that Mucci was a deserving recipient of this year’s Grower of the Year award. “He sees greenhouse horticulture as more than existing plants or product lines, but something in which to tap new opportunities in production, harvesting, automated packaging and marketing. The future of the industry rests with people such as Bert.”

“The greenhouse industry is the most interesting thing you can imagine because it changes yearly,” Mucci muses. “The way we grew a tomato, even five years ago, has changed. There are always new developments, new systems, new techniques for growing. Differences in greenhouse construction itself changes yearly. There’s so much involved.”

Amid an industry that is always in flux, Mucci says one thing hasn’t changed in the past 30 years – his source of motivation. “I want to be the best at what we do, and that is growing produce.”