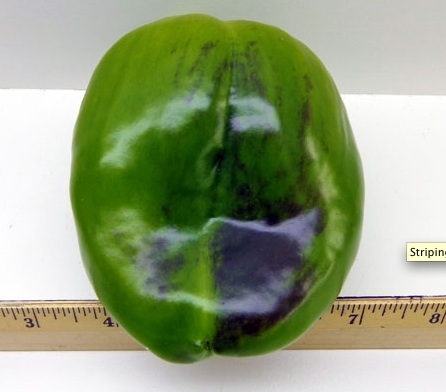 October 15, 2012 – Bell peppers (Capsicum annuum L) are a warm season, annual crop and in northern climates they are set out as transplants during late May to late June. Transplanting brings the plant into flower sooner, increasing economic yields. Fruit size generally drops over time with the first flowers producing the largest fruit. Therefore, staggering plantings during this period helps growers maintain fruit size and harvest volume.

Day and night temperatures have a significant effect on pepper yield and fruit quality. Peppers grow best in temperatures between 70 and 80 F. Temperatures that vary outside this range can have detrimental effects on yield and quality. Temperatures can be too high for plant growth, but the biggest effect due to high temperatures is on fruit set. When temperatures are above 90 F during the day and 75 F at night, the flowers tend to abort, reducing fruit yield.

At the other extreme, any flowers developing and blooming in September will not have time to produce fruit. Also, immature fruit going into September often will not elongate to the desired length or will be misshapen.

Temperature also influences colour. Purple pigments develop best under cool temperatures. That is why it is hard to grow solid coloured, purple varieties during July and August. It is just too hot and the fruit ends up with purple stripes rather than a solid purple. Purple is the immature colour, so these peppers often go red since producers wait for the purple colour to develop.

Cool temperatures are also the reason why some green varieties develop purple striping in September and October. This purple striping has no influence on flavour, but many produce buyers and consumers hesitate to purchase a pepper that is not solid green.